As many of you know, last week my dear friend Dori was laid to rest after her 16- month battle with brain cancer...and you know of her family's battles through the nightmare of the health care fiasco known as ObamaCare. The battle is over for Dori but it has just begun for the rest of us.

And that battle begins with us knowing that ObamaCare is a LIE...NO other way to say it. It is NOT health care nor is it affordable as its actual name...The Affordable Care Act (ACA)...claims it to be. ObamaCare from its inception to its roll out to its subsequent implementation is NOTHING but one big scam to 'insure', if you will, the 'sponges' of our society so they stay in the voting pocket of the Democratic party and NOTHING else.

Obama loves to claim that to date more than eight million Americans have signed up for health insurance through the exchanges, but the truth is more like eight million Americans have perused the Healthcare.gov website and put something into their shopping cart, but have NOT paid that all-important first premium...thus denying the program the dollars needed to keep ObamaCare afloat. And Obama knew this would happen for he knows...and has always known...ObamaCare's inherent flaws.

And while we conservatives know well ObamaCare's flaws...like the death panels with the 15-member bureaucratic cabal of DC fat cats who will decide who gets to live and who gets to die...like rationed medicine for the rest of us...and all the other medical peccadilloes that are the hallmark of ObamaCare, but what most don't know is that something very dangerous was snuck in ever so sneakily and will affect us all...and that is that drug prices for ALL prescription drugs will be substantially going up to cover for the monies needed but NOT gotten to keep ObamaCare afloat. Obama knew the true sign-up numbers would NEVER allow ObamaCare to survive...so drug prices and sign-up numbers have been manipulated to subsidize almost the entirety of the ACA. 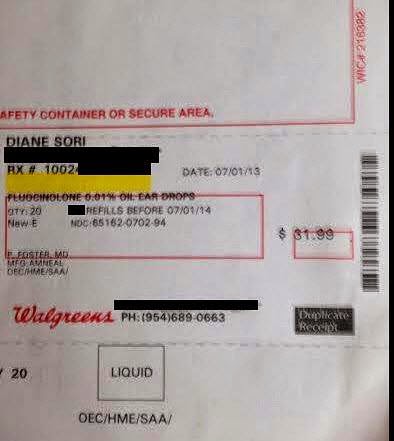 And now I will tell you just how much of a drug price increase you will face and it will shock you like few things in ObamaCare have done before...and I experienced it firsthand. A few months ago I was given a prescription with a few refills for Fluocinolone Acetonide Oil...an ear drop...to be used once a week...the cost at Walgreens was $31.99. A few days ago I had to have it refilled and was blown away when the exact same Rx that I bought NOT long ago now costs $215. There was NO change to the composition of the Rx...NO change to the amount in the bottle nor to the packaging. The Rx did NOT have to mixed as it came pre-packaged and ready to be sold so there was NO justification for any price increase let alone an increase of close to 700%. 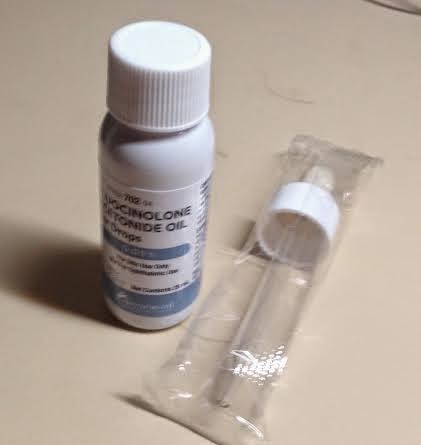 Yes, the price increase from $31.99 to $215 is a whopping 700% for a simple ear drop...welcome to yet another piece of the nightmare that is ObamaCare.

Needless to say Walgreens was told to keep their Rx...told after a few choice words of this is out and out robbery, a scam, and that I would go elsewhere. Walgreens claimed the price was raised by corporate headquarters and that all Rx prices were being raised...and guess why...ObamaCare.

Being raised a few dollars is one thing...a 700% price increase is quite another...and this for simple ear drops. Now imagine the price increase for serious medications like those used for cancer or heart disease...imagine how these increases will affect people who cannot afford it. The outcome is they will die without their needed medication... culling the herd in ObamaSpeak if you will...and that equates to more monies saved on the ill and elderly that Obama can now use to buy even more votes for his party of opportunistic socialist traitors.

But it gets even better...it seems there is something the pharmacists and pharmacy personnel know about but won't tell you... something they did NOT tell me...and that is that there are money saving coupons directly from the drug manufacturers that you can use for your needed Rx...any Rx at most major pharmacies. Even though I was NOT told about this I had an inkling about it so when I got home I typed in the name of my ear drops... Fluocinolone Acetonide Oil...and what I found will simply blow you away for the original $31.99 ear drops that I purchased at Walgreens that they now wanted $215 for, with the said coupon would now cost $86.52...resulting in a loss to Walgreens of a $128.48 mark-up profit. 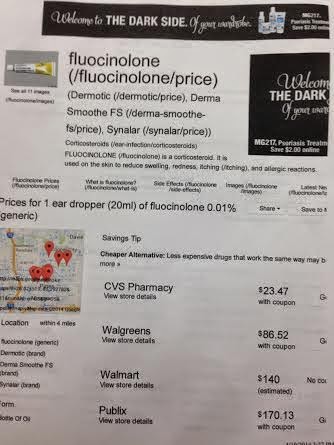 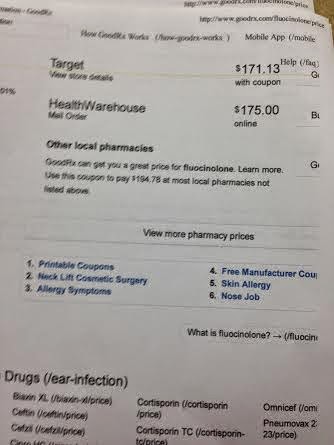 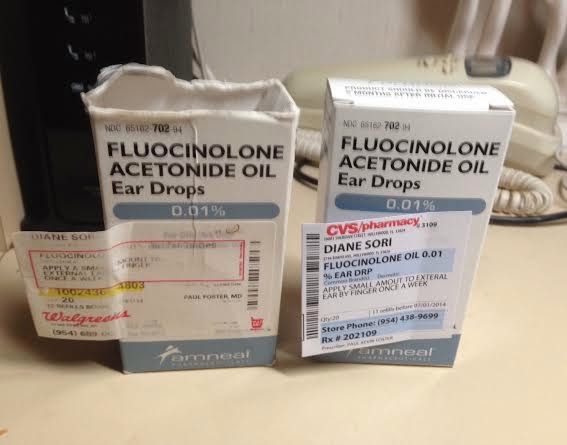 So from a high without the coupon of $215 at Walgreens to a low of $23.47 with the coupon at CVS that is a savings of $191.53...making this NOTHING short of highway robbery, thievery, fraud, a scam, and an out and out criminal act perpetrated NOT by the drug manufacturers who offer coupons to bring drug prices more in line with the manufacturing cost, but by the pharmacies themselves under the auspices of their corporate headquarters who are in bed with the greed and robbery perpetrated under ObamaCare.

Greed and robbery and NOTHING less for if CVS can sell my Rx ear drops for a mere $23.47 and still make a profit that shows how much the ear drops really cost to make, and that shows the mark-up the other pharmacies have attached to the Rx NO matter with the manufacturer's coupon or without it. And with the great discrepancy in cost at the other pharmacies it boils down to the specific greed...the specific mark-up...each pharmacy is willing to stick to the customer.

And all this drug price manipulation has been for the most part kept from the public as it's buried deep within ObamaCare's over 2000 pages that the Democrats passed before reading it. Sure we know that drugs are marked up and NO one is denying a for-profit drug company from making a just and fair profit...after all new drugs are costly to develop and bring to market...but when out-of-line profits are made by greedy pharmacies whose corporate offices set the drug prices they charge their customers for something they just dispense and NOTHING more, that in my opinion is paramount to grand theft of the first degree.

And adding into this thievery is the fact that health insurers are sorting... manipulating really...drug prices into a complex tier system that in some cases see drug co-payments and co-insurance fees rising as high as 50%. Also, with a general overall decline in the medications that are covered under ObamaCare, that leaves patients on the hook for thousands of dollars, and with about 70% of Americans using prescription drugs at any one time that amounts to a lot of money...a lot of profits being made at the expense of the patient. And those new to ObamaCare who rely on multiple sometimes very costly drugs face the greatest burden from the increases in the co-payments and co-insurance fees. So the fine print in ObamaCare really must be paid attention to as the screwing of 'We the People' continues on.

Simply, it's NOT big pharma that is in cahoots with Obama and the left as most believe...it's the corporate headquarters of the pharmacies that set the prices they sell big pharma's drugs for, and the ObamaCare insurance companies that sell the policies that manipulate the prices that are to blame. But remember, to the rescue are the drug manufacturer's coupons that the pharmacies and insurance companies do NOT want you to know about (as it cuts into their profit margin) for there are coupons for almost every drug made including the ones used to treat cancer and heart disease...you just have to go online and search for them.

Search to get them and you too will be amazed by the price discrepancy in drug prices from pharmacy to pharmacy as those in cahoots with Obama try to manipulate and use the sick and elderly to keep the monstrosity that is ObamaCare afloat.

Here are two links to two different sites that offer literally thousands of manufacturer coupons that save you up to 75% on brand and generic prescription drugs, including drugs used to treat cancer, heart disease, and other major illnesses in addition to routine antibiotics and such: http://www.goodrx.com/ and http://www.rxpharmacycoupons.com/medication-list.h...

So the bottom line in all this is do NOT get sick for ObamaCare will get you one way or another...sad isn't it.