Op-ed:
Benghazi...word games vs the truth
By: Diane Sori 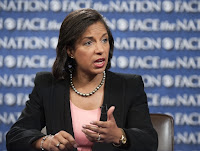 Benghazi...just the word reeks of cover-ups and lies.

Benghazi should have brought down this president...should have exposed the truth about what Ambassador Stevens discovered...should have given new meaning to aiding and abetting the enemy...

Benghazi should have done all this but sadly did none of it because those in power are still arguing over the words, 'terrorism' vs 'video.'

And enter center stage into the mix Obama's willing sacrificial lamb, UN Ambassador Susan Rice, who became the queen of the talk show circuit who did Obama's dirty work for him...the woman who filled the airways with lies about a video knowing it was anything but a video...knowing the truth but hiding it well.

That is until yesterday.

Susan Rice, testifying behind closed doors before Senators John McCain, Lindsey Graham and Kelly Ayotte, gave an oh so obviously rehearsed testimony and issued a written statement, and when you filter out all the flowery words used to divert blame and attention off herself it comes down to to one of two things..she either bold faced lied on her own accord to cover for Obama knowing full well that she was on his short list for the coveted Secretary of State position she so desperately wanted or she was deliberately given erroneous information from higher ups to keep Obama's culpability in the four deaths out of the limelight through the election.

And that she did in either scenario aided by a media who have been in Obama's pocket since he first appeared on the national scene.


At the meeting Rice continued to insist that the statements she made on the Sunday, September 16th, talk shows were based on 'talking points' provided by the intelligence community, but she did acknowledge that she had been wrong to say Benghazi was caused by a video but that she never intended to deceive the American public.

And even while continuing to blame the CIA for providing her with that information, Rice would NOT acknowledge that the Obama administration had known for days that the attack on our consulate was a terrorist attack. So, once again someone in this administration refuses to take blame for their own actions.


After her testimony the three Senators said they were more confused than ever before. In fact, Senator Grahm said he was 'more disturbed' after Rice's testimony...'more disturbed' goes way beyond mere confusion.


"It is clear the information she gave the American people was incorrect when she said that it was a spontaneous demonstration triggered by a hateful video," McCain said after the meeting with Rice. "We are significantly troubled by many of the answers that we got and some that we didn't get concerning evidence that was leading up to the attack on the consulate," continued McCain.

All in my humble opinion of course.

So stop with the arguing over what started the attack and get to the why it happened...and hold those involved accountable for it.

"We the People' demand no less.