'More of our elections going forward will feature' divisive tactic 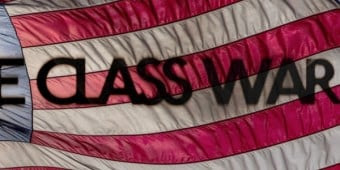 A George Soros-funded radical think tank with close ties to the Democratic Party has launched a new website urging politicians and activists to wage class warfare while hailing what it calls a new era in politics – the use of class warfare to win elections.

WageClassWar.org was launched last week by the Campaign for America’s Future, or CAF.

CAF’s co-director, Robert Borosage, explained the need for such a website.

“America’s growing diversity and its increasingly socially liberal attitudes played a big role in this election. But looking back, we are likely to see this as the first of the class warfare elections of our new Gilded Age of extreme inequality,” he wrote in a statement.

“More and more of our elections going forward will feature class warfare – only this time with the middle class fighting back. And candidates are going to have to be clear about which side they are on,” he wrote.

Continued Borosage: “In 2012, candidates who supported the economic interests of the many over the few won their elections. Populism was the voice, but economic opportunity was the message. The pundits may wring their hands, but in the future it won’t be values voters, angry white men or soccer moms that win elections. It will be class war.”

The website does not feature a mission statement and is unclear about exactly how the group will go about attempting to wage class warfare.

The site explains how Obama’s 2012 campaign utilized class warfare and set the stage for the deployment of such tactics in future elections.

“Obama’s campaign built its message on class war battles that broke out in the Republican primary, as challengers sought to bring down ‘the main from Bain,’ Mitt Romney,” notes the site.

“In the end, the keys to Obama’s reelection were his calls for raising the taxes of the wealthy and his support for reinvesting those revenues in education and jobs to rebuild the middle class and to protect programs like Medicare from cuts.”

The site hails how Obama repeatedly portrayed Romney as a “walking example of the out-of-touch elite, an opponent of the auto industry bailout that saved an entire manufacturing sector, and a 1 percenter who would jeopardize social programs, education, and Medicare in order to cut taxes on his rich friends.”

CAF writes that Obama’s reelection now sets the stage “for class warfare as a potent and necessary tool to promote rebuilding the economy from the bottom up, rather than perpetuate the right wing’s failed trickle-down policies.”

WND previously reported how CAF has partnered with Occupy.

CAF is funded by Soros’ Open Society Institute as well as by the Soros-funded Tides Center, which channels funding to hundreds of progressive and far-left groups.

Tides has been connected to the Occupy movement since its beginning.

Another grantee of Tides is Adbusters magazine, which is reported to have come up with the Occupy Wall Street idea after “Arab Spring” protests toppled governments in Egypt, Libya and Tunisia. The Adbusters website serves as a central hub for Occupy’s planning.

MoveOn.org, which has joined Occupy, is funded by Tides. CAF’s board of directors includes MoveOn.org President Eli Pariser.

CAF is deeply tied to progressive politicians from the Democratic Party, many of whom routinely are featured at CAF events.

In 2008, Rep. Jan Schakowsky, D-Ill., was honored at CAF’s annual dinner for her “advocacy in Congress,” noted Discover the Networks.
Posted by Diane Sori at 5:25 PM