And the craziness that has overtaken Ferguson has made its way to New York City.

Coming on the heels of the recent grand jury decision NOT to indict Officer Darren Wilson in the shooting death of thug Michael Brown, this past Wednesday, a Staten Island grand jury decided NOT to indict police Officer Daniel Pantaleo in the 'so-called' chokehold death of Eric Garner last July, in a case that included possible charges of second-degree manslaughter, criminally negligent homicide, felony assault, or reckless endangerment.

And again the 'element' came out in force to protest this decision, simply because like in Ferguson the officer was white and the dead man was black. It did NOT matter that an indictment could legally only be rendered if they found malice or intention to physically hurt Eric Garner or if they found thata gross disregard for his well-being is what led to his death, meaning that even if they believed that Officer Pantaleo was careless or that this was a botched arrest it does NOT mean that it rose to the legal level of a crime.

And let's be clear right upfront...this incident was NEVER about the man's race as certain folk made it for Garner was NOT racially profiled, but was approached for a petty crime that should have stayed on a local level as a local incident. But simply because of the color of his skin it became another cause de jour for the race-baiters and white-haters and made into national sensationalism by non-stop media fodder.

Captured on video snippets by a friend of Garner's and seen around the world via the internet, one would think this case would have been cut and dry but being privy to facts the public does NOT see or know...including what happened before the friend's cellphone recorder was turned on which, by the way, was fairly late in the altercation...after viewing the video and hearing from both black and white witnesses in dozens of interviews with said witnesses that included 22 civilians, and after hearing the words of the officer who actually 'supposedly' used a chokehold on Garner, the jurors decided there was NOT enough evidence to bring an indictment against Officer Pantaleo.

In his testifying before the grand jury, Pantaleo said he had NO intention of choking Eric Garner (who like Michael Brown was a 'giant' of sorts and towered over the officers in both his 6 foot 5 inch height and his 400lb. weight) who was once again being arrested for selling 'loosies' on the city streets (which are untaxed cigarettes whose selling became an offense this past January in a law put in place by former NY Mayor Michael Bloomberg to protect tax revenues)...but that he was using a legally allowed maneuver known as a 'takedown maneuver' or 'submission hold' in an attempt to subdue the belligerent Garner who was resisting arrest. And while this maneuver did NOT...I repeat NOT...directly cause Garner's death, it did trigger off his many pre-existing conditions that together contributed to his death...serious pre-existing conditions the officers had NO knowledge of...and being that Garner did NOT directly die from choking this decision was legally just.

But as expected with this yet another NO indictment decision, once again white-hating AG Eric Holder butt in to announce that federal officials would move ahead with a civil rights investigation against Pantaleo just like he announced the same investigation would move ahead against now-resigned Officer Darren Wilson in the Ferguson case. And isn't it oh-so convenient that Holder 'forgets' that in this case the fact that Pantaleo’s actions were supervised by a black female sergeant, a civil rights case would most likely be dismissed. Bet you did NOT know that...more on that in a bit.

But NO matter as once again when race-baiters like Eric Holder do NOT like a rightful jury decision against a black man out comes the always close-at-hand race card whether it is warranted or NOT.

And with words like that adding even more fuel to the fire insinuating that blacks can do NO wrong and the police are always the bad guys, it's important to repeat again that Eric Garner had been arrested eight times within this past year alone for the very same infraction, and his resisting arrest basically said 'screw you I'll do what I want' to the officers, and that helped lead to his death.

But let's again be clear here...in NO way am I saying that Eric Garner deserved to die over 'loosie' cigarettes...he did NOT...but his actions in resisting arrest did contribute to his death just like Michael Brown's actions contributed to his death. 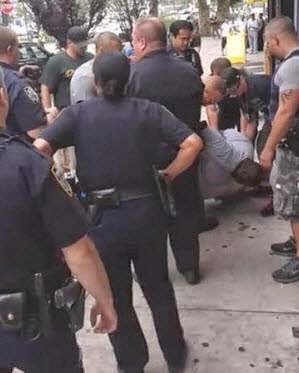 And while Garner did indeed yell "I can't breathe," an important fact must be pointed out that does NOT meet the race-baiters and white-haters narrative, something which they want desperately to be kept hidden. And that fact is that the police sergeant 'on scene' supervising Officer Pantaleo even as he placed Garner in the 'supposed' chokehold was a BLACK female sergeant named Kizzy Adoni. This one fact alone should have taken race out of the equation right from the start, because throughout the incident Sgt. Adoni did NOT intercede to stop the actions of Officer Pantaleo. And why was that...because he did NOTHING that breached accepted police protocol.

But shhhhh...that one oh-so important game-changing fact must be kept under lock and key because then the race-baiters and white-haters would have NOTHING to stir up their 'brothers' with.

And if one looks closely at the video in question and putting emotions aside, while you will see the officer's arm around Garner's neck as he tried to subdue him you will also see that there were NO hands...I repeat NO hands...around Garner's neck choking him at any time including the four times he said the words about NOT being able to breathe. And the very fact that he could speak...and speak clearly...proves he was NOT being choked for the fact is that if one is being choked one cannot talk let alone talk clearly, and the autopsy showed that Garner did NOT die of asphyxiation which would have been the case had he been choked. And these were facts the grand jury had to rightfully consider when reaching their decision.

Also taken into account by the grand jury was Garner's belligerence towards the officers and the physical waving of his arms in what could be perceived as a threatening manner...which also can be briefly seen on the video...when told to put his hands behind his back to be handcuffed. Logic and common sense should tell one that you do NOT question or argue with an officer when they order you to do something...that is something that the jurors also had to take into account in this case, but the 'element' as always ignores that one simple important fact.

And within a few short hours after the decision was announced parts of the city were 'choked' with protesters interrupting the flow of traffic...in fact shutting down West Side Highway which in and of itself is breaking the law yet NO one was arrested...and forcing businesses to close as they yelled "No Justice. No peace. No racist police." And here's a thought worth considering... isn't it quite odd that 'miraculously' professionally made signs that corresponded with the words yelled are made, distributed, and held up all over the city...and in cities across the country... makes you wonder who exactly is NOT only financing this protest but the Ferguson protests as well for the time frame for professional signs appearing is eerily similar in both.

Need any help in guessing who's behind some if NOT all this unrest...do the names Barack HUSSEIN Obama and his cohort Al Sharpton come to mind. While in NO way part of the police action itself or in the grand jury's decision, both men are race-baiters who, like Eric Holder, hate whites and who love to spew words to inflame and encourage racial hatred and atomicity...and line their own pockets...(I believe) both figuratively and politically...in doing so.

Case in point...inserting himself dead center into the mix was Al Sharpton who held a press conference to damn the grand jury's decision...a jury made up of 14 white and nine nonwhite members with 12 jurors being in agreement needed for a decision and with leaked word being the decision crossed racial lines...and to damn the NYPD as well. After hearing the decision that was NOT to his liking Sharpton claimed that the "Grand jury systems on state level are broken," and called for a civil rights summit to be held after a planned DC march on December 13th.

Adding that “The federal government must do in the 21st century what they did in the mid-20th century — federal intervention had to come into the South to protect people’s civil rights and voting rights...Federal intervention must come now.” I just want to know from racist Sharpton does that include the civil rights for all the whites murdered in cold blood by blacks...like the sweet little baby shot point blank in the face by a black thug...or the murder by blacks of a white Marine and his pregnant wife...or when 50 blacks descended on a Minnesota white man and beat him to death just because he was white...need I go on.

And whether Obama and his ilk like it or NOT race relations work both ways...or should. We do NOT need to hear Obama's ad-nauseum words about his "concern on the part of too many minority communities that law enforcement is not working with them and dealing with them in a fair way." How about his saying that too many of his 'bros' act like 'animals' when jury decisions do NOT go their wanted way. Now those are words more truthful than his.

And we do NOT need the likes of Representative Hakeem Jeffries (who represents parts of Brooklyn and Queens) calling the decision "a miscarriage of justice" an "outrage" and a "disgrace." We do NOT need ubber leftist NY Mayor Bill de Blasio saying that he had received 'assurances' from Washington that the federal investigation of Garner's death would move forward "expeditiously and with a clear sense of independence" nor do we need his words that the grand jury decision has created "a national moment of pain, a national moment of grief and searching for a solution."

And we sure do NOT need the media's one-sided biased form of journalism that refuses to see or report on both sides of any incident involving blacks. Remember, if Officer Pantaleo had been black and the dead Garner had been white you NEVER would have heard about this at all...there would be NO protests...there would be NO calling for police retraining, and the likes of Al Sharpton, Eric Holder, and Barack HUSSEIN Obama would be forced to keep their big mouths shut.

So with the minority 'element' within the black population still behaving badly, sadly it's come time for 'so-called' white America to realize that whenever something happens to a black person that some in the black community do NOT like, the ad-nauseum narratives spoken by 'supposed' black leaders will ring louder than any truth that is fact, and that once healing race relations in America will take yet another step backwards as those same 'supposed' black leaders with a smirk on their face continue to line their pockets for political gain at the expense of those they call 'brothers.'

And that my friends is the saddest thing of all.