The House of Representatives on Thursday approved a $3.5 trillion budget plan proposed by Rep. Paul Ryan (R-Wis.) on a 228 to 191 vote, largely along party lines. 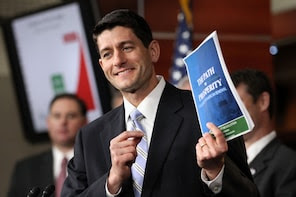 The plan aims to curb exploding deficits through deep cuts in domestic programs, while lowering tax rates for individuals and businesses.

The plan will be rejected by the Democratic-majority Senate. But the House vote is significant for the opportunity it presented both parties to lay down a marker on the nation’s key fiscal issues heading into the November election campaign.

The House vote breakdown was 228 Republicans in favor, 181 Democrats and 10 Republicans opposed.
Republicans said the budget represented an honest attempt to tackle the nation’s growing trouble with debt.
“We have an obligation, not just a legal obligation, but a moral obligation to do something about it,” Ryan said on the House floor Wednesday.

But Democrats said it would cut deficits by hitting programs relied on by the poor and vulnerable, like Medicaid, food stamps, education and other programs.

They said they were eager to use the Ryan plan as the linchpin of an election year argument that Republicans favor the wealthy over the middle class and are using deficits as an excuse to shrink domestic programs they’ve long opposed.

“Because our Republican colleagues refuse to ask millionaires to contribute one cent to deficit reduction, they hit everyone and everything else,” said Rep. Chris Van Hollen (D-Md.) during House debate Wednesday.

White House spokesman Jay Carney said Thursday that the Ryan plan would create “a segmented replacement for Medicare that would burden seniors and end the program as we know it.”

In many ways, the debate and the vote were a repeat of a House debate over a Ryan plan introduced a year ago. Democrats were convinced they won the political upper hand in that battle and have signaled they will use Ryan’s plan and its Medicare adjustments through the November election.

But the GOP is convinced that independent voters are deeply concerned about government spending and that their passage of a detailed budget plan undercuts President Obama portrayal of a do-nothing Congress. The Senate, by contrast, has not passed a budget in three years.

Under Ryan’s blueprint, the Medicare eligibility age would rise over time beginning in 2023 from 65 to 67. In the future, seniors would be given government assistance to purchase private health-insurance plans or could continue to take part in the current fee-for-service model. Spending would be capped, meaning risks and costs could shift to seniors as health-care costs rise.

The plan also would set agency budgets for the fiscal year that begins Oct. 1 at $1.028 trillion — $19 billion less than agreed to in the difficult deal to lift the nation’s debt ceiling over the summer.

Republicans in the House will now work to design appropriations bills that specify line-by-line budgets for federal programs around the lower number, setting up a potential clash with the Senate in the fall as the fiscal year ends.

They will also work to flesh out tax system overhaul plans laid out by Ryan. He proposed collapsing the six individual tax brackets into just two brackets, taxed at 10 and 25 percent. To cut the top rate to that level, from 35 percent, he suggested closing loopholes and ending subsidies.

Some analyses suggest the only way to generate that kind of revenue would mean raising the tax burden on middle-income earners to pay for the lowered tax rate for the wealthy. Republicans insist wealthy taxpayers benefit disproportionately from loopholes, and they are committed to a progressive code with lower rates.

Ryan’s budget would cut $5.3 trillion from deficits over the next decade, bringing deficits down from more than 8 percent of gross domestic product to 1.2 percent by 2022.

It would not balance, however, until 2040. Conservatives with the Republican Study Committee who want to cut spending more quickly introduced their own spending plan that called for balancing the budget within five years. It was defeated earlier on a 136 to 285 vote.

A Democratic budget authored by Van Hollen, which would cut deficits more slowly than the Republican plan with less severe cuts in federal programs, failed Thursday on a 163 to 262 vote.
Posted by Diane Sori at 6:06 PM