If only Sarah Palin had run ... 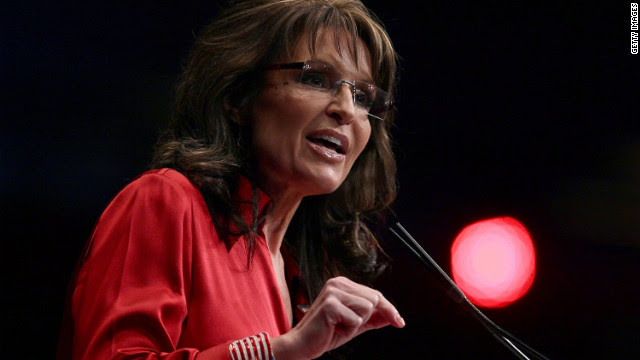 
STORY HIGHLIGHTS
Editor's note: Timothy Stanley is a historian at Oxford University and blogs for Britain's Daily Telegraph. He is the author of the new book "The Crusader: The Life and Times of Pat Buchanan."

(CNN) -- The Republican presidential primary hasn't exactly overflowed with talent. In December, it was a roll call of the undesirable Right: Romney, Santorum, Gingrich, Paul, Perry, Huntsman and Bachmann -- a list so long and bizarre that Count Dracula could have slipped in on the end and no one would have noticed. Except, as the citizens of Chicago will tell you, the dead always vote Democrat.


Now, we're down to a final three, discounting Ron Paul, who, I'm guessing, is only staying in the race to collect air miles. Although the talent pool has shrunk, it has gotten no deeper. As Mitt Romney suffers defeat after defeat at the hands of Rick Santorum, whose chances of winning this thing aren't high, his negatives mount up, and the president looks stronger by the day. The Republican Party is divided and in danger of becoming out of touch.

It didn't have to be this way. If Sarah Palin had entered the contest, I'd hypothesize two alternative realities. One, she'd have the nomination sewn up by now. Two, she'd be running even in the polls with the president.

What have proved to be problems for the top three candidates wouldn't have been problems for Palin. For starters, she has none of Newt Gingrich's intellectual hubris. There's no way Palin would have promised to put a mine on the moon or suggest arresting judges who make decisions that are too liberal. Her conservatism is far more domestic and down-to-Earth.

Timothy Stanley
She's also more disciplined than Santorum. Although we'll probably be talking about them into the next century, Palin's only two serious public gaffes in 2008 happened when she was unable to name a newspaper and was stumped by the Bush doctrine, both slips a product of ignorance. Santorum, on the other hand, is guilty of knowing his own mind all too well, offering unwelcome opinions on everything from the evils of hard-core pornography to the racial politics of the Trayvon Martin tragedy.

Compare the response Palin gave to questions about her attitude toward evolution -- "I think it should be taught as an accepted principle, and I say that also as the daughter of a schoolteacher" -- with Santorum's claim that Satan ... has attacked America.

It's Palin who seems to have a better sense of the limited role that faith should play in politics and a better idea of when to keep her mouth shut. Moreover, she would never tell a journalist that he was talking "bull***t," even if she did congratulate Rick Santorum for doing so. Contrary to the media narrative, even at her most accident-prone, Palin has always been a classy, well-choreographed performer.

Lacking the foibles of Gingrich and Santorum, Palin would have been a far more effective anti-Romney candidate because her strengths accentuated Romney's weaknesses. Romney is known as the Etch A Sketch candidate; Palin is aggressively authentic. Romney is seen by many as a moneyed elitist; Palin is the conservative class warrior, happy to slam the "crony capitalism" that benefits both big labor and big business. Romney's limitations have been revealed, one by one, in the course of the primary campaign; Palin was well-vetted by the press in 2008 and has nothing left to say or do that would surprise us.

Love her or loathe her, we all know who Palin is. Her weaknesses, being old news, wouldn't have dominated the primary narrative like Bain Capital or Seamus the dog, made famous by his terrifying ride atop Romney's car. Palin would have spent the past three months attacking her opponents. Then she would have turned her guns on the president.

While it's reasonable to speculate that Palin could have gathered a much stronger anti-Mitt coalition earlier -- and broken out as the GOP front-runner sooner -- it's probably a bigger stretch to say that she would be running stronger against Obama right now.

The last national polling done on a hypothetical Palin candidacy was in September, and that showed the president beating her by double digits. Daily Kos did the math and gleefully calculated that Palin would win just seven states in November, and even Mississippi would be a tossup.

But those polls asked the public what they thought of a candidate who hadn't declared, who wasn't representing herself in the debates and who was still solely defined by the 2008 race. Guesstimating how well she would have done had she entered the 2012 contest is tough, but considering that at least some polls show both Romney and Santorum within a few points of Obama despite all their problems, it's not unreasonable to presume that Palin would run just as well.

Subtract Santorum's gaffes or Romney's elitism, and she might even do a little better. Polls suggest that many voters agree with Romney's approach to the economy but think he lacks empathy for the struggles facing the middle-class. Were she in the race, you can bet your bottom dollar that Palin wouldn't score so low on compassion and authenticity.

Most important, Palin has the character and reputation necessary to break out of the Republican Party's demographic prison. In matchups with Obama, Romney's core vote is financially comfortable seniors. He pulls even among all men and folks aged 35-54.

The Republicans desperately need a candidate who can appeal to lower-income voters, who can rally men, who can gain women's votes, who can bring out conservatives in large numbers and who can appeal to a younger demographic. All these things happened in the 2010 midterms, when the GOP made inroads into blue-collar households and middle-class suburbs on a policy platform virtually embodied by the Alaskan maverick.

The GOP needs a Tea Party candidate -- either Sarah Palin or someone very like her. Alas, it's going to have to wait until 2016 to get its rogue.
Posted by Diane Sori at 11:38 PM