Op-ed:
A dream sidetracked by a case fueled by hate
By: Diane Sori

"I have a dream that my four children will one day live in a nation where they will not be judged by the color of their skin but by the content of their character."

And so said great American Reverend Dr. Martin Luther King, Jr. on August 28, 1963...a dream that all men of conscience long for...a dream sadly perverted and twisted by those who feed the flames of racial hatred...racial division...and 'supposed' racial inequality.

And notice I said 'great American' NOT great Black American because I judge Dr. King by the 'content of his character' NOT by the color of his skin.

But it's so sad that this great man's dream has been dishonored and ignored by a legion of today's 'supposed' black leaders...black leaders who revel in using their blackness to spew hate...leaders who put aside everything Dr. King stood for and hoped for...black leaders the likes of Jesse Jackson, Al Sharpton, Louis Farrakhan, and the worst of all...Barack HUSSEIN Obama...all who (I believe) have knowingly, willingly, and with malice, set race relations in this county back 50 years or more...and I would safely say that Dr. King would shake his head in disgust for this was NOT his dream.

All these men make everything about race whether it deserves to be or NOT...all these men maneuver their way into affairs they have NO business butting into...all these men twist and distort facts to play into their hatred of anyone NOT black, and use misplaced jealousy and perceived feelings of injustice at the hands of whites to make any and everything a racial issue.

And all these men get away with this because they know most cower in fear of the race card being used against them...so they throw the hopes and dreams of Dr. King aside to push forward with their hate-filled agenda. 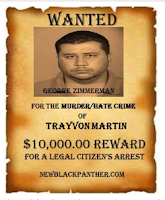 A perfect case in point is the ongoing Trayvon Martin murder case...a case in which all these men have put their two cents into. Instead of keeping their thoughts to themselves...instead of closing their eyes to the color of the skin of those involved these men took a simple case of self-defense and turned it into a theater of the absurd where it became all about race instead of about the facts and the evidence involved.


All these men spoke in the public venue damning the killing (without knowing the facts) as a white man killing yet another black boy just because he was black and for NO other reason. All these men kept at it...fueling the hatred on...forcing George Zimmerman, the accused killer, into fear for his life from people...people like the New Black Panthers...who condemned him, convicted him, and put a bounty on his head by finding him guilty without so much as a trial...just because he was white and the victim was black, and for that reason alone. 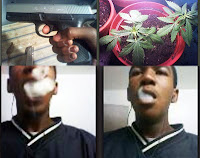 But the facts speak otherwise including facts that the bleeding heart liberal judge will NOT allow into evidence...facts like the oh so sweet picture of Treyvon blasted all over the media and the internet was 5-years old and NOT the person killed that night. The Trayvon killed that night was a young man recently suspended from school for drugs (in fact here are photos of home-grown pot plants, him smoking dope, and holding a gun all in his cell phone)...a young man who had bulked-up, was strong, and a devotee of the martial arts...a young man who knew NO one in the gated townhouse community he was 'supposedly' cutting through, yet there he was aimlessly wandering around in that gated community that had recently reported a rash of break-ins and robberies to the police.


And none of this is allowed to be said.

And notice I say NOTHING about the color of Trayvon's skin for the color of his skin has NO bearing on this case...at least it doesn't for those of us who look at the evidence and the facts NOT at the fabricated racial garbage spewed out by the media, the left, the rabble-rousers, and all 'those men' who are fueled by racial hatred alone.

And what of George Zimmerman...the man who was clearly overpowered by the young bulked-up, strong, martial arts devotee...the man who had his head pounded into concrete by someone possibly hyped-up on drugs...the man whose injuries can be clearly seen in hospital and police photographs as being on the receiving end of a brutal beating...that man is being charged with second degree murder for acting in self-defense for shooting a young man many claim was just in the wrong place at the wrong time...but I don't think so for I believe, and it's my opinion alone being said here, that Trayvon Martin was in that gated townhouse community to break-in and commit robbery to feed his drug habit, and that Zimmerman caught him.

There, I said what many are thinking and without a mention of anyone's skin color because this was NOT a racially motivated killing but a killing in self-defense by a man being brutally beaten by a person he suspected as being there to commit a crime.

And as the trial unfolds my supposition about why Trayvon was in that gated community (where he knew NO one) seems more and more plausible for the star witness for Trayvon was told over this past year NOT to mention the case to anyone...yet she has been all over twitter showing a side of herself that as Treyvon's girlfriend speaks volumes about Trayvon himself for one doesn't 'hang' with people like this without being like this themselves...and again the color of the people's skin involved plays NO part in this.

The bottom line in all this is that if the parties involved were reversed...if George Zimmerman had been killed by Trayvon Martin...we would NOT be hearing a word for in Florida shooting someone in self-defense is justifiable, and the media would NOT have turned a black on white crime into a three ring circus. But that was NOT the case here as the color of the victim's skin alone fueled a non-case forward by the very hate-mongers out to divide this country, and that is a disgrace NOT only to this country but a disgrace to the legacy of the Reverend Dr. Martin Luther King, Jr.