A Manifesto for Free Markets in Health Care

Not counting humor-oriented pieces such as this and this, it’s been nearly a month since I’ve written about Obamacare.

To make up for this oversight, today we’re going to look at a way out of the Obamacare mess.

But the goal isn’t simply to repeal the President’s bad policy. That merely gets us back to where we were in 2009. We need to figure out how to restore market forces to healthcare, and that means undoing decades of misguided government intervention.

Fortunately, we have a roadmap thanks to John Cochrane, a Cato adjunct scholar and Professor at the University of Chicago. Writing in the Wall Street Journal, he explains how radical deregulation is the right approach.

He starts with an essential point that “settled law” doesn’t mean unchangeable law.


…proponents call it “settled law,” but as Prohibition taught us, not even a constitutional amendment is settled law—if it is dysfunctional enough, and if Americans can see a clear alternative.

And he points out that Obamacare will get worse over time.


This fall’s website fiasco and policy cancellations are only the beginning. Next spring the individual mandate is likely to unravel when we see how sick the people are who signed up on exchanges, and if our government really is going to penalize voters for not buying health insurance. The employer mandate and “accountable care organizations” will take their turns in the news. There will be scandals. There will be fraud. This will go on for years.

But the law won’t collapse on its own. Indeed, its failures will be used as excuses for even more government.


Yet opponents should not sit back and revel in dysfunction. …Without a clear alternative, we will simply patch more, subsidize more, and ignore frauds and scandals, as we do in Medicare and other programs.

So what should be done?

Instead, it’s one of the most heavily government-controlled sectors of our economy.


The U.S. health-care market is dysfunctional. Obscure prices and $500 Band-Aids are legendary. The reason is simple: Health care and health insurance are strongly protected from competition. There are explicit barriers to entry, for example the laws in many states that require a “certificate of need” before one can build a new hospital. Regulatory compliance costs, approvals, nonprofit status, restrictions on foreign doctors and nurses, limits on medical residencies, and many more barriers keep prices up and competitors out. Hospitals whose main clients are uncompetitive insurers and the government cannot innovate and provide efficient cash service.

He then explains how a market could operate – if it was allowed.


A much freer market in health care and health insurance can work, can deliver high quality, technically innovative care at much lower cost, and solve the pathologies of the pre-existing system. …We’ll know we are there when prices are on hospital websites, cash customers get discounts, and new hospitals and insurers swamp your inbox with attractive offers and great service. …Only deregulation can unleash competition. And only disruptive competition, where new businesses drive out old ones, will bring efficiency, lower costs and innovation.

If this sounds familiar, it may be that you watched this video from Reason TV on market-based hospitalization. And if you haven’t, you should!

Cochrane writes that deregulation will enable the “creative destruction” that brings progress in other parts of the economy.


We need to permit the Southwest Airlines, Wal-Mart, Amazon.com and Apples of the world to bring to health care the same dramatic improvements in price, quality, variety, technology and efficiency that they brought to air travel, retail and electronics. …Health insurance should be individual, portable across jobs, states and providers; lifelong and guaranteed-renewable, meaning you have the right to continue with no unexpected increase in premiums if you get sick. Insurance should protect wealth against large, unforeseen, necessary expenses, rather than be a wildly inefficient payment plan for routine expenses. People want to buy this insurance, and companies want to sell it. It would be far cheaper, and would solve the pre-existing conditions problem. We do not have such health insurance only because it was regulated out of existence.

Needless to say, Obamacare is the opposite a free market. It assumes that you solve government-created problems by adding additional layers of government.


The Affordable Care Act bets…that more regulation, price controls, effectiveness panels, and “accountable care” organizations will force efficiency, innovation, quality and service from the top down. Has this ever worked?

Cochrane has the right diagnosis and right cure, but that’s the easy part. The real challenge is implementing the policies that would restore a functioning market.

That requires reforms to Medicare and Medicaid, not only to save money for taxpayers, but also because those are some of the steps that are needed if we want market forces to bring down the cost of healthcare.

Health care liberalization also means a flat tax, not only for the pro-growth impact of lower tax rates, but also because it gets rid of the internal revenue code’s healthcare exclusion, thus ending the distortion that encourages over-insurance.

It means state-by-state battles to get rid of regulations, mandates, and other forms of intervention that hinder competition and markets.

They say that even long journeys begin with a single step. That’s true, but it’s also important to walk in the right direction.

That hasn’t happened in recent decades, so it’s time to scrub the slate clean. We need free markets, not more government. We need more consumer sovereignty, not more third-party payer.

Since I’m a sucker for good political humor, we’re going to close with a great Michael Ramirez cartoon. As you can see, there’s a reason why he won my political cartoonist contest. Indeed, if I ever do another contest, this could replace his award-winning “Julia” cartoon. 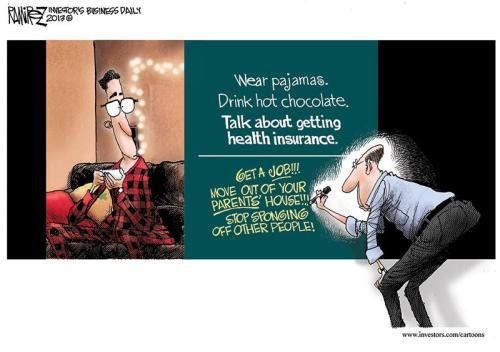 Maybe somebody should fix him up with Julia. I’m guessing they wouldn’t even know how to reproduce without intervention, handouts, and subsidies, so that would be an additional way of improving the gene pool.

And it would offset the reproductive advantage of the bureaucracy.
Posted by Diane Sori at 9:28 AM