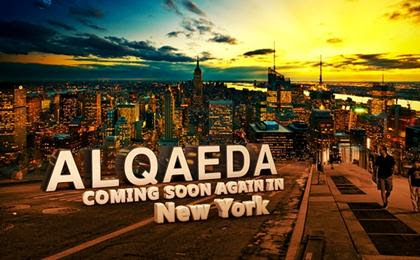 The Daily News reports that the NYPD Intelligence Division's cyber unit is investigating the origin and significance of the graphic, which appeared Monday on an Arabic-language al-Qaeda forum.

The graphic shows the Manhattan skyline at sunset with "Al Qaeda" in bold type followed by "Coming Soon Again in New York."

Al-Qaeda has been blamed in the Sept. 11, 2001, terrorist attacks, which destroyed the World Trade Center and killed thousands of people.

FBI spokesman J. Peter Donald says the agency takes all threats seriously and "there is no specific or credible threat to New York."
Posted by Diane Sori at 12:29 PM