Why The Long Wars?

By Michael J. Nellett / The Western Center for Journalism
inShare4 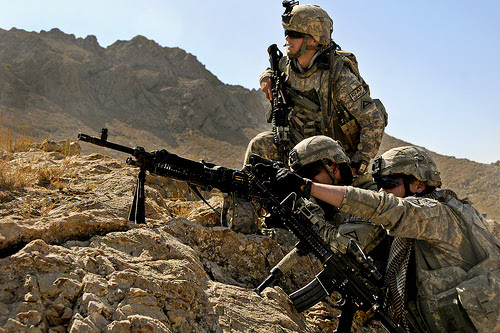 Yesterday was Armed Forces Day. A celebration of our military and those who have served in all branches.

As I was watching cable news covering this day, something struck me as odd. Why have the last three wars (Viet Nam, Iraq, and Afghanistan all been ten year wars? On December 7, 1941 the Japanese attacked Pearl Harbor, heavily damaged our Pacific Fleet and ran through the Central Pacific basically unchecked for the next year. Despite that, America was able, in the short span of less than four years, to take back North Africa, The Mediterranean, Western Europe, and then take the war right to Japan, itself. In August of 1945 Japan, the last belligerent of World War 2 unconditionally surrendered. We had used EVERY weapon at our disposal to end that terrible conflict ASAP. The difference between then and now? FDR let the military professionals run the war after he explained the ultimate goal.

Viet Nam was a fiasco because Lyndon Johnson wanted to be a warrior president and meddled in what should have been a short war. He did have the military mindset nor the understanding of either strategic or tactical goals. He ran the war like some kind of a game with too many restrictions, ” rules of war” that proved to be ridiculous, and relied on a corrupt government to supposedly, “watch our back”. We finally did break the back of the Viet Cong but after it was much too late and the public was turned firmly against the war. The weapons that we had at our disposal should have made quick work of North Viet Nam had we only been allowed to use them . Johnson never understood that war is not a game nor a political pawn therefore he left office disgraced.

Iraq was a joke from day one. There never was a use of the full force of the United States military, nor a concrete idea of what we realistically were going to do there. Again, political meddling set up rules for our military that were ridiculous. Maybe if we had tagged all the Iraqis with “good guy” “bad guys” it would have been easier for our soldiers to figure out who was who? We let Iran supply the insurgents with weapons to kill our guys and yet never touched them.

Afghanistan is the third decade old conflict that shouldn’t have been. Again, if the country we target is a legitimate enemy then let’s turn the full force and fury of our military heroes loose to get the job done as quickly and with as little lose to our people as possible. We don’t need to win “hearts and minds” as we are there to kill those trying to kill us. How do you realistically separate the “civilians” from the insurgents when they all look and dress alike? Iran should be turned into a giant sandbox. No “democracy, no rebuilding, no quarter given. Oh yeah I have forgotten how well they have treated Americans. Daniel Pearl and the other innocents who were beheaded for the morons entertainment. We have already this year 21 incidents of Afghans dressed as soldiers turning their guns on our guys without warning. Some allies huh. We support a mentally challenged ,corrupt ,unappreciative little man who isn’t even liked by his own people! When are we going to learn?

This is my point, if the United States is going to punish a country for screwing with us then turn on the military faucet and destroy the enemy totally and quickly. If you think that is too harsh, so is burying one of our heroes that politicians to play war. We are the most technically advanced military on the planet. Our military is the most well trained and best equipped force in the world, so why are we bogged down in these stupid, no win, no end game conflicts?

I am a hawk when it comes to military action, but I am also an advocate of using overwhelming force. War is NOT a game. The only rules that exist in war are kill or be killed and win. If the President simply wants to play warrior then let him get a board game like Battleship. If we are going to justifiably defend our national security, our territory, or to defend an ally, then let’s unleash the hounds of hell and break the enemy quickly. If we are going to send our ground forces into a country where the existing government is weak kneed you can’t tell the difference between the population and the bad guys then let’s keep our guys out and turn the battle over to our special forces and the drones. No more needless casualties for people and countries that disdain or disrespect us. Our blood and treasure is worth far more than most of these “troubled” countries are worth so let’s start using what we have to the utmost and make our intervention very short and very harsh.
Posted by Diane Sori at 4:39 PM