Op-ed:
Our military's vote must count
By: Diane Sori 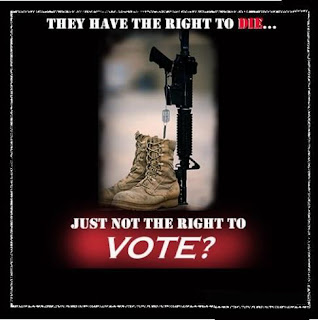 And as Obama and his people continue to squawk about voting inequality, this week Mitt Romney rightly accused Obama's re-election committee of suing to restrict military voting rights in Ohio.  When Mitt Romney called the lawsuit "an outrage" and said, "The brave men and women of our military make tremendous sacrifices to protect and defend our freedoms, and we should do everything we can to protect their fundamental right to vote” Obama’s people still defended their course of action saying what makes them so special as to warrant an extension in voting time and that Romney is trying to distort the facts with his statement.

At the heart of this is a July lawsuit initiated by the Obama for America Campaign, the Democratic National Committee, and the Ohio Democratic Party seeking to revoke the additional time allowed for in-person early voting for service members in the battleground state of Ohio.  But the fact is that this lawsuit intends to disenfranchise military voters, and, in my opinion, the judge in good conscience should reject the suit with prejudice.

Ohio has allowed early voting up until the day before the election for the general population, but has recently stopped the voting on the Friday before.  An exception was made though for military members and their families so they can have an extra three days to cast their votes because of the nature of what they do and the time frame they must do it in.

But Obama and his minions have a problem with that because they feel, and make no effort to hide those feelings, that why should the brave men and women who put their lives on the line to defend our country deserve special treatment.

Hey Obama, if anyone deserves special treatment it is these very people who defend our country NOT your ILLEGALS, anchor babies, and bought and paid for voters.

And all this disrespect for our service people comes from a man who never served in the military; a man who everyone knows is NO big fan of our men and women in uniform (except when he can use them for his photo ops); and a man who constantly apologizes for our military’s actions as he sides with our enemies.  His defamatory and dishonoring public words and his policies toward our veterans prove just that.  In fact, it has reached such a crescendo that Florida Congressman Allen West, a retired Army Lieutenant Colonel, patriot and war hero, who served in the Iraqi theater, has stated on the record that Barack Hussein Obama is “undeserving of the title Commander-in-Chief.”

And I so agree.

Obama in his arrogant, self-serving, ‘it’s all about me’ posturing knows he will NOT get the military vote and he is trying to do everything in his power to stop them from voting.  He is smart enough to know that if the election is close the fact is that the military vote could very well determine the presidency, and he knows damn well that the military outwardly supports and favors Mitt Romney.

Obama has shot himself in the foot BIG time with this one and this insult will NOT go away no matter how hard his spin miesters try to twist the intent for the bottom line remains that Barack Hussein Obama is trying to prevent our military from voting.  Thankfully, 15 military groups, including AMVETS, the National Guard Association of the United States, the Association of the U.S. Army, have brought attention to this outrage and have asked that the suit be dismissed.

No matter the outcome of this lawsuit, Barack Hussein Obama will be the loser not only in the eyes of the military and their families but also with ‘We the People’ who stand unequivocally united behind those who actually have more right to vote than the rest of us, for if not for them and the sacrifices they make, we might not have the right to vote.