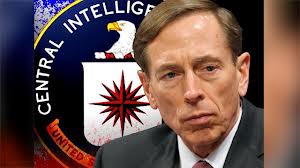 Sex...it took a sex scandal to bring Benghazi to the forefront...sex...NOT the fact that four Americans were MURDERED or that our president is trying to cover-up NOT only the incident but his involvement in it...sex...just a plain old sex scandal.

But you know what...sex sells and if its sex that forces the msm to report about Benghazi then so be it.

The Benghazi scandal now grows deeper and more complex as David Petraeus, head of the CIA for the past fourteen months and one of America’s most decorated four-star generals, resigned on Friday after an unrelated FBI investigation into news leaks uncovered evidence that he was having an extramarital affair.

And with the CIA currently deflecting questions about their involvement, or I should say lack of involvement, in the Benghazi attack that led to the death of U.S. Ambassador Chris Stevens, Information Officer Sean Smith, and ex-SEALS Tyrone Woods and Glen Doherty, who does Petraus think he's fooling that his sudden resignation is about an extra-marital affair.  Generals, and those in power, have always had affairs, nothing news worthy about that except for the tabloids.

So let’s all get this straight...the head of the CIA resigns before any accusations are made, before anyone even asks for his resignation, and oh so conveniently right after the election that got the traitor Barack HUSSEIN Obama safely ensconced for a second term.  If you believe Petraeus resigned because he had an affair then I’ve got some swamp land to sell you.

Did he have an affair...who cares as that’s a personal matter between him and his wife.  I care about what he knew and when he knew it.  I care about his covering for the most corrupt president in US history.  I care about four American lives lost being relegated to ‘bumps in the road.'

Simply and without question Patraeus’s resignation is all about Benghazi.  ’We the People’ can see through his subterfuge without batting an eye.

Benghazi...what I believe to be Obama's front for running guns to the Muslim Brotherhood and maybe even to al-Qaeda.   Benghazi...Ambassador Stevens probably found out the truth about the gunrunning and was MURDERED to keep him silent.

And Petraeus knew all this and had to be silenced BEFORE the Benghazi hearings got under way.  It’s NO coincidence that Petraeus is resigning at this point in time for the affair of a now fallen hero is a great diversion to cover-up the REAL story of MURDER and gunrunning.

And even with facts showing that an urgent call for help was sent by the embassy and by the CIA annex, both right before and during the attack, those requests were denied by the CIA chain of command...the same command that also told the CIA operators twice to ‘stand down’ rather than help the ambassador or his people.  But here’s the question...if it wasn’t Petraeus who ordered that NO help be given, then that order would have had to come from someone who outranked even the director of the agency.

And that person is Barack HUSSEIN Obama.

This is why Petraeus was silenced...silenced so he could NOT implicate Obama...silenced so the truth would NOT come out that Ambassador Stevens was MURDERED because he stumbled upon the truth about the traitor who just was re-elected (I should say the traitor who stole the election) to the presidency of the United States of America.

And while sex sells the truth does come out eventually for anyone with even one working brain cell knows that it’s NO coincidence that Petraeus' resigning on Thursday, the very day that the Foreign Affairs Committee was planning to call him to testify at the Benghazi hearings, stinks.  And the convenience of the timing for Obama, meaning that this was done AFTER the election, cannot be overlooked either.

So barring a subpoena, CIA Director David Petraeus, the primary witness to who ordered the CIA to stand down in Benghazi, has now been silenced.

And while the talking heads on the news keep saying what a great man David Petraeus is...NO he is NOT...for he has now proven himself complicit in Benghazi by his actions.   Will he have the guts to prove himself otherwise...only time will tell.

I, for one, hope that now as a private citizen Patraeus sings like the proverbial canary, and nails this miserable excuse for a president’s ass to the wall...to the wall for MURDER and for aiding and abetting the enemy...grounds for charges of TREASON to be brought against Barack HUSSEIN Obama for sure.
Posted by Diane Sori at 12:50 AM