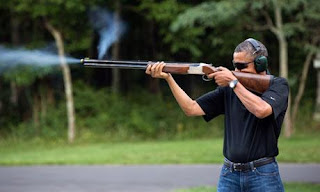 On Saturday, the White House released a photo of Barack HUSSEIN “Yes, in fact, up at Camp David, we do skeet shooting all the time” Obama, supposedly shooting skeet on August 4th, his birthday, at Camp David. And why release it now in the middle of the battle over his wanted gun control firestorm...it was done strictly to sway public opinion in an attempt to try and show that he understands the concerns of gun owners.

As if skeet shooting is what concerns we gun owners.

Obama must really think all gun owners are stupid to believe that his 'supposed' (and I say 'supposed' for a reason) shooting of some clay pigeons would appease our concerns about his wanted 'for the sake of the children' measures to curtail our Second Amendment right to keep and bear arms. If he really cared about America's children he would use his power as president to enforce the over 20,000 existing gun laws already on the books, stop revolving door prisons, and have our healthcare system stop giving sociopaths and crazies a little pill, pat them on the head, and then release them back into society...guess what...that just won't cut it anymore.

As Chris Cox, the chief lobbyist for the NRA stated after the photo was released, “He (Obama) clearly doesn’t get it. But in his effort to pursue a political agenda, he apparently is willing to convince gun owners that he’s one of us, that he’s a Second Amendment supporter. Skeet shooting, whether you’ve done it or not, doesn’t make you a defender of the Second Amendment.”

How right he is and NO way will some doctored photo-shopped photo pull the wool over our eyes.

That leads me to the 'supposed' photo in question. There are two main proving points that this photo is NOT for real...the smoke and the lack of recoil.

And really, there are some things that are just obviously wrong with this photo that even a novice could see before getting down to the realities of the smoke and lack of recoil...like why is his head pointing downward (as in below the sight-line) when to shoot skeet you look up and fire at the top of the arc, as in the barrel is pointed to the sky NOT at the horizon level...why is the shotgun stock placed with a gap between his shoulder and the top of the butt as it's now against bone and the recoil would give him one hell of a nasty bruise...why is he aiming straight on when he's trying to hit a moving target, he should be twisting with the target right or left and up or down...why is he NOT wearing, as most skeet shooters do, either a shell bag, a vest or both, and where is his baseball style cap with a bill to keep the glare of the sun out of his eyes as he's tracking the target...why is the light on the top of his right arm different than in the rest of the photo (the light on the top of his left arm is from a studio light, see the photo above)...why is the 'color temperature' (a measure of a light's color used to keep colors in photos looking accurate and natural) different from the background...why, because he was photographed in a studio, cut and pasted on the background with the smoke airbrushed in...as in total 'green screen' job.

But the crux of this fraud is the secondary smoke coming from just behind the sights and the fact that there's NO visible recoil movement. This is all the proof that's needed to prove this photo is a phony all the way.

First, the smoke...the simple truth is that we live in an era of smokeless powder and the discharge from Obama’s shotgun has way too much smoke coming out of it. Modern shot-shells simply do NOT produce that much smoke, though they do produce some but that varies with the load. Some will try to counter this by saying that this might be because of a 'special' powder load but why would anyone use a powder load that produces so much smoke...they wouldn't, especially someone who obviously has never fired a shotgun before.

Also, the smoke plume from the ports is a giveaway as it’s physically impossible to have a large smoke plume from only one side, with nothing ejected from the other set of ports. If the photo was real there would be equal smoke plumes from both sets of ports, because a ported shotgun barrel is simply a hollow tube with two sets of holes drilled in it, one on each side of the vertical center-line, equally distant from the end. As the wad passes them some of the powder gas escapes through the holes. There is nothing to direct the gas to one set of holes and not the other, so the gas must escape from both sets of holes equally.

Second, as for the recoil, remember defensive loads are not light loads. Target loads, such as are used in skeet, are light loads. The entire shotgun moves in recoil, NO matter if the load is light or heavy. Ported shotguns, especially with the light target loads and open chokes used in skeet, move straight back into the shoulder with little or no muzzle rise (that’s the purpose of the porting). The recoil impulse continues after the load exits the barrel because of inertia. The picture of Obama shows smoke jetting from the muzzle and ports, which means the shot is at about the center point of the recoil cycle. It should show his body recoiling, especially with him being as slight (puny actually) as he is.

So there you have it...proof positive, I hope, as to why this photo is NOTHING but a phony all the way. Barack HUSSEIN Obama (our 'poser-in-chief') and his minions might try to fool we gun owners but he forgets we're smarter than him...much much smarter than him. We know why this photo was made and we know how he intends to use it. And isn't it a hoot that the White House has issued a warning NOT to photo-shop the picture to have fun with it (people are doing it anyway) when the entire of Obama's life is NOTHING but one BIG lie complete with photo-shopped pictures to 'prove' that lie.

Just a thought...anyway, happy skeet shooting Barack HUSSEIN “we do skeet shooting all the time” Obama...you BIG phony.
Posted by Diane Sori at 12:01 AM