One Suspect in Boston Marathon Bombings Dead; Second At Large 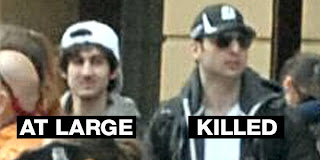 The massive manhunt for the “armed-and-dangerous’’19-year-old suspect in the Boston Marathon bombings continued into mid-Friday afternoon, with police fearing the teen they seek is fitted with an “explosive vest’’ that could be detonated to kill himself and anybody who tries to approach him.

Hundreds of police officers and SWAT team sharpshooters were conducting a painstaking door-to-door search for Dzhokhar A. Tsarnaev, a Chechen native who became a naturalized U.S. citizen last September.

The extraordinary hunt — which shut down Boston — followed a bloody night of explosions and gunfire in the streets, during which the second suspect — Tsarnaev’s older brother Tamerlan Tsarnaev, 26 — was killed in a wild shootout with police.

So desperate was Dzhokhar to flee authorities that he floored his escape vehicle, running over his dying brother, police said.

The brothers were identified on Thursday as the only suspects in the Monday’s devastating marathon explosions which killed three people and injured 176 others, many of them maimed for life with missing arms, legs and eyes.

Boston Police tweeted shortly after 1 p.m. that “60 percent of the search is done’’ and said it will continue until Tsarnaev is apprehended. All bus and train services in and out of Boston, including Amtrak, Bolt Bus and Megabus, were shut down in an apparent bid to close off possible escape routes.

Police warned residents of Boston and its surrounding suburbs to remain inside their homes with the doors locked.

"We believe this to be a man who has come here to kill people. We need to get him in custody," said Boston Police Commissioner Ed Davis of the suspect still at large.

"We are ashamed," he told reporters outside his home in Maryland. “Somebody radicalized them, but it wasn’t my brother.’’

But the aunt suspects’ aunt Maret Tsarnaeva, who said she was responsible for helping them move to the U.S., insisted they were innocent.

My nephews cannot be part of this terrible, horrible act that was committed in the streets of Boston,’’ she told CBC News.

“I know these two nephews, smart boys, good boys, they have no motive for that, they have no ideas to be going to this kind of act. It’s just not the case, it cannot be true.

Secretary of State John Kerry praised the fast response of law enforcement and called the manhunt "a pretty direct confrontation with evil."

"In the past few days we have seen the best and we've seen the worst of human behavior, and it's the best that all of us really want to focus on," he said.

Senate Intelligence Committee chairwoman Dianne Feinstein told NBC News the marathon bombing was "a terrorist attack." She added: “It's also clear, you know, that you know you don't have to be a card-carrying member of any terrorist group to commit a terrorist attack.’’

Along with public transportation being suspended, air space was shut to commercial jets as sophisticated surveillance helicopters took over to search for clues. All classes and student activities at Harvard University and M.I.T., and public and private schools were closed.

The fast moving events began Thursday as FBI officials identified the two brothers as suspects in the devastating blasts caused by pressure cookers that were fashioned into homemade bombs and left in backpacks near the marathon’s finish line — the worst attack on U.S. soil since 9/11.

About five hours after the FBI released surveillance photos showing the two brothers walking near the scene of the explosions, a M.I.T. university police officer was shot and killed on the university’s campus.

Minutes later, the two men staged a carjacking, holding their victim inside the vehicle for a half an hour before releasing him unharmed. They bragged to the car owner that they were the marathon bombers, according to police.

Cops chased the brothers’ vehicle to suburban Watertown, with the pair brazenly hurling live explosives at police from their moving car. The pursuing officers and the suspects also exchanged fire.

"During the gun fight, the older brother was struck multiple times. He was taken to Beth Israel Deaconess Medical Center and pronounced dead of multiple internal injuries from numerous gunshots and injuries possibly caused by an explosive device strapped to his body.

The slain M.I.T. officer, Sean Collier, was described by his roommate as an “awesome’’ and brave man.

“He was the guy who went to help,” the roommate said. “The best guy got shot down by the biggest scumbags.”

A government official told The New York Times that Dzhokhar came to the U.S. in 2002 with his father and mother on a regular visa and applied for refugee status. His older brother Tamerlan came about a year later. Dzhokhar became a naturalized U.S. citizen last September.

The brothers have two sisters, one of whom lives with her husband in West New York, N.J. FBI agents had sealed off the sister’s home Friday afternoon and were said to be questioning her to see if she has had any recent contact with her surviving brother.

Authorities are attempting to determine if the attacks may be linked to the ongoing call for Chechen independence.

A Russian language website site with Dzhokhar Tsarneav's name hailed Islamic websites and freedom fighters calling for the liberation of Chechen. The author said he was a 2011 graduate of Cambridge Rindge and Latin School and attended elementary school in Makhachkala, the capital of Dagestan, a Russian province bordering Chechnya.

The website also contained links to videos of fighters in the Syrian civil war and Islamic web pages. One was titled "There is no God by Allah, let that ring out in our hearts."

Police in Cambridge carried out a “controlled explosion’’ of several explosive devices that belonged to the two suspects.