Politics does indeed permeate our judicial system through the two should NEVER mix, and that was proven with George Zimmerman being rightly found NOT guilty Saturday night in a unanimous decision...much to the chagrin of race-baiters Barack HUSSEIN Obama, Jesse Jackson, Al Sharpton, and their ilk who used Zimmerman as a pawn in their attempt to open healing racial wounds to serve their own political agendas.

Starting with overcharging George Zimmerman with second-degree murder, this case has now ignited a national debate over self-defense laws and race relations as six jurors reached a verdict that proved that sometimes a tragedy NO matter how sad it might be for a family is just NOT a crime... especially when the victim is portrayed to be something he is NOT.

George Zimmerman never denied shooting Trayvon Martin, but he said he did so in self defense. And while nobody is happy that a young man is dead, the bottom line is that Trayvon Martin was a 17-year old thug NO matter how many times the prosecution called him a 'sweet child'. Coming to light after the verdict was reached was that the prosecution knew that Trayvon had jewelery and such in his possession that clearly did NOT belong to him, yet they hid this fact from the defense until it was too late to use as the biased judge had already ruled that Trayvon's 'character' would NOT be allowed to be brought into evidence.

Nor would the truth about the Skittles and iced tea be allowed into evidence, a combination when mixed with cough syrup becomes a street drug and a cheap high (known as Purple Drank or Lean) even while knowing that both were found unopened by the police at the scene...nor were Trayvon's cell phone pics of his homegrown marijuana plants, the pics of him blowing joint smoke, the pic of his hand holding a gun, or the pics of him with his middle fingers in the air with a look on his face that was chilling...nor were his text messages with obvious racial overtones and bravado about his fighting abilities...nor was his past incident about punching a bus driver in a fit of rage.

NO...none of this would be allowed into evidence by a judge so obviously biased towards the prosecution, with an attitude so arrogant that her very demeanor was an insult to everyone in that courtroom. Judge Debra Nelson herself needs to be reprimanded a least, disbarred at best, as she ruled time and again NOT to allow defense evidence into testimony.

And in a last minute grandstand play, Judge Nelson told the jurors that in addition to the second-degree murder charge, they could also find George Zimmerman guilty of the lesser charge of manslaughter (a charge where the prosecutors only had to convince the jury that Zimmerman killed without lawful justification), but NEVER telling them that a manslaughter conviction could have George Zimmerman facing up to 30 years in prison. And earlier Saturday, showing how shocked even they were at the inclusion of this new charge, the jury sent a note to the judge requesting clarification of instructions related to manslaughter, giving credence to how seriously they were reviewing the case, and how seriously they were looking at the possibility of what many considered a compromise verdict.

Before deliberations began the jury was instructed by Judge Nelson that “Zimmerman cannot be guilty of manslaughter by committing a merely negligent act or if the killing was either justifiable or excusable homicide.” But probably a critical turning point in the jury deliberations was when Nelson refused to answer their direct question on what really was the level required for the crime of manslaughter, as her refusal allowed Nelson's constant indigent attitude to finally come to a head, and this refusal could have been a light bulb moment for the jury who might now have realized that George Zimmerman was being railroaded.

The NOT guilty verdict means the jury found that Zimmerman justifiably used deadly force, as per Florida's 'Stand Your Ground' law. They came to the conclusion that he reasonably believed that such force was "necessary to prevent imminent death or great bodily harm" to himself, which is Florida's definition of self-defense.

The charges broke down as followed: for second-degree murder the jurors would have had to believe that Martin's unlawful killing was "done from ill will, hatred, spite or an evil intent" and would be "of such a nature that the act itself indicates an indifference to human life."

To convict Zimmerman of manslaughter, the jurors would have had to believe he "intentionally committed an act or acts that caused the death of Trayvon Martin."

Thankfully, after deliberating for 16 hours, the jury came back with a verdict of NOT guilty on all charges...and that should have ended this sad case...a case that should NEVER have been brought in the first place, a case hyped by the media and instigated by Barack HUSSEIN 'If I had a son he'd look like Trayvon' Obama, Jesse Jackson, Al Sharpton and their racist ilk. But instead this is what happens...even after head prosecutor Bernie De la Rionda said, "I am disappointed in the verdict but I respect it. We accept the jury's verdict"...Roslyn M. Brock, Chairman of the NAACP said that just because Zimmerman had been cleared on all charges doesn't mean that this case is over. So on Saturday night a petition was posted to the Department of Justice, asking AG Eric Holder to file civil rights charges against Zimmerman, saying there is no more fundamental civil right than the right to live.

But this case as presented by both the prosecution and the defense was NEVER a case about race or civil rights but a case about a killing done in self-defense, so the NAACP is way off base on this one. And also important to note is that soon after the killing took place the FBI did their own investigation and found NO racial bias in reference to this event.

And so while both sides did ask for peace even before the verdict was read, people like Jesse Jackson were fueling the flames of racial discontentment. On FOX News' Judge Jeanine show on Saturday night, this miserable excuse of a man said the only verdict he would accept would be second-degree murder or manslaughter, and that he would NOT be happy with anything else. First, who gives a damn what Jesse Jackson would accept, and second, his words sounded very much like a threat of violence if the verdict didn't go how he and his ilk wanted it to go.

And adding even more discontentment, big mouth, race-baiter Al Sharpton issued a statement saying, "The acquittal of George Zimmerman is a slap in the face to the American people".

NO...I don't think so as the acquittal of George Zimmerman shows that our system of justice still works in spite of the liberal left and the racial bigots trying to hijack it.

As expected after the NOT Guilty verdict came down the internet came alive with all sorts of rage against Zimmerman (and small scale rioting did break out in some cities), so much so that now George Zimmerman will have to live his life in fear of a fringe element who have said, at least in tweets and on the internet, that they 'demand' revenge for Trayvon.

One person wrote on twitter, "What kind of world do we live in where an innocent is killed, and the killer is found innocent?...America has given a free pass to murder black youth." And while many blacks believed this case was about generations of young black men being targeted, stalked, and brutalized by police, security guards, neighborhood watches and the courts NOTHING could be further from the truth as most so-called 'black innocents' are killed as a result of black-on-black crime NOT by the perceived notion that whites are after young black men.

And this is something Obama and his ilk don't want anyone to know for they'd rather condemn and accuse non-blacks, even without evidence, while they ignore the murder of their own by people by their own people. For them, feeding into the perception is more important than facts, but the fact is that 93% of blacks killed in America are killed by blacks, And the truth is that while blacks make up only 12.5% of the US population they commit nearly 40% of murders in America every year, with nearly 50% of those murder victims being black. Yet remember that blacks make up only 12.5% of the total population culminating in the sad reality that blacks kill more members of their own race every year than do all other races in America combined. 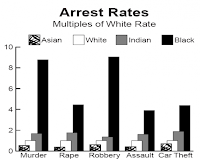 And with NO outrage within the black community about this most truthful of all sad realities, the perception of 'the white man' doing injustice to 'the black man' will continue...egged on by the likes of Barack HUSSEIN Obama, Jesse Jackson, Al Sharpton, and their ilk, because racial divide serves their purposes of bringing America to her knees oh so well.

And through George Zimmerman...a now officially adjudicated innocent man...all their racism, bigotry, and hate will funnel as they work towards their goal of starting a race war here in America.