While most are focused on Syria let's NOT forget about ObamaCare…the lurking shadow hanging over us all…ObamaCare…the ‘gift’ that keeps on giving…a gift I and millions of others would be more than happy to return.

Thankfully, legal and political opposition from Republicans and their allies have thrown a bit of a wrench into ObamaCare’s original intent. And with only about half the states opting to expand the Medicaid program that services poor uninsured families living below the poverty level in their respective states, Republicans in Congress have already denied nearly $1 billion in new asked for funding this year alone.

And now the actual implementation of this monstrosity of a health care law that was supposed to have started on October 1st…with the signing of the final agreements with insurance plans to be sold on federal health insurance exchanges starting…has been delayed.

Now if only Congress would defund the whole damn thing and save us all a lot of headaches for ObamaCare’s negatives greatly outweigh its one and only positive…the pre-existent condition clause.

Among its oh so many negatives, ObamaCare in NO uncertain terms is the biggest jobs killer in the country today as it destroys the foundation of the 40 hour work week. Now major companies and small businesses are cutting back on hiring or laying off employees for the simple reason that they cannot afford to pay for their health insurance under the guidelines laid out in ObamaCare.

And even with the one-year delay in implementing the provision that would have required employers with at least 50 full-time workers to provide health insurance or pay a penalty, those employers that can afford NOT having to lay off employees outright are instead cutting back many employees work week to 39 hours or less so they do NOT have to provide health coverage for those employees… employees who now become part-timers instead of full timers.

In simple words…under ObamaCare premiums are higher…much higher…forcing many employers to consider dropping health coverage completely thus leaving employees to go it alone in finding their own health insurance.

And Obamacare in driving up costs will also wear down medical quality as it blatantly attacks doctors for daring to resist government attempts to tell them how to practice medicine…for it portrays them as ‘enemies of the people’…rendering those who have dedicated their lives to helping the sick and injured impotent to treat patients as they were trained to do for now they must cow-tow to medical decisions made by bureaucrats and pencil pushers sitting in ivory towers whose medical training might go as far as knowing how to put a band-aid on their kids boo-boos.

And just the fact that ObamaCare exists in the first place clearly places blame on doctors for the rise in health care costs by those in Obama’s orbit who allude to them as ‘profiteers’…’profiteers’ who now will be called to task by being forced to answer to and take orders from those who have probably NEVER set foot in a hospital, and who would probably pass out at the sight of blood.

And if truth be known our medical care is indeed determined by our party affiliation. Just think about it…the truly poor are forced by their lack of money to rely on the government for their medical needs…the ‘sponges’ of society rely on the government for their freebies and handouts which include ripping off the Medicaid system…the ILLEGALS can walk into any emergency room and NOT be turned away…and what they all have in common is that almost 100% of them are Democrats who wouldn’t dare bite the hand that feeds them…or in this case gives them free or almost free medical care.

Now for the most part Republicans do NOT fall into those categories and shoulder the burden of having to pay the medical costs of those who do. The government will bend over backwards to make sure the medical needs of the poor, the ‘sponges’ and the ILLEGALS are met, while making those who can afford insurance jump through hoops to get the treatment they need.

And let’s NOT forget that Sarah was right…we do have death panels. Just look at the recent case of the little 10-year old girl who needed a lung transplant in order to survive. Time and time again she was denied a position on the transplant list simply because she was a child under a certain age…a decision based on random bureaucratically decided upon numbers instead of being based on medical necessity. If NOT for her parents taking her story national that child would be dead…and if that isn’t an example of a death panel decision I don’t know what is. 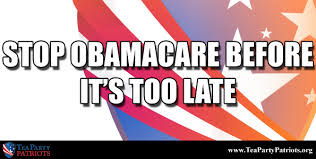 And if ObamaCare is NOT defunded…is NOT killed outright…it will only get worse and our medical system risks a complete collapse as the practice of medicine will become NOT the art of healing, but will become a game with Washington bureaucrats deciding who deserves treatment and who does NOT, and it will be ‘We the People’ who will keep paying with our money and our lives.