Op-ed:
The 'People's Pope' tries to appease the unappeasable
By: Diane Sori

“I am with you.”
- Pope Francis' words to Palestinian children while in Bethlehem

Let me start by saying that some articles are harder to write than others and this is one of them for NEVER in my wildest dreams did I ever think I'd say anything against the Pope of the Holy Roman Catholic Church for NOT only do I respect the man but I respect and honor the position he holds. But when the Pope appears to side against Israel I cannot remain silent.

Just a few days ago, Pope Francis publicly said words he should NEVER have said as he, the titular head of the Roman Catholic Church and speaking on their behalf, expressed sympathy and solidarity with the Palestinians, and gave his and the Church's support to the so-called (non-existent) Palestinians. And he did this during his first pilgrimage to the Holy Land as Pope.

Repeatedly saying he backed the Palestinians statehood goal, Pope Frances, who could have prayed anywhere during his visit to the West Bank, calculatingly chose to pray at Israel’s rightfully placed and so needed separation wall...the one that keeps the barbarians from blowing up innocent people in Israel...chose to pray at a section where “Free Palestine” was scribbled on the wall...and also chose to call the recent halt in the peace talks “unacceptable.”

He even went so far as to arrange a June 6th meeting between the Israeli and Palestinian presidents...a meeting to be held at the Vatican where Mahmoud Abbas and Israeli President Shimon Peres can pray for peace together. “I offer my home in the Vatican as a place for this encounter of prayer,” Pope Frances said, but I doubt this will in the end come to fruition for the Palestinians do NOT want peace nor do they want just a sliver of Israel...they want ALL of Israel...and the Pope should well know this...or does but just does NOT care or is just too fearful of addressing the truth.

But wait, to insure this meeting take place, watch this most liberal of Popes invite Barack HUSSEIN Obama to join in the prayers...oh what a photo-op from hell that would be.

And there's more...Pope Francis, now sadly showing himself to be a liberal muslim supporting Pope, also gave a private luncheon for five Palestinian families who claim they were directly harmed by Israel's policies, but he did NOT host the same for let's say five Israeli families of those the Palestinians have killed with their almost daily rocket launches into Israel or with their much ballyhooed suicide bombings.

And all this obvious anti-Israel and shadowy anti-Jewish sentiments by this Pope has the Palestinians dancing in the streets, so to speak, as Palestinian officials applauded this most revered man's decision to refer to the “state of Palestine." But even more appalling than that...and almost on par with Barack HUSSEIN Obama's demand that Israel pull back to its pre-'67 borders...was this Pope calling Mahmoud Abbas a "man of peace," referring to him as the president of the “state of Palestine,” and referring to his Bethlehem office as the “presidential palace.”

And with those words Pope Frances knowingly or unknowingly dug the knife deep into Israel's back and did so before the cameras.

And just like after 9/11, the muslims here in America...those of so-called Palestinian descent...had to stick their two-cents in helping to flame the fire this Pope ignited.

“Coming to Bethlehem and flying to Bethlehem from Jordan shows solidarity with the Palestinian people, which is wonderful. We need that,” were the words spoken by Samar Sakkakin from Canton, Michigan NOT far from the muslim enclave of Dearborne...words once again proving there is NO such thing as a moderate muslim.

But what's even worse than the words Pope Frances spoke or the invite to pray he made is that this man had NO business butting into affairs he knows NOTHING about. Let him live under the threat of daily rocket attacks...let him wander the streets of Tel-Aviv or other areas of Israel and wonder if the next bus he takes or the next restaurant he stops at to eat will be his last...let him experience what it's like to have less than a minutes warning to get into a bomb shelter...let him live under the threat of a nuclear bomb aimed at his country with madmen at the trigger...let him have all that and then and only then can he butt into the affairs of a sovereign nation...of Israel...who lives daily with hungry wolves at her door.

And dare I say this Pope misled his followers because for weeks leading up to his visit, Pope Frances had been insisting that this three-day trip to the Holy Land was to be a “strictly religious” pilgrimage to commemorate the 50th anniversary of a previous meeting between the Catholic and Orthodox hierarchy, and to pray with Ecumenical Patriarch Bartholomew I, the head of the world's Orthodox Christians. Changing his mind at the very last minute as his advisers claim, and then doing and saying what this Pope has done and said, now removes this visit in its entirety from the religious and places it into the realm of the political. And when one is the head of the Holy Roman Catholic Church with its roughly 1.2 billion followers, the political fallout can have huge ramifications...and in this case those ramifications bode very poorly for Israel.

And smack of the 'old hatreds' resurfacing. 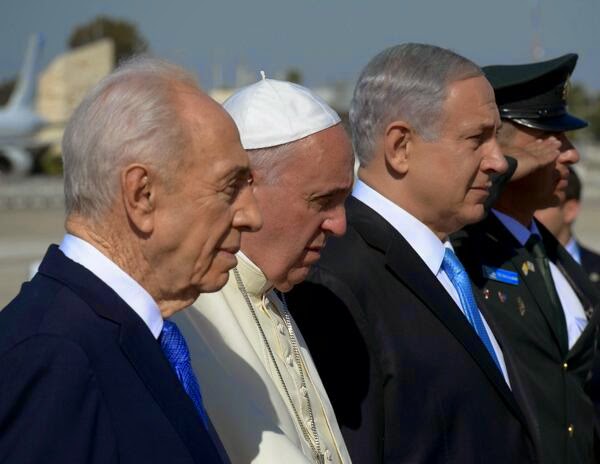 Claiming he is a friend of Israel...but with his actions and words sadly proving otherwise...Pope Frances, on the final stop of this trip, arrived in Israel where he pulled out the best of the accepted politically correct words and called for a “just and lasting solution” so that Israelis and Palestinians may live in peace. Saying Israel deserves peace and security “within internationally recognized borders,” while the Palestinians have a “right to live with dignity and with freedom of movement” in their own homeland, this Pope cannot accept the simple fact that there is NO such thing as Palestinians...they're just run-of-the-mill Arabs most with Jordanian ancestry... and that their homeland is NOT Israel but is Jordan and the other massive Arab nations that surround the tiny sliver of land that is Israel...a nation that cannot ill-afford to give up even one handful of dirt to those who wish to wipe her off the face of the Earth.

And Pope Francis for whatever reason cannot accept the fact that their own brethren do NOT want them as the so-called Palestinians are the bottom of the Arab barrel in every respect.

So while Pope Francis' intentions might be good...and as the Holy See I pray they are...and his hope for peace between the two factions heartfelt...the sad reality is that he has overstepped his bounds on this one as most Westerners know that there can NEVER be peace with those out to kill us all.
Posted by Diane Sori at 12:02 AM