Op-ed:
Why Were Veterans Issues Left Out of the Republican Debate 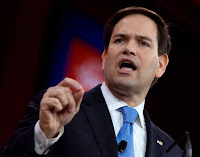 "We're going to have a VA that cares more about our veterans than about the bureaucrats who work at the VA."
- Florida Senator Marco Rubio when finally asked a question concerning our veterans

The first of the 2016 Republican Presidential Debates is now one for the history books and some history it was.

Let's see...moderator Megyn Kelly was eviscerated by the right for asking tough questions about each candidates perceived weaknesses; some candidates looked like a deer caught in the headlights while at the same time a few others shone bright; but when the dust settled what I and many others watching the debate noticed was the lack of any true discussion time given to the plight of our veterans or to the way the Obama administration treats our current troops when they return home from the theaters of war. 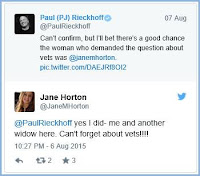 And only at the very end of the debate when a woman in the audience...Gold Star widow Jane Horton...approached Kelly at the moderator's table as she was asking her so out of place in a political discussion 'God question'...as a belief in God as a requirement to run for president is NOWHERE mentioned in our Constitution...did Kelly break into the candidate's responses to ask about our veterans. So Kelly in the few minutes of air time left changed the 'God question' to 'God and the veterans' and started with Florida Senator Marco Rubio who stated that, “I believe God has blessed us with young men and women willing to risk their lives and sometimes die in uniform for the safety and security of our people”...and who then went on to address in the short time he had the need to reform the current VA system and called the VA to task for NOT firing more executives following a series of scandals at its facilities.

Only a few minutes of air time was given to speak of those who wear or have worn our nations uniform...shameful...just shameful.

And this especially bad judgment call by the moderator's as to what issues needed to be addressed and what issues could have been way-sided for the time being or NOT asked at all, just added more insult to the injuries our veterans already face on a daily basis...injuries that include homelessness, lack of employment, and the fact that it's been over a year since the 'Veterans Access Choice and Accountability Act'...simply known as the 'Choice Act'...was passed...an act that was supposed to decrease wait times for veterans in need of medical care but has accomplished NOTHING to date to that affect.

Remember, while the 'Choice Act' was enacted NOT long after the Phoenix VA Hospital's Dr. Sam Foote exposed the 'needed to be kept hidden' truth that long wait times for medical care indeed led to the deaths of hundreds of veterans, this important piece of legislation has yet to make any real dent in the wait times for treatment meaning that the wait times at VA facilities mostly remain static. And when you add a whistle blower's report into the mix...a report stating that thousands of veterans have lost benefits due to so-called 'mishandling of applications' at one VA hospital in Atlanta, you just know our veterans are still in trouble...big trouble... and yet the moderators knew this and still our veteran's plight...the plight of those who give their all...was left out of the debate discourse.

So, as some veteran's lobbyists rightfully present their case to lawmakers in D.C. as to why veteran's health care must be taken away from the failing government controlled VA system and be put instead into the private sector where each and every veteran would be assured their rightfully deserved eligibility for private health care as afforded them under the 'Choice Act,' this, what should have been a must discussed issue, was completely ignored until the above said Gold Star widow was vocal enough to force a change in the debate's pre-set agenda.

Veterans issues and military issues...issues important NOT only to our service people and their families but to 'We the People' as well for we see the damage inflicted upon our military and our veterans by an administration that NOT only seems to relish in their plight, but instead chooses to extend a helping hand to those who deserve NOT help but a bus ticket back to from whence they came. And maybe it's hard for many of those running to truly understand the importance of these issues for none of the ten top tier candidates has any military service whatsoever (Donald Trump was issued a draft number but was NOT drafted, Jeb Bush also got a draft number but he too was NOT called, Dr. Ben Carson and Governor John Kasich NEVER served, and the other six candidates were too young to be sent to Vietnam before the draft was ended in 1973).

And after the fiasco that is Obama, questions need to be asked of each and every candidate with answers given as to how as Commander-in-Chief they will have our military deal with first, the cuts to America's military budget...second, the threat of ISIS and islamic terrorism (NOT just say we will fight them but tell us exactly how they will do so)...third, who amongst them will they say the two all-important words 'islamic terrorists' or better yet say the truth that we are at war with islam...all islam...and then have our military act accordingly...meaning without their hands tied behind their back...fourth, what is their plan of action as to how our military will face now renewed Russian aggression and China's expansion in the South China Sea...and lastly, can the damage caused to our military and the abominable care our veterans receive be repaired by a simple change in leadership and if so how will that change be implemented.

And while common sense should tell one that having candidates with NO military experience could translate into a lack of understanding of the intricacies as to what impact war has on our troops in the actual theater of war as well as on them when they return home, it would have been very telling and informative to hear what each candidate had to say about the possibility in the future of military experience being a prerequisite for the position of president. And, by the way, I personally believe it should be.

But again we were denied that chance as the candidates were NOT given the opportunity to show our military both past and present that they are foremost in the concerns of the one who will possibly become their Commander-in-Chief and who will be faced with trying to undo the damage this current president and his administration has done to those fighting to keep us free.

And again I say shameful...completely and utterly shameful...and I hope the next debate moderators afford the candidates the time needed to address these so important issues.