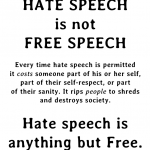 
Hate and the media on a small town scale
By: Diane Sori

"All politics is local" said former Speaker of the House Tip O'Neill. Basing it on the assumption that a politician's success (or failure) is directly tied to his ability to understand and influence the issues of his constituents, the phrase has come to represent the best and worst of politicians and is a microcosm of the vacuous leadership of those who are 'supposedly' held to a higher standard than 'We the People.'

And while we're all aware of the worst of politicians on the national level, I have now seen Speaker O'Neill's words filter down to the local level here in my own small bedroom community as an insinuation of racism has been leveled against us in the media. So sad indeed for it was one politician's words alone that cast poorly on that of our entire citizenry.

And like hungry wolves descending on its prey, the media is here to fuel those words instead of separating the city from the actions of this one man. But in all fairness, when insinuations of racism are involved it must be understood that this spiral towards racial hatred has been fueled by a president who has played the race card against 'We the People' every chance he gets...a man who has set back race relations 50 years or more...a man who has reopened the long healed wounds. And people feel this hatred in the air, and so it was only a matter of time before a duly elected official crossed the line and added their own special brand of fuel to the racial fire.

So with that said, it's common knowledge around our city that one of our sitting commissioners suffers from a severe case of Joe Biden 'Foot-in-Mouth' disease. The man who loves to hear himself bloviate while calling himself 'the champion of the people' has yet once again (yes he's done this before) cast a bad light on our city...on our city known as 'Someplace Special'...making us 'special' in ways NO city wants to be...in ways that is garnering us that very national attention NO city needs, for this man's words have cast us as racists because he deliberately used his official title in a racially charged Facebook post. And the media is ready to paint the 'all' in the same light as the 'one' allowing a despicable Facebook post done by this one man alone to have negative ramifications for our entire city and its residents.

Our elected officials, whether national or local, do indeed publicly reflect the supposed attitudes of those who elected them for they were elected by the majority but now have the responsibility to represent even those who did NOT vote for them as well. It's just too bad that their actions, especially their bad actions, are used as media fodder while the media conveniently overlooks the good most others do just to draw ratings numbers because lets face it...hate sells and sells big.

And when you have a post receiving 19 'likes' and six comments supporting that racist statement in a matter of minutes you know the haters are out, prowling, and spreading their special breed of hate all over NOT only Facebook but on the internet as well...spreading hate about our city overlooking the fact that the hate came from one man alone.

So while the post in question was removed from Facebook within hours, the damage was done, our city's reputation again dragged through the mud by a man who is the epitome of everything that is wrong with some of our elected officials today. And even sadder is the fact that like those in DC who defame and dishonor those they represent NOTHING will be done to him for the higher standards our elected officials are supposed to be held to are nothing but empty words having NO substance behind them...just bloviations on paper to give those they are supposed to call to task ammunition they can use to defend their despicable actions against the very people they were elected to represent.