Op-ed:
The timing says it all

The games this White House plays just keep getting better and better as yet another diversion has popped up in Obama's effort to try and distract us from Benghazi...to try and distract us just as more whistleblowers are scheduled to give testimony...for 'suddenly and miraculously' this past Monday, one year after the events in question occurred, mega news giant, The Associated Press (AP), comes forward and discloses that the Justice Department had seized their phone records.

While this had to come out, the timing of this disclosure is just too coincidental to NOT be suspect and in a word, stinks.  And don't try to tell me the AP, known for their investigative reporting, just found out about this seizing of records now...they didn't and they know we know they didn't.

But I digress...The AP says that just months before last November's presidential election (if you call that usurping an election), Eric 'Fast & Furious' Holder's Justice Department stormed into the main AP office and seized two months worth of more than 20 reporters and editors incoming phone records, cell records, and personal phone records, and also seized records for the main AP number in the House of Representatives press gallery...seized in a deliberately calculated intrusion on the First Amendment right to a free press...and did so without giving rhyme or reason for the seizure or the AP knowing if a judge or grand jury had signed off on needed warrants. 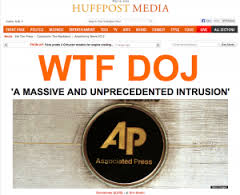 In a report to Holder criticizing the records seizure, AP President and CEO Gary Pruitt called the Justice Department's actions “a massive and unprecedented intrusion into how news organizations gather the news."

Further saying, “There can be no possible justification for such an overboard collection of the telephone communications of The Associated Press and its reporters"...“These records potentially reveal communications with confidential sources across all of the news gathering activities undertaken by the AP during a two-month period, provide a road map to AP’s news gathering operations and disclose information about AP's activities and operations that the government has no conceivable right to know.”

Of course he's right but there's that timing issue again as Benghazi, as it should, throws a shadow over all...a shadow that mustn't be ignored.

And as expected the White House says they had NO knowledge of this event or any of the other scandals coming forward...and if you believe that I've got some swamp land to sell you for even 'Prince' Harry Reid is denouncing this seizure along with the recently, as in last Friday, disclosed and admitted IRS targeting of conservative groups for additional screening of tax-exempt applications right before the election, saying "these actions are NOT partisan matters but Constitutional matters".

Constitutional matters..but...but during yesterday's hastily arranged press conference, Eric Holder looked straight into the camera and said the Justice Department "had a right to seize the records and trample on the Constitution" because last year the AP put American lives on the line when their wire service revealed details of a foiled plot to detonate a bomb on a US-bound airplane.

Saying that trying to determine who at the AP was the one responsible for the leak required aggressive action, Holder added that this was one of the “top two or three most serious leaks I’ve ever seen.”

Now ain't that something because we all know that if a terrorist attack had really been thwarted Obama would have been all over the television taking credit for it...narcissist that he is.

NO FREAKIN' WAY! Neither the government nor Barack HUSSEIN Obama himself have any right for any reason to trample on the United States Constitution...NO right at all...EVER!

Don't think I can make it any clearer than that.

And isn't it odd that Holder has now stepped aside...recusing himself from the investigation...claiming he's unfamiliar with the current status and details of the ongoing probe...yet still defending the probe...still defending the Justice Department's actions...almost like the ghosts of 'Fast & Furious' coming back to haunt.

And that timing issue keeps rearing its head yet again and again...calculated timing used to deflect all scandals away from the White House...away from Obama.  Timing used to protect his job at all costs even if it means this newest scandal will be used in helping to cover-up the murder of four Americans.

But could the AP's disclosure, even with its bad timing, possibly be the wake-up call for the mainstream media to finally accept the fact that they're also targets of this nefarious administration.  How I wish it were so but I know the sad reality is that they must protect their 'savior' NO matter the cost...after all, they created the myth and must see it through for if Obama falls they fall with him.