Times of Israel  Egyptian authorities on Tuesday ordered residents living along the country’s eastern border with the Gaza Strip to evacuate so they can demolish their homes and set up a buffer zone to stop weapons and militant trafficking between Egypt and the Palestinian territory, officials said.

The measure comes four days after Islamic militant fighters attacked an army post, killing at least 31 soldiers in the restive area in the northeastern corner of the Sinai Peninsula. After the attack, Egypt declared a state of emergency and dawn-to-dusk curfew there. Authorities also indefinitely closed the Gaza crossing, the only non-Israeli passage for the crowded strip with the world.

Slaughter: The scene in Sinai following the killing of 31 police officers by militants near Egypt’s border with Gaza

The buffer zone, which will include water-filled trenches to thwart tunnel diggers, will be 500 meters (yards) wide and extended along the 13 kilometer (9 mile) border.

The Egyptian army has waged a broad offensive in northern Sinai against Islamist groups, who have turned several areas into strongholds over the past three years, destroying most of the sprawling smuggling tunnels that connected the area with Gaza.

Egyptian media meanwhile has accused Gaza’s Hamas rulers of meddling in Egypt’s affairs, with some suggesting that the Islamic terror group is supporting fighters inside Egypt since the military overthrew Egypt’s elected president, the Islamist Mohammed Morsi, last year. Hamas officials deny any interference and criticize Egypt for imposing stricter border crossing rules since then.

Since Morsi’s ouster, attacks against security forces in northern Sinai have escalated, something Egyptian authorities blame on Morsi and his allies. Morsi’s Muslim Brotherhood group, which has been branded a terrorist organization in Egypt, denied links to violence. Another al-Qaida-inspired group called Ansar Beit al-Maqdis has claimed

responsibility for a number of attacks.

Egyptians guarding the border with Gaza

Instead of homes, the region will be replaced with a series of water-filled trenches, with the hope that this will drown any Gazans who try to dig tunnels into the Sinai Peninsula. 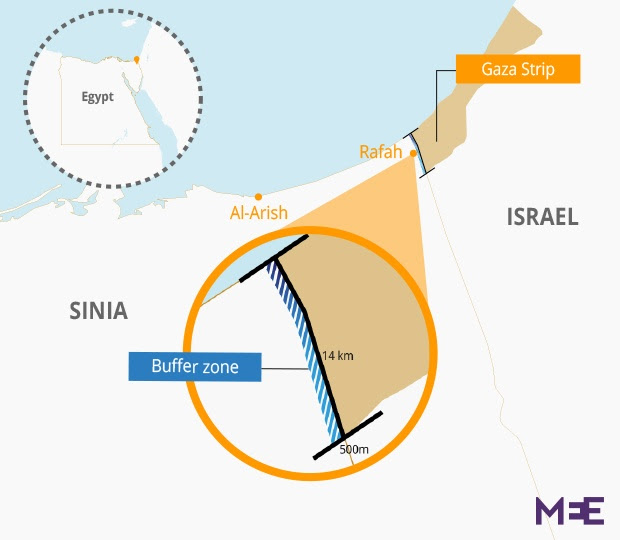 In addition, Egypt plans to “indefinitely” close the border crossing into the Gaza Strip, meaning the sole non-Israeli crossing, through which humanitarian aid might cross, will be entirely inaccessible. Given the Sisi government’s hostility to the Gazans, this could remain the case for a long time to come.