PELOSI FACES DEM REVOLT OVER RESOLUTION TO CONDEMN ANTI-SEMITISM: House Speaker Nancy Pelosi is "taken aback" by the growing dissent and anger among rank-and-file Democrats over a possible resolution to formally condemn anti-Semitism, stemming from a controversial Muslim freshman lawmaker's recent comments, a Democratic source told Fox News ... The stalled resolution originated after freshman Democratic Rep. Ilhan Omar of Minnesota, for at least the second time in recent months, ignited an uproar for echoing tropes critics have deemed anti-Semitic. The debate over how to address Omar’s latest remarks has overtaken House Democrats in recent days and underscores both Pelosi's tenuous grip on control of the House and the growing power of the party's far-left progressive wing.

Omar refused to address questions Wednesday about accusations that she’s anti-Semitic. A vote on the resolution, which was originally planned for earlier this week, did not appear on the House's official docket for Thursday.

CLICK HERE TO GET THE FOX NEWS APP.
FIREWORKS FOR DHS SECRETARY AT HOUSE HEARING: Homeland Security Secretary Kirstjen Nielsen told the House Homeland Security Committee on Wednesday that the U.S. faces a "real, serious and sustained crisis at our borders." However, she was caught in a series of heated exchanges with lawmakers while being questioned over family separations at the border, with one Democrat accusing her of having "no feeling, no compassion." ...  Nielsen was grilled by members of the Democratic majority over claims that the Trump administration went out of its way to separate families. “I think it’s really important, Madam Secretary, that you talk about it and you use the right language. This was not the law, OK?,” Rep. Kathleen Rice, D-N.Y., said. “This was a policy that the attorney general of this country announced was a new policy that they were going to rip kids away from their parents. So I think it’s very important that the record reflect that.” 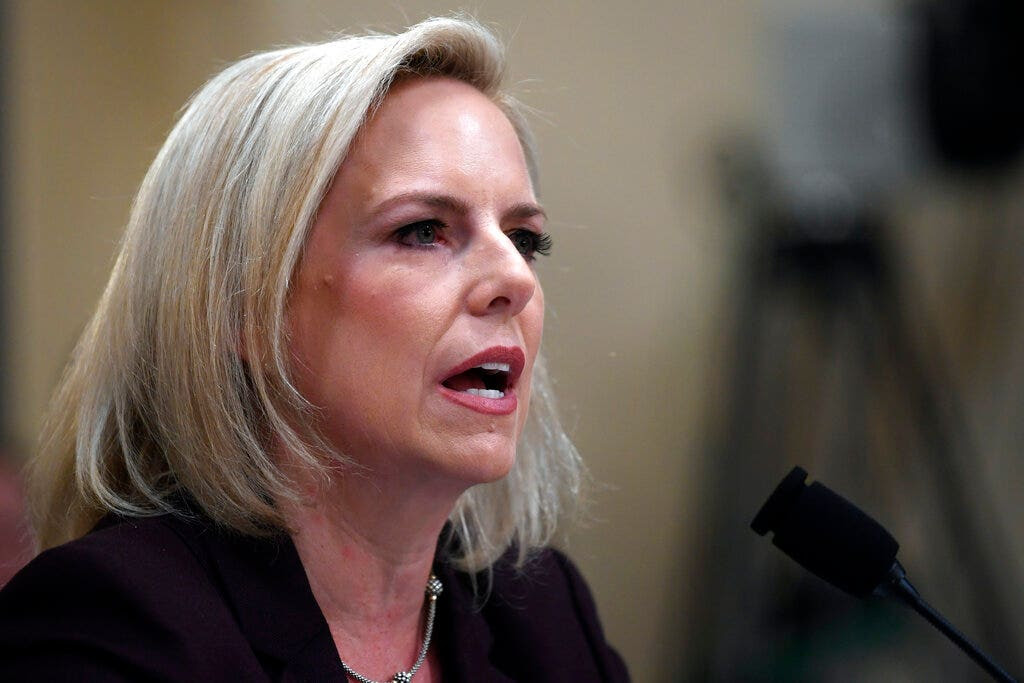 COHEN UNDERMINES RUSSIAN CONSPIRACY AGAIN: Michael Cohen on Wednesday provided the House Intelligence Committee records that undercut allegations that President Trump's attorneys made critical edits to alter the timeline of failed negotiations to build a Trump Tower in Moscow - another hole in another aspect of the Russian collusion theories that have dogged the president ... Trump's former fixer and personal attorney provided documents that showed that "the original date in the original draft" of Cohen's false congressional testimony on the conclusion of failed Trump Tower negotiations was January 2016, a source familiar with the documents told Fox News. Cohen acknowledged in a guilty plea last year that he misled lawmakers in 2017 by saying he had abandoned the project in January 2016, when in fact he pursued it for months afterward as Trump campaigned for the presidency.
Cohen's latest act of cooperation with authorities comes amid reports that he directed his attorney last year to seek a possible pardon from President Trump.
'GIRLFRIENDS' COME TO R. KELLY'S DEFENSE: Following R. Kelly’s explosive interview with “CBS This Morning” co-host Gayle King about the multiple sex abuse allegations he faces, two women who are reportedly dating the embattled singer are defending him, with one claiming that her mother and father told her to lie about how old she was ... Azriel Clary, 21 – who appeared alongside Joycelyn Savage, 23 – told King that R. Kelly believed she was of legal age when they first met. Clary met the 52-year-old star when she was 17, whereas Savage was 19, according to CBS. The pair also reportedly dismissed their family’s view that they’d been brainwashed. R. Kelly, meanwhile, is in jail for not paying $161,000 in child support.
DNC BARS FOX NEWS FROM HOSTING PRESIDENTIAL PRIMARY DEBATES: The Democratic National Committee has barred Fox News from hosting any of its presidential primary debates out of concern that the network would not provide a "fair and neutral forum" for candidates ... “I believe that a key pathway to victory is to continue to expand our electorate and reach all voters,” Tom Perez, DNC chairman, said in a statement to the Washington Post. “That is why I have made it a priority to talk to a broad array of potential media partners, including Fox News. Recent reporting in the New Yorker on the inappropriate relationship between President Trump, his administration and Fox News has led me to conclude that the network is not in a position to host a fair and neutral debate for our candidates."
While some Fox News Channel opinion hosts have come under fire for ties to the Trump administration, Chris Wallace, Bret Baier and Martha MacCallum are anchors from the news division who have been praised for their handling of past debates. In 2016, Wallace moderated a presidential debate between Donald Trump and Hillary Clinton. “We hope the DNC will reconsider its decision to bar Chris Wallace, Bret Baier and Martha MacCallum, all of whom embody the ultimate journalistic integrity and professionalism, from moderating a Democratic presidential debate. They’re the best debate team in the business and they offer candidates an important opportunity to make their case to the largest TV news audience in America, which includes many persuadable voters,” Fox News Senior Vice President Bill Sammon said in a statement.

Members of Fox News Influencers:
Fill out our qualification survey and join us. Thank you for your continued support in our company's growth.
------------------------------------------------------------------------------------------------------------------
TODAY'S MUST-READS
'Jeopardy!' host Alex Trebek says he’s been diagnosed with stage 4 pancreatic cancer.
Michael Goodwin: Dems have only themselves to blame for Ilhan Omar’s anti-Semitic comments.
U.S. Sen. Martha McSally says she was 'preyed upon and then raped' in Air Force by superior officer.
Last Blockbuster store on Earth located in U.S., as Australian location closes.
MINDING YOUR BUSINESS
Sprint, T-Mobile get OK from White House, bigger test remains at DOJ and FCC.
As Facebook loses millions of users, Zuckerberg plans big, new shift.
Amazon to close its pop-up store locations.
STAY TUNED
On Fox Nation:
The Big Story: The Shocking Story of Susan Smith
Two little boys go missing, their mother pleads for help, and law enforcement sets out on a frantic search. But as new evidence surfaces, see how a helpless mother became the prime suspect in this shocking true crime case! Watch a preview of the show now.
Not a subscriber? Click here to join Fox Nation today!
On Fox News:
Fox & Friends, 6 a.m. ET: Special guests include: Eric Trump; National Security Adviser John Bolton; a look at how a large-scale fentanyl operation was uncovered at a New Jersey highway rest stop.
On Fox Business:
Mornings with Maria, 6 a.m. ET: Special guests include: HUD Secretary Ben Carson; Sean Spicer, former White House press secretary; U.S. Rep. Ted Deutch, D-Fla.; U.S. Rep. Tom Reed, R-N.Y.; U.S. Rep. Josh Gottheimer, D-N.J.; Jay Timmons, president and CEO of the National Association of Manufacturers; Liz Peek, Fox News contributor.
On Fox News Radio:
The Fox News Rundown podcast: "HIV Hope with Second Remission" - A second patient reportedly has been cured of HIV, leading to some optimism for those searching for an end to the virus. Jesse Milan Jr., president and CEO of AIDS United, talks about living with the disease and the future of treatment. DHS Secretary Kirstjen Nielsen testified before House lawmakers on Wednesday that the crisis at the border is real and will eventually overwhelm law enforcement. Fox News correspondent Casey Stegall and Gil Kerlikowske, former commissioner of U.S. Customs and Border Protection, weigh in. Plus, commentary by Howard Kurtz, host of "Media Buzz."
Want the Fox News Rundown sent straight to your mobile device? Subscribe through Apple Podcasts, Google Play, and Stitcher.
The Brian Kilmeade Show, 9 a.m. ET: Democrats' divide over the resolution to condemn anti-Semitism, the 2020 presidential election, North Korea, the Mueller investigation and multiple other new Trump probes will be the topics of debate with the following guests: "Fox & Friends" co-host Steve Doocy, "Fox News Sunday" host Chris Wallace; Stephen Hayes; and Mark Morgan, former Border Patrol chief.
Benson & Harf, 6 p.m. ET: Special guests include: Mo Elleithee, executive director of Georgetown University's Institute of Politics and Public Service and Fox News contributor; Tom Rogan, Washington Examiner columnist.
#TheFlashback
1965: A march by civil rights demonstrators is violently broken up at the Edmund Pettus Bridge in Selma, Ala., by state troopers and a sheriff's posse in what came to be known as "Bloody Sunday."
1955: The first TV production of the musical "Peter Pan," starring Mary Martin, airs on NBC.
1926: The first successful trans-Atlantic radio-telephone conversations take place between New York and London.
Fox News First is compiled by Fox News' Bryan Robinson. Thank you for joining us! Have a good day! We'll see you in your inbox first thing Friday morning.
Posted by Diane Sori at 7:39 AM