By Ed O'Keefe and Rosalind S. Helderman / The Washington Post


The Senate failed Tuesday to advance a bill to keep federally subsidized college student loan rates lower for another year, prolonging debate on an issue that has emerged as an election-year flashpoint.

A protester, dressed as the "Master of Degrees," holds a ball and chain representing his college loan debt during a protest last October in D.C. (Jacquelyn Martin - AP) 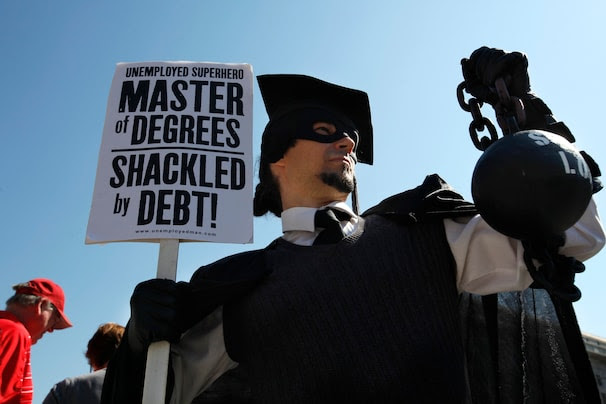 On a party-line vote, senators voted 52 to 45, short of the 60 votes necessary to proceed to debate on the bill. There is no clear path forward at the moment for lawmakers, who have until July 1 to reauthorize lower rates for roughly 7 million borrowers who would otherwise see rates on subsidized student loans jump from 3.4 to 6.8 percent.

Democrats and Republicans agree that the loan rates should remain low, but — as with most noncontroversial issues these days — lawmakers disagree on how to pay for the plan.

The issue is of growing concern among younger voters and their parents and has dominated the campaign trail in recent weeks. Using his campaign bully pulpit, President Obama has pushed Congress to quickly approve an extension of the lower rates for another year, and presumptive Republican presidential nominee Mitt Romney has done the same.

A House Republican plan approved in late April would pay for the lower rates by cutting almost $6 billion from a preventative health-care fund estbalished in the Democrats’ health care reform bill.

Democrats pushed a plan to pay for the extension by ending a tax break that allows operators of some businesses with three or fewer shareholders to avoid paying payroll taxes by labeling some of their income as business profits rather than wages.

In a statement, the White House said it was “extremely disappointing” that Republicans voted against keeping loan rates low in favor of protecting people who take advantage of the tax loophole.

Senate Majority Leader Harry M. Reid (D-Nev.) said the voted showed that Republicans are “more interested still in obstructionism rather than progress” and said Democrats would not slash the health fund, which pays for cancer screenings, diabetes prevention and other basic medical needs.

Harkin insisted that Democrats offered Republicans a chance to vote on their version of the measure alongside the Democratic one, if they would agree to allow the Senate to proceed to a full debate on the bill. But Harkin charged that GOP leaders rejected that proffer because they did not want to force their own members to vote to eliminate the preventative care fund.

“We have a serious offer on the table — to close a tax loophole ... that’s allowing a lot of people to avoid paying their fair share for social security and Medicare,” he said.

Republicans have noted that Democrats had signaled a willingness to cut the same preventative care fund during negotiations over how to pay for extending the payroll tax vote. But Harkin said there’s a difference between reducing the fund, which Democrats had said could be acceptable, and eliminating it, as Republicans now propose. “It’s the difference between taking a couple of pints of your blood or taking all of your blood,” he said.

But asked by reporters if negotiations are underway over a way to pay for the student loan reduction that would be acceptable to both Republicans and Democrats, the group said only that they are willing to listen to ideas and that the Democratic proposal is reasonable.

“We’re still open to sensible proposals to pay for this,” Reed said.
Posted by Diane Sori at 1:54 PM