Op-ed:
Tea Partiers will determine the mid-terms...
and the Republicans know it
By: Diane Sori

Words out of the mouth of RINO Senator John McCain...good words but they make one wonder which side he's addressing this to...as if we didn't know.

And so we have liberals to the left of us...RINOS NOT quite to the left but so NOT to the right of us...and caught in the middle is we Conservatives and TEA Partiers. And the prize all sides want is the Senate...the left wants to keep it, the RINOS will go whichever way the wind blows, and we in the middle know that to retake the Senate as long as we keep the House means Barack HUSSEIN Obama is basically rendered politically impotent from doing any more harm to our beloved America.

Tuesday, November 4, 2014...the day we can set things right...true Conservative Republican/TEA Party right that is.

With all 435 seats in the House and 33 of the 100 seats in the Senate up for grabs...and with 38 state and territorial governorships thrown into the mix...when you add in Obama's poll numbers thankfully tanking...Republicans now have their best chance in a decade to take back the Senate...that is if they stop all their in-fighting...which the Democrats are exploiting to the hilt...and unite together as a strong cohesive unit against the sure to come liberal Democratic assault of lies and innuendos. The Democrats know they are teetering on the abyss Senate-wise...and the Democrats know that their chances are practically nil for recapturing the House...so 'Prince' Harry Reid in the Senate and 'Botox Queen' Nancy Pelosi in the House will pull out all the stops to try and stop the charging Republican elephant.

And the bottom line numbers wise is that Republicans need to pick up six seats to win back the Senate majority, while the Democrats must fight to keep 21 seats, including seven in key Senate battlegrounds states where Obama lost to Romney in 2012. To re-take the House, Democrats need 17 seats of the currently held 31 majority Republican seats, an almost impossible task to do with the ObamaCare fiasco hanging over their heads. If all the stars are aligned correctly...yeah I know...this should mean the Republicans would have an easy time keeping the House, but they can still blow it with all their nonsense between the true Conservatives of the party and those whose moderation leans so far to the left that they might as well put a 'D' after their name and be done with it. 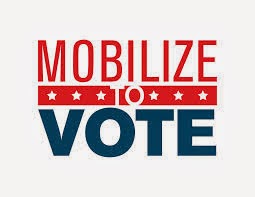 And while I know what I'm going to say next might irk some it still must be said for if all of us out in the trenches who are working on the grassroots level would concentrate our efforts solely on the Congressional and Senatorial races...meaning put all the local small issue races aside during this election cycle...then we very well could win back the Senate. And while I know many believe change starts from the bottom up...as in the local level...in this election cycle it must start from the top down for only then will we paint America red from coast to coast. And if we succeed, Barack HUSSEIN Obama will NOT be able to get even one of his anti-American agenda issues passed...and maybe just maybe with a super-majority ObamaCare can become a nightmare we do wake up from.

However, it must be said that Obama is NOT likely to allow this to happen without a fight and he will do every and anything he can to split the Republican party even more than it already is...and this we cannot abide for if he succeeds once easily won Senate and House races will indeed be lost.

But as I said before, the Republicans must now accept NOT speak against the TEA Party if they are to pull off this most critical of political maneuvers. Republicans need TEA Party voices to do what they are too meek to do...to afraid of the race card to do...and that is to keep hammering away the point of just how ObamaCare is tied to and effects one-sixth of the U.S. economy. And only with TEA Party voices can the Republicans successfully pound home the all important message of how Obama's lack of leadership is both an outright abuse of and a complete and total disregard for our Constitutionally laid out system of checks-and-balances. But sadly, the RINOS amongst us are watering down this critical message as they instead try to pander to the ILLEGALS for their votes...which by the way they will NOT get...by promising them amnesty reform.

Remember, TEA Party groups were formed upon beliefs of smaller government, fiscal responsibility, power in the hands of local government, strong national defense, and less intrusion into the private lives of 'We the People.' And what the establishment hierarchy of the Republican party needs to accept if they are to win elections again is the simple fact that the once great party of Lincoln and Reagan needs the TEA Party NOT to just join their ranks but to take those founding beliefs and help remold those vacillating too far to the left...to help bring them back to 'God and Country.' And as the old adage about strength in numbers goes, math dictates that those with the most numbers wins elections...and with the TEA Party movement now 130+ million strong the Republican Party would serve itself well by welcoming them into the fold.

And so if the Republicans were smart and were really serious about winning back the Senate in November and then taking back the White House in 2016, they must embrace the heart, the mind, and the soul of the TEA Party for the TEA Party speaks about how 'We the People'...how we everyday Americans love our freedoms...how we love our country...and how we love our Constitution...and once the Republicans felt that way too.

And just for the record, I am a Republican...a proud TEA Party Republican embracing the values and ideals of Ted Cruz, Mike Lee, and LTC Allen West.
Posted by Diane Sori at 12:00 AM