Obama's Politics and Policies are Indeed on November's Ballot
By: Diane Sori

Let's get something straight right upfront...Barack HUSSEIN Obama has NO love for America, Americans, our military or our veterans, Israel or any of our other true allies, nor does he hold any affinity whatsoever for Christians and Jews...period. Barack HUSSEIN Obama is indeed (I believe) a muslim and a supporter of all things islamic... of all things counter to the Judeo-Christian principals, morals, and values upon which this great nation was founded...and the fabric of our American society in his eyes would be better served by prayer rugs extending from one coast of America to the other.

Barack HUSSEIN Obama's presidency is a failure...a complete and total failure. The man who promised 'hope and change' instead has delivered NOTHING but 'distrust, stagnation, utter despair, and disgust.'

And his response to the anger building NOT just amongst Republicans and TEA Party members but even amongst some of his own party's loyal has shown that this man elected to the highest office in our land...or should I say this man who stole an election through voter fraud and intimidation, machine tampering, and the dead rising from their slumber to vote...has proven time and again that America's enemies are indeed his trusted friends and allies.

And while the name Barack HUSSEIN Obama might NOT be on the November ballot, know that his politics and policies...both domestic and foreign...sure the hell are.

On the domestic front, we all know Obama's so-touted economic recovery is anything but...that the jobs numbers released every week are in reality numbers that hide the all important truth that more Americans are dropping out of the work force then ever before or are being demoted to part-time employment.

And lest we forget his plan to grant amnesty through his 'pen and his phone' to 34 million ILLEGALS so that they can compete for and take away jobs from mostly the poor and his own core black base. And we know this is being done solely to increase the Democratic voting block for generations to come as these people...these now 'LEGAL ILLEGALS' will gladly sell their souls and their votes to the Democratic party in exchange for even more freebies and handouts then they now already readily and greedily receive.

Simply put...jobs for Americans be damned...jobs in exchange for votes will become both this administration's and any future Democratic administration's mantra as taking jobs away from LEGAL Americans will well fulfill their goal of having our economy limp along until it finally just gives out and crashes.

And what of Obama's anti-military agenda...his tying of our troops hands so they cannot fight to win...his defaming attacks on both those currently wearing our nation's uniform and on our vets...his cutting our fighting forces to record low numbers along with his cutting of America's defense budget to where he has actually put the homeland in danger. And let's NEVER forget the more than 3,500 American troops who died in Iraq ...along with those who came home anything but whole...and add in all the American treasure spent to help free a country from terrorist groups like ISIS who are now basically in control.

And what of Obama's foreign policy agenda itself...it would be quite laughable if it wasn't actually more dangerous...extremely more dangerous...to America's national security and to the health, safety, and welfare of 'We the People' than that of any previous president's foreign policy agendas for this man's foreign policy agenda...or should I say lack of a true agenda...is one that has calculatingly and with malice succeeded in attacking our nation's sense of well-being. Now we are forced to constantly look over our shoulders because instead of attacking our enemies with strength and fortitude...instead of keeping our enemies 'over there'...this man has placated said enemies so that they are now 'over here' as well...welcomed to enter through our still unsecured southern border by a man who daily works to implode America from within...that is in between rounds of golf  I should say. 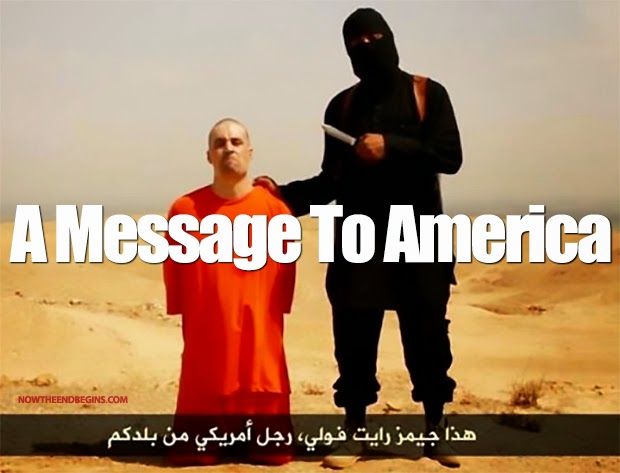 And what of America's enemies...especially the enemy called ISIS...an islamic...YES islamic...enemy that our civilized minds still cannot totally comprehend. And it took ISIS to finally get Obama's attention of sorts but only after they beheaded two innocents of our own...and only after 'We the People' showed outward revulsion, anger, and disgust. Finally addressing in his usual limited and superficial sort of way the savagery of those who are his brethren...this most miserable excuse of a president still continues to allow ISIS to relish in beheading Christians and other minorities as he, for the most part, remains silent or gives mere lip-service to all the atrocities they do.

And ISIS counts on this for Obama's silence is indeed deafening NOT just towards their brutality, but also towards Russia's aggression in Ukraine as well as towards China's military build-up and surging to the forefront economy. And that deafening silence can also be heard towards both Iran moving forward with its uranium enrichment program on their way to becoming a nuclear power as well as his silence in defending Israel against her enemies for Israel's enemies are our enemies as well. And right now his silence is loudly screaming as our Marine remains languishing in a Mexican jail while he and his minions in the media keep us focused on a virus called Ebola.
And now with the November mid-terms less than two weeks away it's important to remember these things above all else for these are the things...the issues...the true politics and policies...that affect us all. These are the things that are on the ballot...the economy...jobs...ObamaCare...our unsecured southern border...ILLEGALS...amnesty... our military...a foreign  policy agenda that favors America's enemies...islamic terrorists from 'over there' now showing up 'over here'...the slaughter and savagery done against Christians, Jews, and any who do NOT believe in their false god known as allah... savages by the name of ISIS, al-Qaeda, and Khorasan...biological stealth jihad possibly in the guise of Ebola...the list is endless and almost all encompassing. And a BLUE Senate will be the death knoll for America as our Constitutional Republic will most assuredly fall by the wayside to be replaced by the socialistic policies and islamic politics of the man known as Barack HUSSEIN Obama...the enemy within that some 'supposedly' on our side will have willingly allowed NOT to be stopped.
Posted by Diane Sori at 12:06 AM