Op-ed:
Fire Debbie...the battle cry of District 23 and the nation
By: Diane Sori 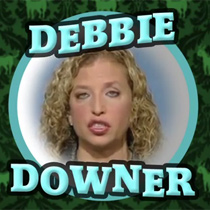 "This election should not be about defeating Barack Obama."  So says our favorite Obama lapdog and mouthpiece, the Nancy Pelosi wannabe...Congresswoman/DNC Chair Debbie Wasserman Schultz.

And guess what...she’s somewhat right as this election must NOT be only about defeating Obama but also about defeating this sad excuse of a Congresswoman as well.  And even though voting Barack Hussein Obama out is the key objective, we must also vote out his top supporters, like Debbie, in order to give our country back to its rightful owners...’We the People.’

And I can unequivocally say that with NO holds barred, as unfortunately right now 'Debbie Downer,' as we in her district like to call her, is my current, but hopefully NOT for much longer, Congresswoman.

Thankfully, ‘We the People’ know that Obama’s failed policies have awoken ‘a sleeping giant’ whose arms span across America.  We know the sad realities of those failed policies on small government, on free markets, and on our personal liberties, freedoms, and successes.  And Debbie Wasserman Schultz has proven her support time and again for those failed policies, including the Obama steamrolling of our economy.

Besides being a supporter of TARP, 'Debbie Downer' is also a very vocal mouthpiece in favor of the rip-roaring tax known as ObamaCare.  She also voted for internet regulations, the warrantless detention of US citizens, massive funding cuts to both Medicare and our Defense budgets, and has, along with Obama, stabbed our friend and ally Israel in the back by telling them to return to their pre-‘67 borders and by endorsing Obama’s call for East Jerusalem to be the capital of a Palestinian state.

And what makes those last ones even more despicable is that Debbie Wasserman Schultz is Jewish.  She knows very well that those pre-’67 borders are indefensible in areas, and that surrendering any part of Jerusalem is NOT an option for Israel.  And yet as a traitor to her heritage and her people, Debbie Wasserman Schultz supports, backs, and publicly bloviates the Barack Hussein Obama rhetoric concerning Israel, and has NO problem or conscience doing so.

"I’m not running for President" Debbie squawks as she continues to ignore her opponent, Republican KAREN HARRINGTON’S request for her to release her tax returns. While she screeches non-stop for Mitt Romney to release his tax returns, Debbie Wasserman Schultz just doesn’t believe in full disclosure for herself.  But then again she does have things to hide like her failure until this year to report her second home in New Hampshire (which BTW has been mortgaged since 2005 and should have been reported), her holdings in a foreign drug company and the State Bank of India, and her offshore investments including a Swiss Bank Account...the very things she continuously chastises Mitt Romney for.

And even with all this there’s more that should NOT only shock you but should light a fire of discontent so great under those living in District 23 that they flood the polls en-masse on Election Day.  First, if Debbie Wasserman Schultz is re-elected she is in line to become Speaker of the House if the Democrats retake the House or at worst the House Minority Speaker if they don’t.  Second, the Speaker of the House is third in line for the presidency meaning this little weasel could assume the presidency if something happened to the president and vice-president.  Now that is one hell of a scary thought!  And third, there’s been musings out of DC that if Debby does NOT assume either of those two positions, and if she and Obama are re-elected, then she will be rewarded for her loyalty to Obama and the party with the position of head of HHS, the Department of Health and Human Services.  That’s the government department that’s the main agency for protecting the health of all Americans and providing essential human services...now that is a scary thought in its own right...Debbie Wasserman Schultz telling us what’s good for us!  That’s almost as bad, if NOT worse, than Michelle telling us what we can and cannot eat!

So the game is now on to unseat Debbie Wasserman Schultz...a game that we must NOT lose, because four more years of 'Debbie Downer' in any position is NOT something that District 23 or America needs or wants.  And the person chosen overwhelmingly by the voters on primary day to unseat this little Obama lapdog is KAREN HARRINGTON, a principled fiscal conservative, a woman of moral character who will work for and listen to the voice of ‘We the People.’  And a woman I am honored to NOT only support but also call ‘friend.’