Netanyahu gets it...Obama does not
By: Diane Sori 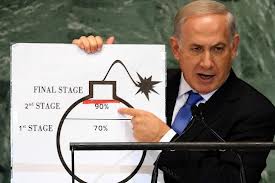 Yesterday, in a well-modulated speech before the UN General Assembly, Israeli Prime Minister Benjamin Netanyahu responded to Iranian madman Ahmadinejad's anti-Israel rhetoric spewed forth on Yom Kippur, the holiest day of the Jewish calendar.  Was this a direct and deliberate scheduling insult committed by the Useless Nations, who solidly and unabashedly stand with Israel’s enemies...I believe so.

Netanyahu began by answering, in carefully chosen words, Ahmadinejad’s comment that Israel has no roots in the region.  He said, with a calculatedly reserved passion, that “3000 years ago, King David reigned over our eternal Capital of Jerusalem...the Jewish people have come home…we will never be uprooted again!”

NEVER AGAIN...never ever again will the Jewish people be thrown out of their homeland...a homeland given to them by God.  My words but I’m sure the thoughts of this great man.

Netanyahu then laid out in no uncertain terms that Iran must NOT be allowed to acquire a nuclear weapon, arguing that the threat of force must be seriously considered if all else fails.

"The hour is getting late, very late...I speak about it now because when it comes to the survival of my country it is not only my right to speak but my duty to speak" Netanyahu said with a passion for his country unseen by our president for this country.

Reiterating the simple fact that "sanctions have NOT stopped Iran's nuclear program at all," Netanyahu continued while holding up a simple diagram of a ticking time bomb to show just how close Iran is to being nuclear weapons ready.

"By next summer Iran will have enough enriched uranium for a nuclear weapon" Netanyahu went on to say, driving home the fact that the world’s nations must draw a red line that Iran dare NOT cross or it will be too late to stop them.

Very wise words as playing cat and mouse in this instance is just too dangerous a game to play.  "A red line must be drawn before Iran is weeks away from a nuclear weapon."

I think the red line needs to be drawn now, and I believe Netanyahu believes this also for he stated that he believes a "clear red line" will force Iran to back down. "Nothing could imperil our country (Israel) more than a nuclear armed Iran" Netanyahu said but I will go one step further...NOTHING will imperil the world more than a nuclear armed Iran.

Nor will anything imperil the world like radical islam.  Netanyahu said it best with the following simple words,

"Radical islam is bent on world conquest...they want to end the modern world....they are rooted in the grounds of intolerance...they want to drag humanity back to the age of unquestioning dogma."

Benjamin Netanyahu has all the pieces of the puzzle in place for he clearly sees and understands the danger radical islam poses to every man, woman, and child for he knows that NO person nor any nation is safe as long as these barbarians remain unchecked...as long as madmen like Ahmadinejad are allowed to have in their possession weapons that can wipe out a nation, a people, a faith.

Netanyahu closed with a simple sentence...a powerful sentence, "The Jewish people have always looked towards the future."  What the world needs to understand is that not only Israel, but all nations and all peoples will NOT have a future to look towards if a madman has weapons that could kill us all.

...a friend by the name of Mitt Romney.

Yesterday, Benjamin Netanyahu showed the world what a true leader of men looks like...on November 6th ‘We the People’ will show him and Israel that we got it right this time.
Posted by Diane Sori at 8:55 AM