'What's at stake is the entire fate of firearms in America' 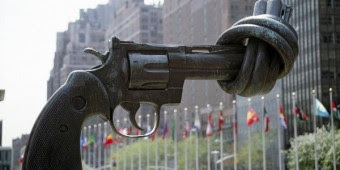 Americans who thought the United Nations’ gun-grabbing agenda collapsed with the adjournment of the Small Arms Treaty meetings in July are in for a surprise.

Enter the U.N. Programme Against Small Arms, an administrative program that National Association for Gun Rights Executive Vice President Dudley Brown says wouldn’t require a vote in Congress to be enacted, but has so far flown under the radar of most gun-rights groups.

A U.N. conference called the “Second United Nations Conference to Review Progress Made in the Implementation of the Programme of Action to Prevent, Combat and Eradicate the Illicit Trade in Small Arms and Light Weapons in All Its Aspects) that concluded this past week drafted a 2012 report that says the body maintains its commitment eliminate small arms trade, despite the July setback.

“In implementing the Programme of Action at the national level,” the report said, “States, where they have not yet done so, undertake: To support the development and implementation of adequate laws, regulations and administrative procedures to prevent, combat and eradicate the illicit trade in small arms and light weapons in all its aspects, including diversion of small arms and light weapons to unauthorized recipients.

“To establish or strengthen, as appropriate,” the report continued, “national coordination mechanisms to improve coordination among governmental agencies, in particular among law enforcement, national border and customs control agencies, and arms transfer licensing authorities, to implement the Programme of Action.

“This should include aspects of the illicit manufacture, control, trafficking, circulation, brokering and trade, as well as tracing, finance, collection and destruction of small arms and light weapons,” the report concluded.

The full scope of what the program intends to accomplish are explained on the U.N. Office for Disarmament Affairs web site.

Further the site says, “The illicit circulation of small arms, light weapons and their ammunition destabilizes communities and impacts security and development in all regions of the world.”

The website further explains what the program intends to implement in the participating countries.

“If national law enforcement officials were able to trace small arms back to their last legitimate owner, who might then be held accountable, this would form an effective measure against illicit trade and diversion,” the website states. “For that purpose, it is essential that the weapon be marked upon production and import, and that appropriate records be kept. Existing stocks should also be marked. Although many weapons are marked upon production and import, international cooperation in marking and tracing of small arms is in its infancy.”

Brown says the U.N. gun ban is difficult to stop.

“This fight, however, is on such a massive scale,” Brown said in a statement, “with so many moving targets and on so many fronts, that it has been a virtual course in adapting tactics to fit the battle.”

“When this fight with the U.N. first surfaced,” Brown said, “the institutional gun lobby dismissed the threat as paranoia, but we knew the U.N.’s agenda put the United States’ freedoms squarely in their sights.”

Brown also says that the U.N.’s target is nothing less than complete control of all guns and ammunition.
“What’s at stake is the entire fate of firearms in America,” Brown said.

And Brown says there’s only one way to stop the U.N. Programme Against Small Arms. It starts with diligent, local lobbying and activism.

“Grassroots activism – led by my organization, the National Association for Gun Rights – derailed the U.N.’s Small Arms Treaty,” Brown said. “But now they’re using a more insidious avenue called the Programme Against Small Arms to push for global gun control. And it just might work, unless we mobilize Americans against it.”
Posted by Diane Sori at 5:16 PM