PHOTOS.COM
It appears that aging Hollywood movie star Robert Redford did not see the movie “Argo,” which was awarded Best Picture at the 2013 Academy Awards.

Had Redford seen it, he might have noticed that in 1979 Muslim radicals under Ayatollah Khomeini took Americans hostage. The only country to offer assistance was Canada.

Such history seems lost on Redford, an ultra-rich liberal active environmentalist. (His net worth is estimated at $170 million.) Redford is vehemently against the United States’ importing oil sands from Canada. His criticism reached a crescendo in the wake of the Exxon Mobil Corp. pipeline spill in Mayflower, Ark., on March 29.

It is estimated that 36,000 barrels of crude oil leaked from a pipeline, which forced the evacuation of more than 20 families from their homes.

In the aftermath, Arkansas Attorney General Dustin McDaniel is asking Exxon Mobil to pay $4 million to help pay for an investigation as to why the pipeline leaked.

The oil spill is only 1,000 miles from Redford’s mansion in Sundance, Utah. (The good news for the actor is that he also has residences further west.)


Actor and environmentalist Robert Redford has been an outspoken opponent of the Keystone XL Pipeline since the beginning. Now that a pipeline in Arkansas has ruptured leaving a residential community with thousands of gallons of tar sands crude right in their yards, Redford is hoping the government will wake up to the dangers of building any new pipeline.


(W)hen it comes to the proposed Keystone XL pipeline… the Pegasus rupture in Arkansas is another red flag. We’ve had a lot of these red flags lately that show us what a raw deal tar sands is and we ignore them at our peril.
…
How many red flags do we need before we realize that the solution is to stop tar sands expansion and say no to tar sands pipelines? I think we’ve seen enough.

Redford wants Americans to contact their Congressmen and demand that they pressure President Barack Obama to pull the plug on the pipeline, a decision the President is expected to make this summer.

Redford and his Green advocates are making a mistake regarding Keystone and oil imported from Canada. This is why: 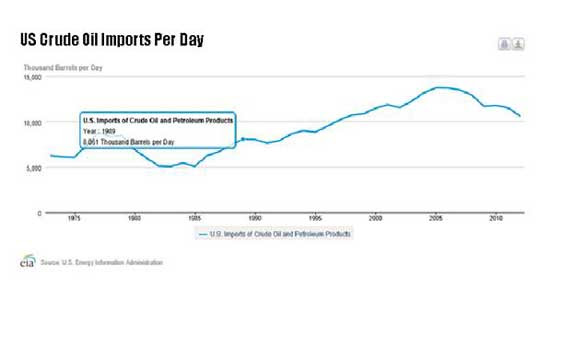 As the chart above shows, America must meet its energy needs with imported oil. My question: Would you rather deal with Allison Redford, the democratically elected premier of Alberta and a distant relative of Robert Redford, or would you rather buy oil from King Abdullah of Saudi Arabia, the anointed leader of the kingdom that was the birthplace for 15 of the 19 9/11 hijackers?

I am a dual citizen of the United States and Canada. I think who America trusts for its future oil supplies is an important question.

It is reported that King Abdullah of Saudi Arabia has four wives and dozens of children. The king didn’t allow U.S. forces inside Saudi Arabia during the Iraq war. He has also launched a series of crackdowns including torture and public beheadings.

Ezra Levant wrote what Al Gore might refer to as “an inconvenient truth,” in his book Ethical Oil: The Case for Canada’s Oil Sands:


Saudi women are treated as the property of men, with fewer rights than children and only slightly more rights than animals. They are forbidden from driving cars; they cannot travel abroad without a man’s permission; and they can’t even have elective surgery without their master’s consent.

There is no gay marriage or any talk of it in Saudi Arabia.


And, according to Amnesty International, Saudi Arabia executes gays simply for being gay. Amnesty has documented this barbaric punishment, carried out in full medieval style: a beheading and a crucifixion.

Even children are not spared Saudi Arabia’s merciless “justice.” Teenaged “criminals” are beheaded with swords in the public square; children as young as thirteen have been sentenced to more than one thousand lashes.

In Alberta, the Legislature is led by Alison Redford, a Canadian lawyer and a member of Canada’s Queen’s Bench.

Redford does have a few thoughts about her famous and long-lost cousin. Recently, in an interview with the Calgary Herald, she indicated she doesn’t think highly of her namesake or others in Hollywood are knowledgeable on energy issues.

“It’s fine for people who aren’t really impacted by this stuff to talk about why it shouldn’t happen, but these aren’t the people that are out talking to the thousand guys that want jobs — or to returning veterans who want to be able to work on pipeline construction or get trained in new technologies,” Redford said.

Actors like Robert Redford and other activists for the Green movement like actress Daryl Hannah live in a cocoon and don’t see the world as it is and, more importantly, are blind to the contradictions.

In 2006, actor Redford wrote an article for CNN, urging the United States to “kick the oil habit.”

Not long afterward, Redford lent his voice to TV ads for United Airlines. That’s amazing when you consider that in 2011 United Airlines spent about $13 billion on jet fuel and that, according to scientists, aviation accounts for 2 percent of the carbon dioxide released into the atmosphere each day.

United Airlines may “fly the friendly skies,” but the airline needs a lot of oil to do it. My guess is that, in the long run, those planes will keep flying on Canadian oil.

Over the short term, I would not be surprised to see Obama block the Keystone Pipeline. He is a kindred spirit to celebrities who object to Canadian crude but are strangely silent regarding Islamic sins.
Posted by Diane Sori at 11:12 AM