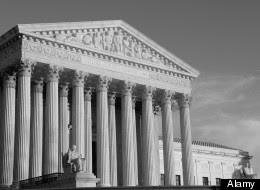 WASHINGTON -- A majority of the Supreme Court on Wednesday morning appeared sympathetic to Arizona's argument that the most controversial elements of its immigration law offer a legitimate helping hand to federal immigration policy, rather than act as unconstitutional agents of chaos.

The politically charged clash between Arizona and the United States was the final oral argument of the court's extraordinarily high-profile term and served as a rematch between D.C. superlawyer Paul Clement and U.S. Solicitor General Donald Verrilli, who faced off in the health care cases over the course of three days in late March.

Clement, arguing on behalf of Arizona and its governor, Jan Brewer, told the justices that the state's law, commonly known as S.B. 1070, "borrowed the federal standard as its own" in combating Arizona's "disproportionate share of the costs of illegal immigration."

Of the four provisions in S.B. 1070 that have been blocked by the U.S. Court of Appeals for the 9th Circuit, two criminalize undocumented immigrants' presence in Arizona and their seeking work with employers in the state. Another authorizes police officers to make warrantless arrests of anyone reasonably suspected to be in the country illegally. And the fourth is the "papers please" measure, which requires law enforcement to demand immigration papers from anyone stopped, detained or arrested in the state.

The court's three participating liberal members were Clement's most aggressive questioners, but far from broadly protesting S.B. 1070, they focused narrowly on the prospect that U.S. citizens could be detained under the "papers please" provision for unconstitutionally unreasonable lengths of time.

"As I understand it, when individuals are arrested and held for other crimes, often there's an immigration check that most states do without this law," said Justice Sonia Sotomayor. "What I see as critical is the issue of how long," she said, questioning the length of a time the person would be held while Arizona law enforcement checked his or her status with the federal government.

Justice Stephen Breyer and Justice Samuel Alito, a member of the court's conservative bloc, also seemed troubled by this consideration.

Still, there was no major assault on S.B. 1070 coming from the high court.

On the other side, Justice Antonin Scalia took the most extreme view in favor of the law, sarcastically characterizing the federal government's argument as "the state has no power to close its borders to people who have no right to be there."

The conservative justices saved much of their skepticism for Solicitor General Verrilli's assertions that federal law preempted four provisions of the Grand Canyon State's effort at "attrition through enforcement." Justice Anthony Kennedy, the high court's swing vote, noted Arizona's "massive emergency with social disruption, economic disruption, residents leaving the state because of the flood of immigrants."

"Does that give the state of Arizona any powers or authority or legitimate concerns that any other state wouldn't have," Kennedy asked, strongly implying his answer would be "yes."

Meanwhile, Chief Justice John Roberts argued that the "papers please" provision does no more than assist the federal government's own policy of keeping tabs on undocumented immigrants. "It is not an effort to enforce federal law," Roberts said. "It is an effort to let you know about violations of federal law."

Verrilli insisted that the law still trod on federal prerogatives, leading at least one liberal justice to question the government's position. "I'm terribly confused by your answer," Sotomayor said. "If the government says [in response to Arizona's identification of an undocumented immigrant], 'We don't want to detain the person, they have to be released for being simply an illegal alien,' what's wrong with that?"

The heated controversy over Arizona's law has been driven largely by critics' view that the law was borne of anti-Hispanic prejudice and invites racial profiling -- despite language in the law prohibiting such practices.

But Wednesday's case concerned the more technical doctrine of federal preemption of state laws, which is based on the Constitution's supremacy clause. Indeed, at the start of Verrilli's argument, Roberts announced that "no part of your argument has to do with racial or ethnic profiling."

Verrilli nevertheless slipped into this territory after Sotomayor urged him to list the reasons why the law should be preempted. He named first the "problem of harassment," citing Arizona's "2 million Latinos, of whom only 400,000 at most are there unlawfully."

"Sounds like racial profiling to me," Scalia retorted in an attempt to shut down that line of argument.

The Supreme Court seemed to take more kindly to Verrilli's argument that imprisoning undocumented immigrants under S.B. 1070's criminal sanctions for being present in Arizona or seeking work in the state would adversely affect the U.S. government's control of foreign relations. And during Clement's presentation, Roberts raised an eyebrow at Arizona's "imposing some significantly greater sanctions" on undocumented employees than those provided in the federal law, which focuses on punishing employers.

Alito, too, appeared willing to maintain the lower court's blocking of the criminal sanctions. "We are told that there are some important categories of aliens," such as those with pending asylum applications, who "cannot obtain federal registration, and yet they are people that nobody would think should be removed," Alito said.

Justice Elena Kagan has recused herself from the case, presumably because she worked on it while serving as solicitor general. Her absence leaves the possibility of a 4-4 split, which would automatically affirm the 9th Circuit's judgment without creating a nationwide precedent against similar laws passed in five other states and being seriously considered by another eight.

A 4-4 vote did not seem at all likely on Wednesday, however, as majorities of the justices leaned toward blocking the criminal sanctions while allowing the "papers please" and warrantless arrest provisions to go into effect, provided detainees are not held longer than they would be in the absence of S.B. 1070.

While that outcome would be a partial victory for Arizona and the states that have followed its lead, such a ruling would also leave those laws vulnerable to potential and currently pending challenges by civil rights groups on behalf of individuals who allege violations of equal protection and due process protections, among other constitutional injuries.

The Supreme Court is expected to decide the case, Arizona v. United States, by late June.

This story has been updated with the release of the oral argument transcript.
See Andrea Mitchell's report here:  http://www.huffingtonpost.com/2012/04/25/sb-1070-supreme-court-arizona-immigration-law_n_1451622.html?ncid=webmail1