Constitutional Affirmation Day...a day to our honor our nation’s lifeblood
By: Diane Sori

We all know that Barack Hussein Obama routinely dishonors and tramples on our Constitution...our nation’s lifeblood.  We all know his loyalties do NOT lie with America or with the documents that led to her founding.  And we all know his entire presidency is based on, ‘It’s All about Me, Me, Me’ and ‘We the People’ be damned! 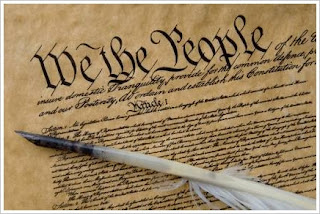 To that affect, individuals and groups have been springing up throughout our great country that realize this man is making a mockery of the very document that has made the United States of America the greatest and freest nation the world has ever known.

These dedicated patriots want to bring the Constitution back to life for ‘We the People’; to take it out of mothballs so to speak, to breathe life into it again, all because Barack Hussein Obama, and those who blindly follow him, have so perverted its words that our Constitution is hurting, with her words becoming meaningless to some and a laughing stock to others.

With June 21, 1788 being the day our Constitution was officially ratified, many of these groups and individuals are striving to declare this June 21st, and every June 21st thereafter, as ‘Constitutional Affirmation Day,’ a day set aside to honor and affirm our allegiance to the very document that has made America truly ‘the land of the free and the home of the brave.’

One group in particular, ‘The Affirmation of the United States of America’ https://www.facebook.com/groups/ADUSA/files/ is working hard in its quest to hold those in government accountable to the letter of the law...our Constitution.  They recognize that because Barack Hussein Obama has so deviated from this document that it, and our country, are starting to become unrecognizable to ‘We the People’ as he tries to make the Constitution fit his wants and needs instead of working within the very bounds set down within our Founder’s words.

With the most important election in our nation’s history fast approaching, it becomes all the more critical that people from across America join hands together and demand that our leaders recognize that the document we were founded upon is the document we must be governed by.  Our Constitution has served us well for over 224 years and will continue to serve us well if we do NOT allow those who we elect to represent us to bastardize and change the intentions of that document as laid down by our Founders.
Posted by Diane Sori at 2:18 PM