The should be non-issue of likability
By: Diane Sori 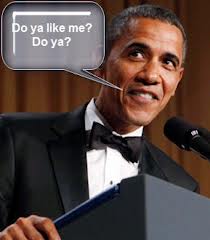 Likability...suddenly the kumbaya, touchy-feely emotion of likability becomes a factor in this presidential race.  Likability...when you have nothing else to run on.  Likability...Obama’s campaign fodder.  Likability...what a joke.
Sadly, 54% of Americans, the majority of which are the sheeple and apathetic, believe Obama is more likable, compared with 31% for Mitt Romney.  Who cares who’s more likable...I and others with even one working brain cell care who’s better able to lead the country!
While Obama’s campaign pushes likability over the true issues, Mitt Romney continues to run his campaign based on his ability to handle, jump start, and turn around the economy, which, by the way, is really what it’s all about.  And with only about 70 days until the election a new Mitt Romney is emerging...stronger, more focused than ever, and ready to take on anything Barack Hussein Obama throws at him...likability be damned.  Romney’s more aggressive posture, coupled with his choice of Paul Ryan as his vice-presidential running mate, has boosted him in popularity, as witnessed by the newest numbers out of Ohio which say he is now tied with Obama in the polls.
Romney’s attacks on Obama as a divisive leader, echoing a message Ryan has been honing for months, are also cutting into Obama’s likability numbers, and show that Romney is ready, willing, and able to drill home the message that the economy is the paramount issue of this election, helping to push aside the likability issue.  And after weeks and weeks of vicious personal attacks and outright lies about his character and record, Mitt Romney continues to press ahead on target but with a harder cutting edge to add to his already impressive business and job-creation credentials.
And the bottom line, with so-called likability thrown out the window, is that Barack Hussein Obama has miserably failed the country...’Hope and Change’ don’t work, as Obama’s policies are not only harmful to the middle class but have created an entire group of Americans who willingly living off government handouts and freebies...Americans who have lost not only the incentive to better themselves, but who have also lost the basic human desire to do so.  Obama’s economic policies make it easier for them to avoid the work and job training requirements called for when becoming a welfare beneficiary, while still allowing them to get the checks and other free goodies they believe they are entitled to.
And why should they work and get off welfare as Obama will cater to all their whims and wants in exchange for their votes while the rest of us bust our butts to have the honor of being the ones who actually are paying for all this.  How sad our country has become under Obama’s stewardship.
But he’s still likable or so says the media...oh, happy day.
Yeah, Obama’s likable all right...Congressman Allen West (R-FL) says it best when he speaks of Obama’s likability saying, “it’s like feeding America a crap sandwich with a smile and that it’s very important for us to win the images war in the presidential race. Because a crap sandwich with a smile is still a crap sandwich!”
Couldn’t have said it better myself, no matter how hard I tried.
So while Obama continues using gutter level Chicago tactics to strong arm his likability factor, Mitt Romney stays on task of running his campaign based on his vision for our country...a positive vision to grow our economy, create jobs, and strengthen the middle class...a vision of pro-growth, pro-business and pro-American exceptionalism...a vision so diametrically opposed to that of Barack Hussein Obama.
But hey...Obama’s likable or so he says.
Hurry up November 6th so 'We the People' can show show you just how likable you are NOT!
Posted by Diane Sori at 12:21 AM