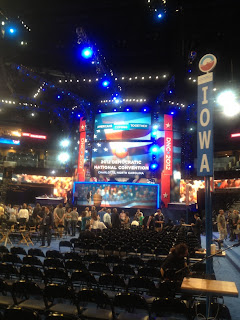 The wait is finally over as the official start of the Democratic National Circus...ummm...I mean Convention, in Charlotte, North Carolina, is upon us.

All the players are in place...or are they.  Uncle Joe ‘Bite-Me’ Biden is on his way and I can’t wait to see what guffaw he’ll make this week.  ’Prince’ Harry Reid will be there doing nothing just like he does nothing in the Senate.  ‘Botox’ Nancy Pelosi, fresh from another face touch-up, will be there repeating her mantra, ‘we needed to pass the bill before we could see what was in it.’  The infamous DNC Chair, Congresswomen ‘Debbie-Downer’ Wasserman Schultz will be there parroting the party line as she squawks the Obama rhetoric with her annoying nails on a chalkboard voice.

Secretary of State Hillary Clinton will be there...oh wait...Hillary has chosen NOT to be there for the freak show as she is trying to put as much distance between herself and Barack Hussein Obama as possible. While I have NO love for Hillary I do give her credit for staying away from this lie-fest, because if she is considering a 2016 run she needs to cut all ties to our current traitor-in-chief.

Yeah, yeah...I know Secretary of States usually do NOT attend these conventions but you forget Hillary is a glory hog who relishes and basks in all the publicity and camera time she can get, and who hasn’t missed a DNC convention with its heralded camera time since 1968.  And together with hubby Billy-Boy, you have the King and Queen of the photo-op.  Yet this convention she has chosen to pass up as even she knows NOT to go down with a sinking ship.

And down the Obama ship is going as Mr. Hope and Change’s campaign is desperately passing out free tickets to students and volunteers in a last ditch attempt to fill the many, many empty seats that must be filled for Obama’s Thursday night accepting the nomination speech.

What a far cry from four years ago when the excitement of the DNC Convention could be felt even by those of us on the other side of the political spectrum, as it pulsed with a hope for a new tomorrow.  With Barack Hussein Obama being billed as the ‘messiah of the people’ and as he descended through Corinthian columns to accept his party’s nomination, you knew the anointing of our savior by the media was complete.

What have we gotten from Obama...we have a middle class that’s been financially crushed under his administration.  We have gas prices that have doubled, we have a stalled housing market, we have incomes that have dropped, and we have poverty levels that are reaching fifty-year highs.   We have unemployment levels that have been above 8% for 42 straight months.

And we still have Barack Hussein Obama blaming George W. Bush for all his woes.

And yet, Obama wants you to believe you are better off now than you were four years ago, ignoring the fact that this is just NOT so.  And while he will try and trumpet his so-called success on the jobs front, he wants us to forget that the jobs he’s actually created are nothing but 150,000 new unionized government jobs, included thousands of new workers to manage ObamaCare at the IRS and the Department of Health and Human Services.

What an out and out insult to the unemployed in this country when the jobs created are just more bureaucratic mumbo-jumbo while ‘We the People’ continue to suffer under the stewardship of a man ill-equipped to handle the job of president of the United States.

So sit back, enjoy this week’s DNC circus for the laugh it is (remember, the ultimate political whore Sandra Fluke is a featured speaker), and like always, November 6th can’t come soon enough.
Posted by Diane Sori at 12:09 AM