Documents show assignment ran through at least spring of 2012 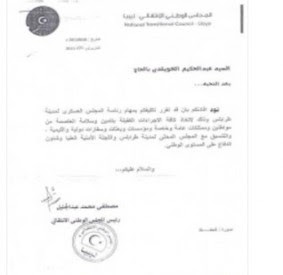 A secret document that has been obtained by former terrorist turned peace advocate Walid Shoebat suggests the Obama administration apparently approved assigning a member of al-Qaida to handle security at the U.S. Embassy in Tripoli.
According to a report published today by Shoebat, the confirmation comes from a letter dated Aug. 30, 2011, that informs the al-Qaida member that he now has responsibility for security in Tripoli, “to include all international embassies.”

The letter was to Abdel Hakim al-Khowailidi Belhaj and it was signed by Mustafa Muhammad Abdul Jalil on behalf of the National Transitional Council, with which the U.S. was working at the time after Moammar Gadhafi fell from power in Libya.

Belhaj previously has been described by al-Qaida kingpin Ayman al-Zawahiri as “the amir of the mujahideen, the patient and steadfast [Belhaj].”

Shoebat, who was joined by Ben Barrack in the investigation of the document, said the letter was from “a treasure trove of secret documents” that was obtained by a Libyan source.

“It shows that in supporting the removal of Gadhafi, the Obama administration seemed to sign on to an arrangement that left forces loyal to al-Qaida in charge of security at the U.S. embassy in Tripoli from 2011 through at least the spring of 2012,” they wrote.

Shoebat’s translation of the letter reveals it said, “We would like to inform you that you have been commissioned to the duties and responsibilities of the military committee of the city of Tripoli. These include taking all necessary procedures to secure the safety of the Capital and its citizens, its public and private property, and institutions, to include all international embassies. To coordinate with the local community of the city of Tripoli and the security assembly and defense on a national level.”

Shoebat explained that al-Zawahiri’s endorsement of Belhaj came in a 2007 interview that was replayed by ABC.

The report also said that Belhaj had been identified as “a Libyan rebel and a moderate person who commands wide respect,” but Shoebat noted the source of that statement was “a leader with the Libyan Muslim Brotherhood” – Ali Sulaiman Aujali.

Aujali appeared at a convention for the Islamic Society of North America, considered by many to be a front group for the Muslim Brotherhood in America, just a few weeks before vouching for Belhaj, Shoebat reported.

And the Libyan ambassador to the U.S. reported at one point that “[Belhaj] should be accept[ed] for the person that he is today and we should deal with him on that basis.”

The Benghazi controversy has been developing since Sept. 11 when on the anniversary of the 9/11 attacks Ambassador Chris Stevens and three other Americans were killed in an organized terror attack there.

While evidence now reveals that the White House knew almost immediately that terror was suspected, for weeks after officials were blaming the deaths on Muslims being upset over a trailer of an online movie that purportedly criticized Muhammad.

After serving as a member of the Palestinian Liberation Organization and participating in acts of terror against Israel, Shoebat studied the Tanach, the Jewish Bible, in a challenge to convert his wife to Islam.

He reports himself, six month later, he realized “that everything he had been taught about Jews was a lie.”

He said he was convinced he had been on the side of evil, so became an advocate for his former enemy.
Posted by Diane Sori at 10:18 PM