Op-ed:
Jerusalem as the capital of Palestine...I don't think so
By: Diane Sori 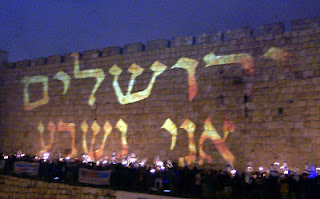 Last week's U(seless) N(ations) vote to award the elevated status of 'non-member observer' to the so-called 'Palestinians' has fueled the fire for Israel's destruction by radical islamists the world over.

In fact, after the vote Mahmoud Abbas vowed that the Palestinian Authority flag would fly over 'Jerusalem, eternal capital of the state of Palestine.' A flag flying over a supposed country that doesn't exist, over a city they have NO right too, given to a people who never were and NEVER will be, and all because the U(seless) N(ations) says so.

Add into the mix Obama's funneling of massive amounts of foreign aid (our taxpayer dollars) to the enemies of our stalwart friend and ally, and you have one hell of a knife in the back that sinks in deeper and deeper into the heart of Israel...Jerusalem.

Can you see the real motive behind this vote...I sure can.

And now our ever-lovin' Hillary continues to bloviate that Israel missed opportunities for peace and lacks empathy in ‘understanding the pain of an oppressed people.’

How about the pain of the Israelis who live daily under the danger of Islamic lunatics trying to wipe them off the face of the Earth...guess she forgot that one. And anti-Semitic, muslim loving Hillary also continues to accuse Israel of setting back the chances for peace by continuing to approve construction permits in what she says is the nation’s 'disputed' capital of Jerusalem.

Sorry but there's NOTHING 'disputed' here...Jerusalem is the capital of the Jewish homeland of Israel, period.

And herein lies the crux of all the muslim lies, for Jerusalem is NOT mentioned even once in the qur'an NO matter how the muslims try to twist that fact. The muslims base their entire premise that Jerusalem is a muslim city from this one verse, qur'an 17:1, “Glory to (Allah) Who did take His servant for a Journey by night from the Sacred Mosque to the farthest Mosque, whose precincts We did bless,- in order that We might show him some of Our Signs: for He is the One Who heareth and seeth (all things).” And while islamic tradition tries to claim that 'the farthest mosque' (al-aqsa) is the city of Jerusalem, there is no mention of Jerusalem by name in that verse or in any other qur'anic verses, period.

Therefore, muslims have NO claim to Jerusalem...NO rightly claim at all NO matter what the U(seless) N(ations) decrees or Obama and Hillary push for.

However, Jewish claims to the Holy Land of Israel, and hence it's capital of Jerusalem, rests directly in passages from the Torah in fulfillment of God's promise to them. In Genesis, God promises the Holy Land to Abraham and his descendants. God says: "For all the land which you see, to you will I give it, and to your seed for ever" (Genesis 13:15). This promise is repeated to Abraham's son Isaac: "To you and your descendants I will give all these lands and will confirm the oath which I swore to your father Abraham" (Genesis 26:3).

In 1,000 BC, King David conquered the city from the Jebusites and Jewish sovereignty in the holy city was established with Jerusalem being the focus and spiritual center of the Jewish people. And while Jerusalem has not always been under Jewish control due to it's many conquerors, Jerusalem's centrality to the Jewish religion has NEVER changed for in Jerusalem is where the Holy Temple was built, and Jerusalem is mentioned in the Hebrew Bible 669 times.

Case closed...Jerusalem is the capital of Israel...always has been and always will be the capital of the Jewish people in their Jewish homeland, and the muslims be damned. Oh, and by the way Hillary...Israel can build whatever they want in the own capital of their own sovereign country. And the muslims, the so-called Palestinians, who are NOTHING but run-of-the-mill Arabs, can go home to Jordan or to any other of their fellow Arab countries that will take them.

And despite mounting international pressure led by Obama and Hillary for a divided Jerusalem now that the U(seless) N(ations) has said the so-called Palestinians have a homeland, Israeli Prime Minister Netanyahu issued a strong statement saying Jerusalem would "continue to stand up for its vital interests even in the face of international pressure."

And that is something Barack HUSSEIN Obama and Hillary Clinton can take to the bank, for Benjamin Netanyahu's words concerning Jerusalem will NEVER waver NO matter what pressures are put upon him...nor should they ever have to.
Posted by Diane Sori at 12:09 AM