I periodically share public opinion data, either because I’m encouraged by the results or because I think that the research helps show how to frame issues.

But I’ve been very narrowly focused. Just about all the polls I’ve shared have been about some aspect of fiscal policy.

So I was very interested to see a new poll about issues related to the Second Amendment, and I was particularly gratified to see that an overwhelming majority of gun owners would not surrender their constitutional rights if the jackals in Washington approved a gun ban.

For more information, here’s part of a Washington Times report on the new polling data.

These results don’t tell us why people would defy the government, but the poll I conducted suggests that a plurality of Americans support the Second Amendment because they want the ability to resist tyranny.
I’m also happy to see that most Americans understand that gun bans are a very ineffective way of fighting crime. Heck, they realize that we need more guns in the hands of law-abiding people.

In other words, ordinary Americans have a lot more common sense than the buffoons in the media. They know that you get less crime when you increase the expected cost of criminal behavior.

P.S. If you want to enjoy some good gun control cartoons, click here, here, and here.

The welfare state creates some amazingly pathetic and disgusting individuals.

But I’ve never found a match for Olga, a Greek woman who thinks it is government’s job to take care of her from cradle to grave.

At least not until now. I’m excited to announce that Olga has a soulmate named Natalija. She’s from Lithuania, but she now lives in England, and she doubtlessly will inspire Olga on how to live off the state. 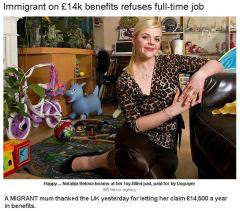 Here’s some of what The Sun reported about this very successful moocher.


Natalija Belova, 33, told The Sun how she spurns full-time work — yet can afford foreign holidays and buys designer clothes. The Lithuanian said: “British benefits give me and my daughter a good life.” She has milked soft-touch Britain for £50,000 in benefits and yesterday said: “I simply take what is given to me.”

And what is given to her? Quite a lot.


The graduate, who became a single mum after she arrived here, rakes in more than £1,000 a month in handouts — £14,508 a year — to fund her love of designer clothes, jaunts to the Spanish sun and nightclubbing. She bragged: “I have a lovely, fully-furnished flat and money to live properly on. …Her handouts total £279 a week — with housing benefit contributing £183, child tax credit adding £56, child benefit £20 and her council tax being paid to the tune of £20. 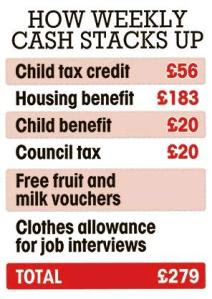 You might expect Natalija to be grateful, but you’d be wrong.


But she does have one criticism. Natalija moaned: “I think they should help pay for private nannies, rather than just free nursery.” …Natalija vowed: “I am not going to work like a dog on minimum wage.” She added: “I don’t care what anyone thinks. I’m not doing anything wrong. “I know people won’t like to read this, but what would they do? “Would they not take the money that was being handed to them to stay with their child all day?”


Speaking at her two-bedroom pad that came fully furnished in Watford, Herts, courtesy of the taxpayer, grateful Natalija said: “In Lithuania the benefits system does not pay enough. “I have a friend over there who is a single mother. “She only gets £20 a month in child benefit, plus some discounted help with gas and electricity — and some housing help. “It’s not enough to keep a normal level of life, like here. “If I was on benefits there, I couldn’t afford nice clothes or the holidays abroad.” She went on: “I am sure people will say I should return to Lithuania. But that won’t be happening. Being in Britain offers me far better benefits.”

We also have a remarkable example of labor supply economics. This is the real-world example of these charts showing how the British welfare state destroys incentives.


She is careful to work fewer than 16 hours a week so that the benefits keep rolling in. But her wages boost her income to more than £400 a week. On top of that she gets free childcare, fruit and milk vouchers — and even a clothes allowance for “job interviews”. Natalija said: “It is a strange system in this country. Basically, the fewer hours I work, the more I can earn on benefits. But that’s the way it is and it is not my fault.” …She insisted she would be prepared to get a full-time job — but only if the salary tops £25,000. …”Some people may think I am picky. But I am a realist. I need a full-time job that pays at least £25,000 — that is just enough to cover all my living costs that benefits currently pay for. “Otherwise working full time is not worth my while. “If I worked full time, I’d have to pay for childcare costs as well as rent and all my bills. “The benefits system in this country means that I do not have to do this.”

By the way, here’s a chart showing the same destructive policies in the United States.

Let’s look at one last excerpt about Natalija. British taxpayers can take comfort in the fact that this human tick is living a nice life.


In September she escaped the dreary British summer by jetting off with her daughter for a sun-kissed week in Spain. Last month she enjoyed a second holiday — back in her Lithuanian homeland. Natalija, who has three credit cards and loves to go on sprees at designer clothes stores, crowed: “After our holiday to Malaga, we went to Lithuania over Christmas and spent £1,000.” She continued: “I love to buy clothes on my credit cards and often have a blow-out at stores like Roberto Cavalli and the Armani Exchange. …”I also enjoy going to nightclubs and parties with my friends. It’s important to go out and get dressed up. It’s good for my self-esteem.”

Her self esteem has been boosted? Oh, joy!

And I can just imagine how much self esteem her daughter will have after growing up with a moocher for a mother.

John Hinderaker of Powerline was first on this horrific story and his analysis is very much worth reading as well. But since imitation is the sincerest form of flattery, I figured I would share the story and add some of my thoughts.

By the way, if you want more than just horrifying anecdotes, click here for a video that looks at the dismal impact of the American welfare state and click here to see how Obama has exacerbated the negative effects of such policies in America.
Posted by Diane Sori at 10:24 AM