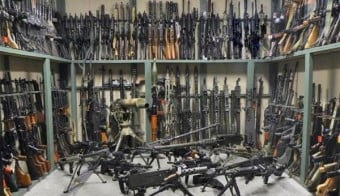 A study by the Department of Justice’s research wing, the National Institute of Justice, has the feds admitting that so-called “assault weapons” are not a major contributor to gun crime.

The study also concluded those weapons are not a major factor in deaths caused by firearms, nor would an “assault weapons” ban be effective.

The report finds no significant link between “assault weapons” and murders.

“Since assault weapons are not a major contributor to U.S. gun homicides and the existing stock of guns is large, an assault weapon ban is unlikely to have an impact on gun violence,” the report said.

“Fatalities from mass shootings (those with 4 or more victims in a particular place and time) account on average for 35 fatalities per year,” the report said.

“Policies that address the larger firearm homicide issue will have a far greater impact even if they do not address the particular issues of mass shootings,” the report said.

The study also found a number of reasons why gun buybacks are ineffective as generally implemented: “1. The buybacks are too small to have an impact. 2. The guns turned in are at low risk of ever being used in a crime. 3. Replacement guns are easily acquired. Unless these three points are overcome, a gun buyback cannot be effective.”

The report, by Greg Ridgeway, deputy director, said restricting large capacity magazines has a “great potential to reduce lethality,” but that would require a massive reduction in the supply.

“In order to have an impact, large capacity magazine regulation needs to sharply curtail their availability to include restrictions on importation, manufacture, sale, and possession. An exemption for previously owned magazines would nearly eliminate any impact. The program would need to be coupled with an extensive buyback of existing large capacity magazines. With an exemption the impact of the restrictions would only be felt when the magazines degrade or when they no longer are compatible with guns in circulation. This would take decades to realize.”

See the video on the report below:
http://www.wnd.com/2013/02/feds-admit-gun-laws-wont-slow-crime/

The report undermines most of the talking points by the Obama administration in its pursuit of more limits on guns, ammunition and accessories.

The administration’s campaign was launched following the Newtown, Conn., massacre that killed 20 students and six adults.

The report noted that a 2000 study by the Bureau of Alcohol, Tobacco and Firearms revealed that 47 percent of crime guns are obtained through a straw purchase, and another 26 percent are stolen.

“These figures indicate informal transfers dominate the crime gun market. A perfect universal background check system can address the gun shows and might deter many unregulated private sellers. However this does not address the largest sources (straw purchase and theft), which would most likely become larger if background checks at gun shows and private sellers were addressed.”