Moderate Democrats are quitting on Obamacare


By Scott Clement / From The Washington Post’s The Fix:


The landmark health-reform law passed in 2010 has never been very popular and always highly partisan, but a new Washington Post-ABC News poll finds that a group of once loyal Democrats has been steadily turning against Obamacare: Democrats who are ideologically moderate  or conservative.

Just after the law was passed in 2010, fully 74 percent of moderate and conservative Democrats supported the federal law making changes to the health-care system. But just 46 percent express support in the new poll, down 11 points in the past year. Liberal Democrats, by contrast, have continued to support the law at very high levels – 78 percent in the latest survey. Among the public at large, 42 percent support and 49 percent oppose the law, retreating from an even split at 47 percent apiece last July. 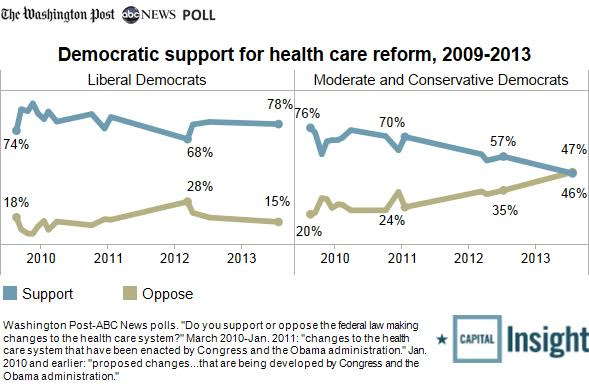 The shift among the Democratic party’s large swath in the ideological middle– most Democrats in this poll, 57 percent, identify as moderate or conservative – is driving an overall drop in party support for the legislation: Just 58 percent of Democrats now support the law, down from 68 percent last year and the lowest since the law was enacted in 2010. This broader drop mirrors tracking surveys by the non-partisan Kaiser Family Foundation and Fox News polls, both of which found Democratic support falling earlier this year.

This news comes on the heels of a significant fissure among House Democrats over Obamacare.

It also deflates an already weak talking point Obamacare supporters have used to pooh-pooh the law’s persistent unpopularity. As Henry Aaron of the Brookings Institution once put it:

They can’t use that excuse here. If Democratic support for Obamacare fell because more Democrats suddenly wish the law went farther, that drop would occur first and primarily among left-wing Democrats, not moderates and conservatives. It’s hard to come up with a story that explains why that dynamic would cause a drop in support only among moderates and conservatives.
Posted by Diane Sori at 7:49 AM