Just How Distorted is the U.S. Unemployment Rate Number?

On the first Friday of every month, I go through the jobs report and note the grossly distorted statistics.

Every month I conclude with a couple paragraphs like these:

Were it not for people dropping out of the labor force, the unemployment rate would be over 9%. In addition, there are 7,911,000 people who are working part-time but want full-time work.

Digging under the surface, much of the drop in the unemployment rate over the past two years is nothing but a statistical mirage coupled with a massive increase in part-time jobs starting in October 2012 as a result of Obamacare legislation.

This past month I had a couple of extra paragraphs:

Compared to recent Gallup surveys, these BLS stats regarding the base unemployment rate and the alternative measures as well are straight from wonderland. For details, please see Gallup Says Seasonally-Adjusted Unemployment Climbs to 8.6%; Who to Believe (Gallup or the BLS)?

Let's take a look at BLS data to get a handle on what is happening, and why. 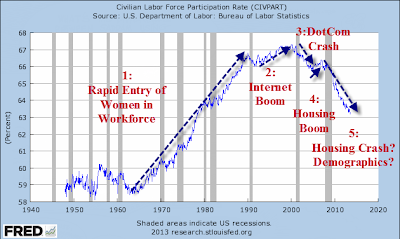 The participation rate is the "labor force as a percent of the civilian noninstitutional population."

Many people believe demographics explains the decline in the workforce. However, that's not the case.

To prove the point, let's focus in on an age group that is generally not retired and historically not in school. 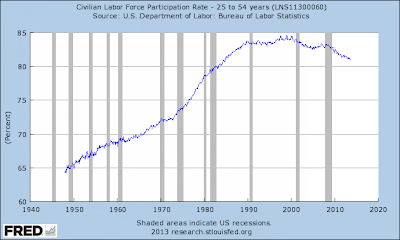 Notice how the participation rate of those 25 to 54 has been in steady decline since
the year 2000 except for a slight uptick in the housing boom years.

Allowing 6-7 years after high school for college education, most of those 25 should be looking for a job or have a job. Yet the trend is unmistakable. 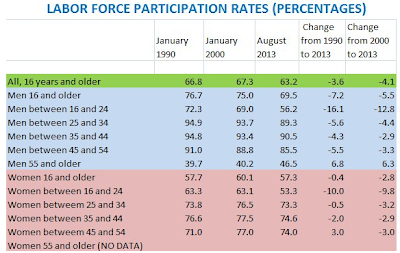 Here is a chart I posted previously in Normalized Unemployment Rates; Cyclical vs. Secular Forces 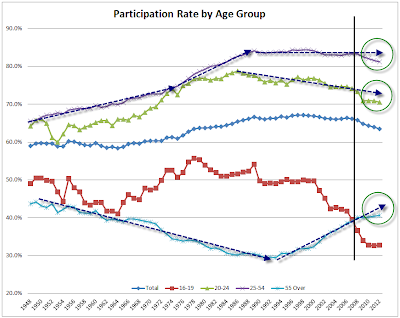 Not in Labor Force Want a Job 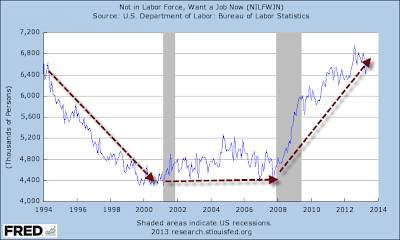 But why stop there?

It's All In The Definition

The definition of "unemployed" is what it is (for political reasons), but by my more practical definition "you are unemployed if you want a job and do not have one", the corresponding numbers would be as follows:

We can arrive at similar conclusions by looking at the number of employed. Once again the age group 25-54 is the most logical to study. (Total employment is not the best measure because of demographics, those over 60 retiring voluntarily).

Employment Rate: Aged 25-54: All Persons in the United States 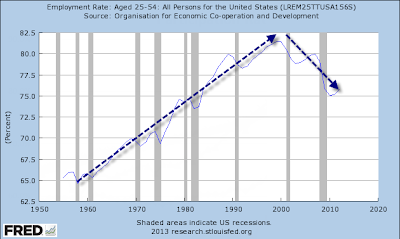 Demographics sure does not explain that chart so something else must. The answer is threefold:

I have talked about disability fraud on numerous occasions. Here are a few examples:

Please read that last link above. It's a real eye opener.

Not in Labor Force With a Disability 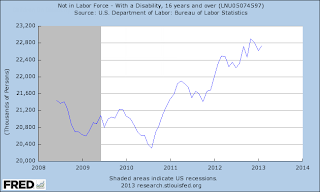 I would love to show data pre-recession. Unfortunately, the data only goes back to mid-2008. We can see however, that nearly 23 million Americans are not in the labor force because of "disabilities".

It Doesn't Pay to Work

The second reason the unemployment rate is artificially low is "It Doesn't Pay to Work".

I hardly think hiding out in school because there are no jobs (when you really want a job) should constitute someone being "not in the labor force" (yet it does).

So What's the Real Unemployment Rate?

If you use my definition, "you are unemployed if you want a job and do not have one" then the starting point is 10.9%.

But what about those who do not have a job and don't want a job because of disability fraud or welfare considerations?

Factor that in and the unemployment rate would be several points higher, say 14-15%.

However, that does not count another 7% who have a part-time job but want a full-time job.

So if you watch the unemployment rate drop month after month, and you think the number is grossly distorted and totally void of common-sense reality, you are absolutely correct.
Posted by Diane Sori at 7:19 AM