If You Want Jobs and Growth, Keep in Mind that Obamanomics also Doesn’t Work on the State Level

The Tax Foundation in Washington does some great work on fiscal issues, but I also admire their use of maps when they want to show how various states perform on key indicators.

They’re best known for “Tax Freedom Day,” which measures how long people have to work each year before they’ve earned enough to satisfy the tax demands of federal, state, and local government. Andthey have a map so you can easily see how your state ranks.

But my favorite map from the Tax Foundation is the one showing that the geese with the golden eggs are moving from high-tax states to low-tax states. That’s tax competition in action!

So it should go without saying that I’m going to share their new State Business Tax Climate Index. And the accompanying map. 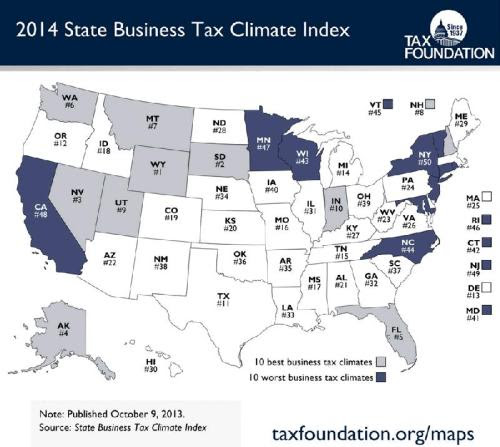 What are some important takeaways from this ranking? Five things caught my eye.

1. It’s a very good idea for a state to not impose an income tax. The top six states all avoid this punitive levy and every no-income tax state is in the top 15. And you won’t be surprised to learn that these states grow faster and create more jobs.

2. It’s just a matter of time before states such as New York and Californiaare beset by fiscal crisis. When a jurisdiction has something special – like California’s climate or the appeal (to some) of New York City – it can get away with imposing higher tax burdens. But there’s a limit, and migration patterns show that productive people are voting with their feet.

3. Scott Walker and Chris Christie often are mentioned as serious 2016 presidential candidates, and both have become well known for trying to deal with the problem of over-compensated state bureaucrats. But they both preside over states in the bottom 10 of this ranking, and presumably should address this problem if they want to demonstrate that they’re on the side of taxpayers.

4. It’s possible for a state to make a dramatic jump. North Carolina currently is one of the bottom 10, but that will soon change because of reforms – including a flat tax – that were enacted this year. As the Tax Foundation noted: “While the state remains ranked 44th for this edition, it will move to as high as 17th as these reforms take effect in coming years.”

5. States also can move dramatically in the wrong direction. Connecticut is now one of America’s least-competitive states, in large part becausepoliticians managed to push through a state income tax in the early 1990s.

P.S. If you like maps, here are some interesting ones, starting with some international comparisons.
Here are some good state maps with useful information.
There’s even a local map.