I’ll say this about President Barack Obama: He’s a giver. After all, without the daily disco of dishonest disgrace that his Administration has delivered in unprecedented amounts, we wouldn’t enjoy the new level of partisan rancor with which the Democrats have replaced any hope of responsible and responsive government. And let us all thank Representative Alan Grayson (D-Fla.) for the latest reminder that there are no depths so low that liberals haven’t plumbed, roughed-in and constructed Section 8 housing in them. Grayson is no stranger to the political septic system. Indeed, he’s well-known for his bouts of verbal diarrhea, notably claiming conservatives want Americans to “die quickly.” Of course, we know that was actually former Surgeon General Joycelyn Elders’ “plan.” Grayson also infamously referred to a senior aide to Federal Reserve Chairman Ben Bernanke as a “whore,” but he may have been cribbing Democrat talking points about any woman with whom they disagree. 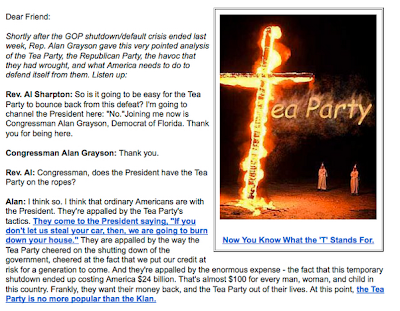 While Grayson’s basic message, which I’m guessing aims to equate the Tea Party with the Ku Klux Klan, is pretty much par for the liberals’ kicky new rhetorical course, it wildly misses the mark for historical accuracy. The last time the KKK held any real relevance, they served as the punch line to a running gag in “The Blues Brothers.” The only exception to that might be the distinguished career of former Senate Majority Leader Robert Byrd, a longtime Democratic power-player who donned his first hoodie decades before Trayvon Martin made them cool.

But this sort of inane ranting isn’t new to the Democrats; slander has been their M.O. for decades. However, the real tinfoil-hat brigadiers have generally been kept at arm’s length from such Democrats’ inner sancta as Malibu, Chappaqua and Hyannis Port. Either they’ve been shunted off to mid-level staff positions in places like the California Bureau of Snail Darter Habitat Enforcement, settled into digs at lapdog media asylums like MSNBC or — if they’re really off the deep end — the office of the Vice President of the United States.

Unfortunately, the advent of the Teflon Presidency in the person of Obama has unchained the snarling mutts of the far left; and now they have infested the highest halls of power in the land. Hence, the hypocritical ramblings of the global warmists, America-lasters and outright socialist sociopaths of the far left, which moved from the barely-audible squeak of President Jimmy Carter to the muffled giggling of President Bill Clinton, are now the full-throated roar of the Obama-era Democrats. Grayson’s repulsively mendacious shrieking used to be the stuff of Bill Ayers’ bomb threats and Louis Farrakhan’s tirades. Now, they’re Congressional fundraising pitches.

Imagine the sort of people who respond in the affirmative to Grayson’s craven intellectual thuggery.

Imagine them voting. And imagine the sort of people for whom they vote. Imagine the sort of party that proudly digests them all. No wonder Grayson sits in Congress, instead of somewhere more fitting, like a cardboard box under a freeway overpass or the lovely Section 8 housing to which so many Democratic voters are consigned. And no wonder America faces its darkest days in decades.
Posted by Diane Sori at 9:35 AM