First things first. Yes, the president's overall job approval rating is five percentage points higher today than 43's was at this point in his presidency, but that's not something to write home about.

Look at this chart: 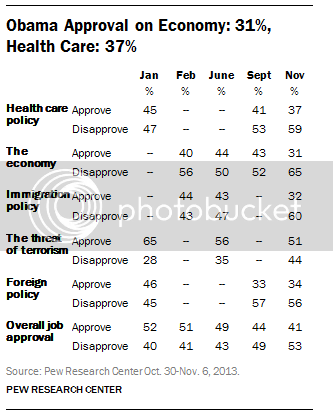 In every single category -- health care policy, the economy, immigration policy, the threat of terrorism, foreign policy, and overall job approval -- his ratings have plummeted this year. Indeed, I half-expected his health care policy approval ratings to drop precipitously since last month, too -- you know, given everything that’s happened with the Obamacare website rollout. Nope. He’s only down four percentage points since then, which isn’t terribly impressive but hardly as low as it probably could or should be.* Most significantly, his approval ratings vis-à-vis the economy have nose-dived -- 12 percentage points (!) -- in the past month, while at the same time his disapproval ratings have soared.
Have we crossed the Rubicon?


Obama’s job ratings on the economy have been more negative than positive for more than four years, but the current measure is the worst of his presidency. Just 31% approve of the way Obama is handling the economy, while 65% disapprove.

Only about one-in-five independents (21%) give Obama positive marks on the economy, while 75% disapprove. About a third of Democrats (34%) disapprove of the way Obama is handling the economy (64% approve).


It seems as though independents in particular have soured on the president’s handling of the economy. Has he “pivoted” to jobs (and come up empty) too many times for middle-of-the-road voters to stomach? Pew digs deeper:


Obama’s current rating among independents is only slightly higher than Bush’s in November 2005 (29% approved). Like Bush, Obama retains broad support among members of his own party, though the share of Democrats who give him a positive jobs rating has fallen 10 points over the past year (from 88% to 78%). Obama’s job rating among Republicans, extremely low last December (12%), has changed little since then.

Ouch. Obama will always garner significant support from his base -- and Republican disapproval is fairly consistent for obvious reasons. But what could have caused independents’ growing disenchantment in recent weeks? And will these numbers rebound?

The jobs report today was surprisingly not awful, exceeding expectations. So maybe his approval ratings on the economy will rise in time.

The man sure could use some good news.

*UPDATE: I should have noted that while his approval rating on this issue only decreased slightly since September, he's lost a ton of ground on health care policy in general over the past 10 months.
Posted by Diane Sori at 6:02 PM