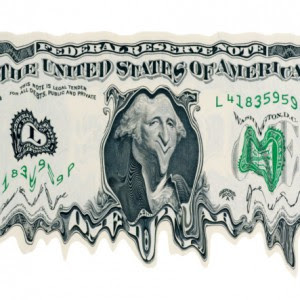 PHOTOS.COM
Since 2006, the U.S. dollar has experienced a one-quarter to one-third drop in value to the Chinese yuan, depending on the choice of base.

Now China is going to let the dollar decline further in value. China also says it is considering undermining the petrodollar by pricing oil futures on the Shanghai Futures Exchange in yuan. This, on top of the growing avoidance of the dollar to settle trade imbalances, means that the dollar’s role as reserve currency is coming to an end – which means the termination of the U.S. as financial bully and financial imperialist. This blow to the dollar, in addition to the blows delivered by jobs offshoring and the uncovered bets in the gambling casino created by financial deregulation, means that the U.S. economy as we knew it is coming to an end.

The U.S. economy is already in shambles, with bond and stock markets propped up by massive and historically unprecedented Federal Reserve money printing pouring liquidity into financial asset prices. This month at the International Monetary Fund annual conference, former Treasury Secretary Larry Summers said that to achieve full employment in the U.S. economy would require negative real interest rates. Negative real interest rates could be achieved only by eliminating cash, moving to digital money that can only be kept in banks and penalizing people for saving.

The future is developing precisely as I have been predicting.

As the dollar enters its death throes, the lawless Federal Reserve and the Wall Street criminals will increase their shorting of gold in the paper futures market, thereby driving the remnants of the West’s gold into Asian hands.

The People’s Bank of China said the country does not benefit any more from increases in its foreign-currency holdings, adding to signs policymakers will rein in dollar purchases that limit the yuan’s appreciation.