Op-ed:
Nelson Mandela…a communist revolutionary morphed by the media into a saint
By: Diane Sori 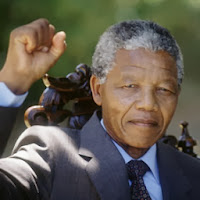 “I am one of the countless millions who drew inspirations from Nelson Mandela’s life…I cannot fully imagine my own life without the example that Nelson Mandela set. So long as I live, I will do what I can to learn from him.” - Barack HUSSEIN Obama on learning of the death of Nelson Mandela

Rick Clark, sheriff of Pickens County South Carolina, is one brave man as he is defying Obama’s executive order to fly our country’s flag at half-staff until tonight in memory of former South African President Nelson Mandela.

And how right he is.

Barack HUSSEIN Obama loves to forget the fact that flag lowering is to honor Americans who made the ultimate sacrifice for our country, for those foreigners who aided in the defense of our country, and to honor the passing of important American government figures.

Our flag should NOT have been lowered for drugged-out rock singer Whitney Houston nor should it be lowered for former South African President Nelson Mandela for the myth that surrounds the man is far greater than the man himself.

But have NO doubt that Nelson Mandela did some honorable things…paramount of which was helping to end four decades of apartheid in South Africa and leading his country into to its first multiracial democracy. But herein is where the truth diverges from the media anointed sainthood of Nelson Mandela. And it starts with his arrest. Nelson Mandela did spend 27 years in prison, coming out a changed man from the angry man who entered prison for what the media claims was for his beliefs and opposition to apartheid. But the truth is that the Soviet-backed Nelson Mandela was sent to prison for terrorism, sedition, and sabotage. 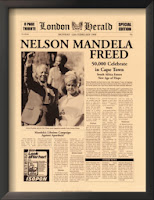 When released in 1990, Mandela claimed he bore NO ill will towards his white Afrikaner jailers. Saying he was a proponent of reconciliation between the races, he, together with E.W. de Klerk…the South African president who had him released him from prison…won the Nobel Peace Prize in 1993 for his efforts on behalf of said racial reconciliation. And just a year later in the country’s first free and peaceful elections he defeated President de Klerk to become South Africa’s first black president. And make NO mistake, under Mandela’s five-year rule as president the South African economy grew as a constitution guaranteeing racial equality and freedom of the press took hold, two very important accomplishments.

But even with this an underlying tension between blacks and whites remained and still remains to this day for it must be remembered that Mandela was indeed a leader of the African National Congress (ANC), a group as known for using violence as was those who forced apartheid…separate but NOT equal…upon the country’s black population.

The African National Congress (ANC), an organization designated a terrorist group by our beloved Ronald Reagan, who put both Mandela as an individual and the ANC as a group on the American terrorist list in the 1980s where they stayed until 2008. Mandela was also a co-founder of the ANC’s Umkhonto we Sizwe (Spear of the Nation), a heavily armed militant terrorist group within a terrorist group whose main purpose was ‘to direct and control the violence of the people.’ 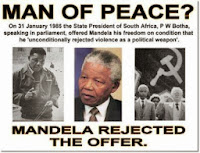 Nelson Mandela is also believed…and there is much evidence…to have been a lifelong secret member of the of the African National Congress/South African Communist Party (ANC/SACP) alliance…a hardcore Marxist-Leninist group where members pledge undying obedience and loyalty to the Party and thus do their bidding, of which it’s believed that group members, including Mandela, under the radar took control of the ANC, casting aside and working against any ANC leaders committed to reform and change through peaceful political means. And let’s NOT forget that the Communist governments of both Cuba and China were the ones helping and funding the ANC in these endeavors, and that Mandela was offered years before his actual release, the chance to walk out of prison a free man if he would publicly denounce violence…which he refused to do. 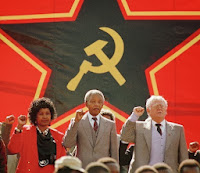 Sometimes when in doubt a picture can speak louder than any words, and this photo of Nelson Mandela standing beneath the Communist hammer and sickle alongside Joe Slovo…a leader of the SACP…with both men having their hands raised in the Communist clenched fist salute…speaks volumes. When this photo was taken, Mandela said in a loud and clear voice, “I salute the South African Communist Party for its sterling contribution to the struggle for democracy.” And to make this even worse, Mandela had many times toured South Africa with Slovo repeating the same words...raising the same clenched fists in Communist unity.

More recently…as in just a few years ago…Mandela was seen singing an ANC/MK genocide song about killing whites…so much for reconciliation I guess. 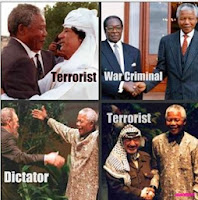 But the bottom line is that these things…both good and bad…Nelson Mandela did he did for South Africa NOT for the United States of America…and herein lies the issue for Nelson Mandela was NOT a friend to America. In fact, Mandela...a staunch supporter of Saddam Hussein …vocally opposed the Iraq War and what he called ‘American imperialism.’ Mandela called GWB “a president who has no foresight, who cannot think properly,” and accused him of “wanting to plunge the world into a holocaust” by going to war in Iraq. “All that (Mr. Bush) wants is Iraqi oil,” he said time and again. He also criticized the “War on Terror” and the labeling of individuals... muslims…as terrorists without due process. Mandela spoke of and criticized racism in America forgetting his own country was racist on both sides…whites against blacks…blacks against whites. And Mandela embraced America’s enemies in his refusal to denounce Cuban dictator Fidel Castro, Libyan Colonel Muammar Gaddafi, or PLO leader Yasser Arafat…a known terrorist…who he called “a comrade in arms.”

No, Nelson Mandela was NOT the peaceful saint the media and some world leaders…like Barack HUSSEIN Obama…are portraying him to be so why should our country’s highest show of respect and honor…the flying of our flag at half-staff…be done for him…it simply should NOT, for if truth be told Nelson Mandela was plain and simply a Communist revolutionary…everything counter to American ideals and values yet everything that is the epitome of acceptability to the touchy-feely, kumbaya left. 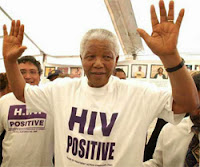 And while Nelson Mandela does indeed have things his legacy should be proud of…like his opposition to racism, support for human rights, and his work on behalf of AIDS victims…due to his actions in supporting violence and in his inability to condemn violence, Nelson Mandela has played a big part in South Africa’s current economic down slide, and in the increase in violence seen all across South Africa and the region.

Sadly, South Africa, a nation who was given a second chance with the end of apartheid, has now become because of the ground work laid by Nelson Mandela and the ANC, and because of his NOT condoning the ongoing violence in his country…just another country on the verge of becoming a Socialist/Communist state. And that is Nelson Mandela’s true legacy and reflection on the man…a legacy of a man who while surviving 27 years in prison is NO friend to America, and as such does NOT deserve the honor of having our American flags flying at half-staff for him…period.

Yet may he Rest in Peace for like all of us Nelson Mandela will answer to God for both his actions and inactions…and to God alone.