Two stories under reported or NOT reported on at all                  By: Diane Sori
While everyone including the media is preoccupied with 'ducks' here are two important stories you will NOT see on the alphabet media and even FOX is giving but cursory coverage to one...NO coverage at all to the other.

The first is that four men have been arrested and charged with murder in the death of Dustin Friedland, the man who was shot in the head in front of his wife after a day of Christmas shopping at an upscale New Jersey mall.

Those charged were after Friedland's Range Rover...there was NO reason or need to kill him over a car...NONE at all. But even that is NOT the whole story for this story also encompasses political correctness gone awry, catering to the enemy, and the deafening silence of race-baiters Barack HUSSEIN Obama, Jesse Jackson, and Al Sharpton.

Those being charged with Freidland's murder are Hanif Thompson, Karif Ford, Basim Henry, and Kevin Roberts. Three of the four have islamic first names (probably prison converts), all four have a long and violent criminal history including jail time (Hanif Thompson was released from prison just four days before the murder), and all four are black. I'll say it again in case some missed it...four black men, three with islamic first names, and all with a violent criminal history, shot and killed in cold blood Dustin Freidland because they wanted his car...and because he was white.

And the media has NOT reported any of these critical details...even FOX will show their photos but will NOT say the words 'they were black muslims' as they too are afraid of being called racists...are afraid of stepping on muslim toes...and are afraid of retaliation for speaking the truth.  Shame on FOX and shame on them all.

This year there were 450 carjackings in the same area of New Jersey where this latest one occurred... in the same area that surrounds predominately black, lower-class Newark, NJ, and the vast majority of cars stolen were owned by whites...facts that are indisputable yet facts that are NOT being reported. And with black on white crime increasing all across America this lack of reporting is absolutely unacceptable. So while we get a few sporadic reports about the 'knock-out game' even then race is just touched upon in those reports...gang violence they call it...yet race is at the heart of all the attacks...and at the heart of all the building hate and atomicity in today's America.

Reverse racism is spreading across our country fueled on by the likes of Barack HUSSEIN Obama and his buddies Jesse Jackson, Al Sharpton, and the other well-known white hating race-baiters. America's racial wounds were healing...that is until Obama deliberately ripped them open again just to serve his leftist political agenda.

And this newest round of racial tensions started a few years ago with Obama inserting himself into the Trayvon Martin case when he said on national television, "If I had a son he would look like that Trayvon Martin" thus drawing a line in the sand that he hoped white America would dare NOT cross.

And most did cower in fear of him...the bought and paid for media included for they dared NOT go against America's 'supposedly' first black president. And this very same media is part of the root cause of today's problems for in their NOT doing their jobs...in NOT reporting the facts as they truly are...the media directly helped empower and embolden this new wave of race-based crime.  And it all started with the media's NOT staying on top of and pressing the story that our racist AG Eric Holder refused to prosecute the New Black Panthers for voter intimidation during the 2008 election, and for his out-and-out refusal to prosecute current black on white crime,

And while many on the left ignore when the likes of Jesse Jackson and Al Sharpton spew their white-hate thus helping to stir the pot of racial tensions...these same leftists continue to place blame for this current wave of black-on-white crime on America’s 'gun culture' instead of where it belongs...on the murdering black thugs who have been fueled on in their hatred of whites by their 'supposed' black leaders...those very same 'supposed' black leaders who remain mum every time a white person is murdered by a black.

Now my question while we wait for some white, politically correct, liberal public defender to plead these four pieces of human garbage NOT guilty is do these four bast*rds also look like the sons Barack HUSSEIN Obama wishes he had...just wondering. 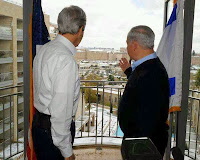 The next story is NOT being reported on at all by any of the media and it concerns Israel and Obama's newest act against them.  Secretary of State John 'Swiftboat' Kerry was in Jerusalem on Friday as part of Obama's efforts to reach a deal for a Palestinian state by April (like that will ever happen), when he oh so under the media radar presented Israeli leaders with Obama's newest plan for muslim disputed East Jerusalem. In his plan Obama calls for an international administrative mandate to control both Jewish and muslim holy sites in the now Israeli-controlled capital of their country.

Now remember, the muslims have NO right to Jerusalem...neither Biblical rights nor legal rights...and that while the exact wording of the mandate is open for discussion ...so says John Kerry...he did push Obama's recommendation that a coalition of controllers, including the Vatican (who want control over a building called the Cenacle believed to have been where the Last Supper took place and built on the remains of the Church of God on Mt. Zion), and that muslim countries Turkey and Saudi Arabia be in charge of Jerusalem.

Claiming this would be a temporary solution for about three years tops while security issues between the Israelis and the so-called, non-existent Palestinians are finalized, Israel has rightly turned a cold shoulder to this abomination of a plan for how dare Obama try to take Israel's holiest city away from them...how dare Obama do this to appease and cater to his muslim brethren who in turn are Israel's enemies...how dare Obama try to do this for all of Israel...including its capital of Jerusalem...belongs to the Jews and the Jews alone, and the muslims be damned for Jerusalem will NEVER again be divided...period.

BiBi will make sure of that and Barack HUSSEIN Obama will NOT be happy when he does, especially in light of the fact that yesterday Israel announced that they're furious with Obama's and the NSA's spying on them. So Obama would be wise to heed this warning as Israel is quite fed up with him and his muzzie loving garbage.

So there you have two important stories lost amongst the field of 'ducks'... time to focus people for these two stories that the media is NOT reporting on...at least NOT fully...have the potential to really change the discourse and direction in which our county is going.
Posted by Diane Sori at 12:05 AM