Op-ed:
Maybe this time the SCOTUS will get it right... but I'm NOT holding my breath
By: Diane Sori

While the Supreme Court has refused to consider the case brought by the state of Arizona challenging the 9th Circuit Court's ruling that abortions can take place after 20 weeks gestation, arguments made on behalf of Noel Canning...an Oregon-based soft drink bottling and distribution company...who was facing National Labor Relations Board (NLRB) and local Teamsters union sanctions... have been accepted and are in the process of being heard by the High Court relating to the issue of Obama crossing the boundaries of executive power in regards to recess presidential appointments.

But the big question is will Chief Justice John Roberts be the deciding vote once again...this should be interesting as he owes us big time for his mother of an ObamaCare screw-up.

Seriously though, the man who claims he and only he gets to decide what constitutes when Congress is in session is now facing our nation's highest court over the Republican claimed...and rightly so...illegal abuse of power when he tried to usurp even more power for himself by appointing three pro-union members... Richard Griffin Jr., Sharon Block, and Terence F. Flynn...to the National Labor Relations Board on January 4, 2012, which in turn resulted in the Noel Canning case being filed. 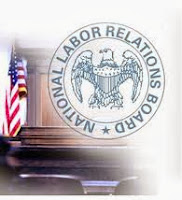 At the heart of this matter is Obama's claim that the Senate Republicans' refusal to allow votes for nominees to the NLRB and to his new Consumer Financial Protection Bureau led him to make the temporary recess appointments, but NO excuse justifies Obama's abuse of power that is in violation of the Constitution. And while abusing what are his granted powers is NOTHING new for Barack HUSSEIN Obama, this is the first time in our country's history that a standoff between the White House and congressional Republicans...a political stalemate if you will...has reached the Supreme Court. And so now the Court will hear oral arguments and rule on the meaning of the very Constitutional provision that gives the president permission to make temporary appointments to positions that normally require Senate confirmation. But...and this is critical...those appointments must be made when the Senate is in recess, yet the day before the appointments were made Congress had technically begun the second session of the 112th Congress making what Obama did unconstitutional.

And that is the sticking point for when Obama made these appointments the Senate was NOT in recess even though his narcissistic self considered and ruled them to be. But the fact is that the Senate was still holding 'pro forma' sessions every three days, and during 'pro-forma' sessions (when the upper chamber is briefly called to order and then adjourned) NO formal business is to be conducted, and 'supposed' Constitutional professor Barack HUSSEIN Obama should have known that.

Briefly, a 'pro-forma' session fulfills the obligation under the Constitution "that neither chamber can adjourn for more than three days without the consent of the other." And as the Senate was indeed still in session NO recess appointments should have been made...period. And while Article II, Section 3 of the Constitution gives the president, the power to "on extraordinary occasions, convene both Houses or either of them," this power is only to be used during emergencies and appointments to the National Labor Relations Board is NO emergency NO matter how Obama tries to claim it is...and the justices know this...at least if they are unbiased and Constitution abiding they do.

This past January, the U.S. Court of Appeals for the District of Columbia Circuit, along with two other federal appeals courts, ruled that the Labor Board appointments were indeed “constitutionally infirm” because they were NOT made during “the recess of the Senate,” nor had a required vacancy occurred within that same time period...something that Obama chose to ignore. So as per this ruling it's made clear that Obama overstepped his executive power bounds by declaring the Senate in recess, then making three appointments that are technically illegal because NO vacancy had occurred. And he needs to answer for this as the president swears an oath to ''uphold and defend the Constitution" NOT to change it at will so he can stack the deck with his left leaning liberal buddies.

And there's a lot on the line here because the justices have the power to either give credence to or stop the president's recess made appointments. And if they rule against Obama...as they should if they follow the letter of the law...hundreds of NLRB decisions made over the past two years could now be rendered null and void as arguments made by attorneys with the U.S. Chamber of Commerce...who will argue on behalf of Noel Canning...will show that the NLRB operated without a quorum for well over a year, thus causing mass confusion for both employers and employees...and that is the very case and position that allowed for the charge that Obama overstepped his bounds to reach the Supreme Court.

And in a surprising statement, Justice Elena Kagan, an Obama appointment said, “It really is the Senate’s job to determine whether they’re in recess or whether they’re not.” Could this be an inkling that maybe the Supreme Court will for once side with the Republicans...we can only hope.

So, if the justices uphold the lower court ruling, it would make it nearly impossible for a sitting president to use the recess power, and under such a ruling future presidential nominees could be blocked indefinitely when the president's party does NOT control the Senate. But when we have a president like Barack HUSSEIN Obama that would serve this country and 'We the People' well.