Obamacare: the death knell for people with cancer
By: Diane Sori

“‘The chronically ill and those towards the end of their lives account for potentially 80% of the total health care bill. We have to have a very difficult conversation about this."
- Barack HUSSEIN Obama, April 29, 2009


ObamaCare...passed before it was read by the very same Democrats who are now trying to distance themselves from it.

ObamaCare...a law conceived in the bowels of hell by a man who plays footsie with the devil for only a man of pure evil would willingly and knowingly hurt and punish the most vulnerable amongst us.

ObamaCare...a health care plan whose dictatorial monetary blood-sucking will disproportionately fall on those with serious medical conditions, especially those with cancer. What most people do NOT realize is that ObamaCare contains provisions buried deeply within its thousands of pages that directly zero-in on cancer patients whose treatments self-anointed Dr.Barack HUSSEIN Obama perceives as being too costly. Too costly solely because monies needed to treat cancer patients takes away from the monies needed to supply the freebies and handouts he's promised to those whose party loyalty ObamaCare has bought.

And so ObamaCare has now become a crap shoot for those with cancer, for it will be the Obama decreed 15-member government panel that decides if a cancer patient is worthy of being treated...in other words if they're a good enough risk to spend government money on as they will NOT waste money on someone who is NOT what they deem 'productive' and who will most likely die NO matter what treatment they're given. Bureaucratic God-playing with people's lives...the 'death panels' come to life.

And for me this is personal as my BFF is a cancer survivor...a good friend is on the verge of remission (but NOT quite there yet)...and a very dear friend will most assuredly die if NOT gotten into a clinical trial.

Clinical trials...something that ObamaCare has its 'evil eye' focused on. Many cancer patients unresponsive to conventional treatment do apply for clinical trials for that simply is their last hope for survival. But these are the very patients who should be the most leery of anything even lurking in the shadows of ObamaCare, because their care while in those clinical trials most likely will NOT be covered if it's outside the ObamaCare decreed acceptable network of doctors, specialists, and hospitals. This means the monies needed to stay in the trial will have to come out of their pockets and know that some clinical trials are expensive...very expensive. And the simple fact is that top cancer doctors, specialists, and hospitals involved in clinical trials are backing away from taking any and all ObamaCare sanctioned insurance plans...and rightly so as the ObamaCare plans do NOT even cover the actual cost of what the doctor or hospital lays out, never mind any profits that might have been involved.

And the nature of ObamaCare itself actually makes it harder if NOT impossible for cancer patients to seek out the specialists who are the ones doing the very clinical trials that can save their lives as ObamaCare forces offered health care plans to reduce spending by limiting the doctor choices those cancer patients have. And why...in order to reduce the cost of the insurance policies of those NOT sick whose premiums are needed to meet the cost of those who are sick...the classic case of taking from Peter to pay Paul.

And while Section 2709 of ObamaCare states that, "starting on January 1, 2014, health insurance providers may no longer deny individuals participation in clinical trials, deny coverage of routine costs and services furnished in connection with participation in research, or discriminate against individuals on the basis of participation in clinical trials" it does limit coverage to ObamaCare "approved clinical trials" only...meaning a phase I-IV trial that is federally funded or one that is conducted under review by the FDA...translation: NO independent clinical trials will be covered at all...the very clinical trials that many times are the most successful. But even those ObamaCare sanctioned clinical trials will NOT cover 'investigational products' that are normally supplied by the sponsor...so guess who has to pick-up the costs... once again it's the very patient who is fighting for their life and who has probably already laid out huge sums of money (co-pay expenses) for treatments that did NOT work. 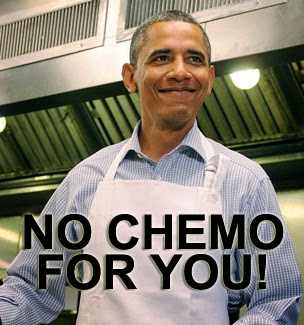 But still 'the sponges' will get any and all things they need for free (they just have to walk into any ER in this country to do so) while cancer patients undergoing treatment will still continue to be cancelled from their current policies, and when forced into ObamaCare they will face outrageous policy cost increases. And while even the terminally ill cannot be denied coverage under ObamaCare they can be denied treatment as per ObamaCare's 'death panels and rationed medicine.' And denying these people treatment with all the expenses involved in keeping them alive is yet another way to keep the costs down for the young healthy people they need to help finance ObamaCare.
And don't for a minute think 'death panels' don't exist...they do...they're just NOT called 'death panels' for obvious reasons but are referred to as 'patient review boards.'

And cancer patients are NOT the only ones affected by ObamaCare...MS patients, Parkinson's patients, cystic fibrosis patients, and many others with still incurable diseases will be 'reviewed' by a board of DC bureaucrats to decide who is deserving of cutting edge treatment done through clinical trials and who is NOT... whose life will end with the swipe of a pen and who can live a bit longer. And while these diseases remain incurable the lives of these people can be extended... sometime for years...with the new 'breakthrough' drugs being developed. However, ObamaCare also targets for cuts the very drugs that are at the heart of the clinical trials that just might save those people's lives.

And remember, these diseases know NOTHING of party affiliation...they hit across the political spectrum, the racial spectrum, the economic spectrum, and they hit all age groups, making the fallout from ObamaCare non-discriminatory in who it hurts...and the longer this nightmare of a law is in existence the longer people will suffer and die as they and their families have to deal with ObamaCare's many nefarious ramifications.

So the bottom line is that the millions of Americans who have cancer, as well as those with other debilitating diseases, and who had insurance policies that covered their treatments...including clinical trials....before ObamaCare reared its ugly head will now have to face the dreaded 15-member panel of bureaucratic Obama-sanctioned pencil-pushers who deem themselves God, and who will make the decision of who amongst the severely ill will live and who amongst them will die.

And any system of health care that has the government playing a role...any role...in deciding how much care a person can have at what they have deemed is the end of that persons life is indeed a 'death panel'...period.
Posted by Diane Sori at 12:04 AM