"This is not a threat: this is actually the declaration of war to my country."
- Ukraine's Prime Minister Arseny Yatsenyuk

Oh dear...Vladair Putin must be shaking in his boots...sarcasm intended...as John 'Swiftboat' Kerry condemned what he called "the Russian Federation's invasion and occupation of Ukrainian territory."

And with those words out of the mouth of an American traitor, Russia's Parliament signed off on Putin's request to send military forces into the Ukraine. Now the next move is Obama's in this high stakes chess game of who will get checkmated first...the U.S. or Russia. But with Putin building up his military and Obama downsizing ours the answer seems quite obvious.

The Cold War has indeed returned thanks to the weak military stance of Barack HUSSEIN Obama, but this time with a fuse ready to be ignited into a full blown war as the Ukraine is the fault line lying between the Russian East and the American West.

And with Obama's and the Western response being for the most part symbolic at best...as in putting plans on hold to attend the upcoming G8 summit in Sochi (big freakin' deal)...and with a few countries recalling their ambassadors...Putin must be sitting back in his chair laughing his head off for here Russian armed forces have already crossed a sovereign nation's borders with the intention of militarily taking over that country, and Obama's response is but a slap on the wrist. But Putin is also a bit of a blowhard and braggart...just like Barack HUSSEIN Obama is...who will call down his military if and only if he gets the Ukraine back under his control just by utilizing threats of war. And rest assured that Vladimir Putin knows how to turn threats into his wanted reality...remember how he manipulated the Syrian WMD disarmament agreement while he further emasculated Obama...and unfortunately America...in the eyes of the world.

Also remember, Putin has wanted to reabsorb the Ukraine back into the Russian motherland for a long time now for the Ukraine is considered the 'cradle' of Russian civilization, and bringing it back into the Moscow fold would seal his goal of returning Russia to her former glory as a superpower NOT to be messed with. And now that it's plain to see that Putin's in control of the game as Obama bloviates that "Any violation of Ukraine’s sovereignty and territorial integrity would be deeply destabilizing, which is not in the interest of Ukraine, Russia, or Europe," with NOT a word being said of the possible effects this could have on the U.S. or our allies, this translates into Barack HUSSEIN Obama basically giving Vladimir Putin free reign to do as he so chooses in regards to the Ukraine and her 46 million people.

"It's a naked aggression against Ukraine" said Ukraine's interim President Oleksandr Turchynov in a personal appeal to Putin to stop his military intrusion and withdraw from the Crimea...but his pleas are being met with deaf ears as Russian troops go deeper into Ukrainian territory.

And so with words coupled with a lack of action similar to his inaction when the Iranian students protested for freedom just a few short years ago, Barack HUSSEIN Obama has turned his back on yet another nation fighting for its freedom, and know that the Ukrainians will NOT forget this.

And as conflicted reports leak out that Russian troops have taken over control of Kiev's Simferopol International Airport, tensions are running very high and are ready to boil over into full-fledged war. So even though the Ukraine's Defense Ministry has ordered a call-up of its reserves...meaning all men up to age 40...it's a given that the Ukraine cannot stand alone against Putin's army and naval forces...armed forces that Putin has spent billions to upgrade and modernize after they were decimated by the breakup of the old Soviet Union. In fact, Moscow's 'special units' are equals to that of our own, and that does NOT bode well. And with NATO unwilling to send in troops to help stabilize the Ukraine, and with Obama vowing NOT to get the U.S. militarily involved coupled with Putin's large scale combat 'readiness exercises' involving 150,000 of its troops still in progress along its western and southern land borders, Cold War brinkmanship is coming dangerously close to the explosive stand down of the U.S. vs. Russia during the Cuban Missile Crisis.

And adding to this situation is the fact that the Ukraine's population has divided loyalties between Russia and the West, with the western Ukraine wanting closer ties with the European Union, while the eastern and southern regions want to stay aligned with Russia. 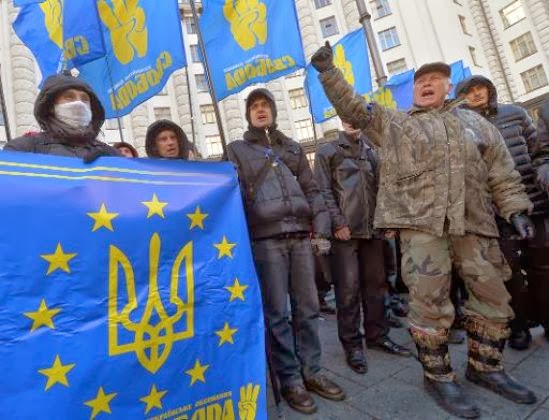 And guess what is the true basis for all this current atomicity...energy. Energy and dollars...energy in the form of oil and natural gas for a country that is the chief conduit of Russian natural gas to western Europe...and monies the Ukraine needs to avoid default.

And while the Ukraine has appealed for help from NATO...and been refused...as well as to Britain and the U.S....co-signers with Moscow to a 1994 accord guaranteeing Ukraine's security after the breakup of the Soviet Union...the International Monetary Fund has said it is "ready to respond" to the Ukraine's needs of $35 billion to avoid default.

But even that is too little too late for the bottom line is that in the end Putin will retake the Ukraine one way or another as Obama sits back, watches, and basically does NOTHING to help a country who already had won it's freedom from Russia and wants desperately to keep that freedom. Maybe if we could have threatened retaliation with a military to be feared and respected...like the one we used to have before Barack HUSSEIN Obama took office and as their Commander-in-Chief demoralized, shamed, and defamed those who he has forced to fight with their hands tied behind their backs (and our enemies know that)...we could come to the Ukraine's aid with force instead of just blowing hot air consisting of mere useless words. But the fact is that we NO longer can as the budget cuts being done are being done at our military's expense, and brings us to levels of an army as small in numbers as those of pre-WWII...numbers so small that it leaves us dangerously close to NOT even being able to protect ourselves.

And I can guarantee that if we had a president to be feared and a military that was allowed to fight to win, Vladimir Putin would NOT be doing what he is now doing...and that is something Barack HUSSEIN Obama built and owns...period.
Posted by Diane Sori at 12:00 AM