Op-ed:
Putin vs Obama...and the U.S. and Ukraine are the losers
By: Diane Sori

"Military action would be completely legitimate because it was at the request of the President Yanukovych." - Vladimir Putin

"I am Russian. I don't need protection." - Russian protester living in the Ukraine opposed to Putin's efforts to retake the Ukraine

And so as Russian forces encircle Ukraine with Russian fighter jets having entering Ukrainian air space...and with Russian troops having seized control of Crimea including surrounding Ukrainian military installations all while regaining a much wanted warm-water port...Barack HUSSEIN Obama still does NOTHING to stand strong while Putin sends warships into the Black Sea.

Bottom line..Putin has won this round of the chess game against America's cowardly wimp that is our president. And while Obama and his shills continue to bloviate meaningless words a new...or should I say a 'reborn' old super power has emerged...damn you Obama...damn you as this is indeed all of your doing.

All of Obama's doing because he does NOT have the guts or courage to stand strong against Vladimir Putin...albeit a communist Putin proves once again that he is more of a man than Obama will ever be.

And while Obama administration officials called the deployment of Russian troops to Crimea an "uncontested arrival" rather than an invasion, Putin said his troops were deployed as a response to an "unconstitutional coup." Claiming that the pro-Russian former government in Kiev was illegally overthrown and that President Yanukovych (the man Putin regards as Ukraine’s legitimate president) asked him for military help, Obama does NOTHING but waste time questioning if this has any ring of truth to it all while Russian troops continue to settle into Crimea. But the question remains will the Russian troops move north into Kiev...a city free from Russia's orb for years, sadly now on the verge of again falling within it...or will Putin be happy with just retaking Crimea.

Something tells me NO for Ukraine has always been a hot button issue for the Russians ever since the breakup of the Soviet Union more than two decades ago. And when you add in what was an administrative turnover of Crimea to Ukraine in 1994, Ukraine is and will always be thought of as the 'cradle' of Russian civilization ...the 'cradle' that must be returned to the motherland.

Remember also that in the all-important power game between nations... especially between old Cold War foes...Russia is but a single country without Ukraine but with Ukraine the Russian empire is indeed reborn.

Putin knows this and he is now flexing his muscle against the U.S and specifically against Obama...who he knows has NO backbone or will to stop him. Putin has played his hand cleverly and calculatingly and is now saving Russian 'face'... rebuilding Russia as a superpower to be feared...to be respected...and is doing so while Barack HUSSEIN Obama bloviates about useless economic sanctions... economic sanctions that simply do NOT work.

A case in point is Iran, a country economically sanctioned for many years now. And while Obama and crew claim it was these sanctions that brought Iran to the negotiating table, the truth is that Iran, with their strings being pulled by Putin, had Putin turning the disarmament game in his favor by his using Syria as a deflection tactic to keep American eyes focused on the Middle East while he successfully implemented what was always his main goal...bringing Ukraine back into the fold. And know that what Putin wants Putin gets...one way or another and that he will keep what he conquered, because for Putin to give up Crimea now would mean the end of his presidency, as it would mean 'the Bear' backed down and former KGB colonels do NOT back down...ever.

So are we on the 'Eve of Destruction'...the start of WWIII perhaps...I don't think so for when all the bravado and chest pounding is stripped away on all sides this incursion into Ukraine is primarily two-fold...first, Putin is trying to secure his warm-water naval base and destabilize Ukraine's government NOT actually trying to set the stage for a total annexation or invasion of Ukraine...and second, Putin wants to control the European and global economies...as in energy prices and the prices of equities. And by accomplishing this, as an added bonus Putin gets to rebuild Russia as the world's number one superpower stepping over Obama and the U.S. in the process for he knows that Obama will NOT stop or deter him. 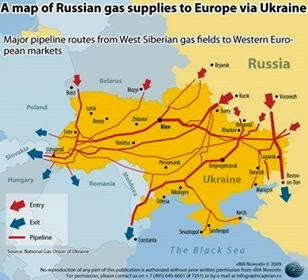 And those who think Putin doesn't have Europe by the throat right now are horribly mistaken for more than 33% of the gas used by Europe flows from Russia through 18 Ukrainian pipelines into Europe...translating into he who controls the pipelines controls the income that goes along with them. Couple that with the growth of Russia's economy because of oil and gas exports into Europe, and Putin can now manipulate a more aggressive foreign policy as he economically holds Europe hostage, especially when it's played against one who will NOT oppose him.

Remember back when these infamous words of Obama's were caught off mike in March 2012..."After my election I have more flexibility..." as in did Obama know that Putin was planning this maneuver two years ago (this was NO last minute decision on Putin's part as it required careful planning) and was a deal made for the U.S. to look away. Obama's response or lack thereof leads one to believe there is more to this than simply meets the eye for how did our intelligence community miss this...I mean they had to know Russian naval ships were moving into position.. they had to know Russian troops were amassing along Ukraine's border...these are NOT things that can be hidden...they had to know but were they ordered to look away...with this administration anything is possible.

And we all know that Obama orchestrates foreign policy NOT in America's best interests but in the best interests of the enemy and if that means selling out to Putin to manipulate confrontations in the Middle East...especially confrontations with Iran and Syria...if it aids in Obama's oh-so-wanted sell out and elimination of Israel in the process than so be it.

And while yesterday NATO and Putin agreed to hold talks on the Ukraine on Wednesday, Putin continues to insist he is doing what needs to be done to protect Russian citizens living in Ukraine, but in a sign that he might actually be trying to defuse tensions to some degree, Putin has ordered troops conducting military exercises near Ukraine's border with western Russia to return to their bases.

And Putin's doing this all while he claims there are NO Russian troops in Ukraine or in Crimea, but pictures say what words lie...and the games continue with Ukraine's people the losers.
Posted by Diane Sori at 12:01 AM