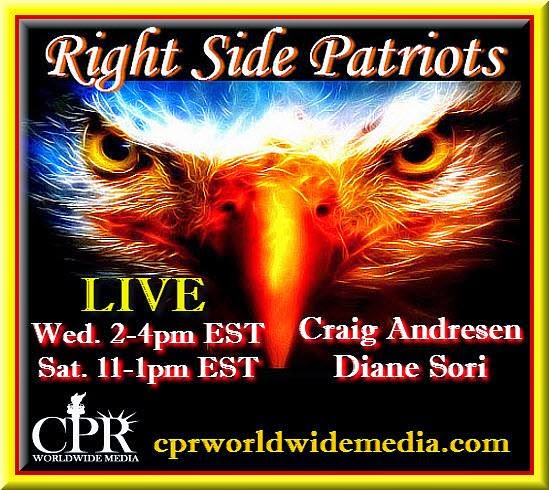 Today at 2pm, Craig Andresen and I will be up and running on RIGHT SIDE PATRIOTS on the CPR Worldwide Media http://cprworldwidemedia.com/live-radio/ and we will talk about Craig and my, and CPR station owner Michael Collins-Windsor, now being considered "possible national security threats" and for NO other reason than because we dared to expose the truth...as we saw it...concerning all things Benghazi and the feds land grabs.

For anyone who has NOT seen Craig and my Benghazi and Land Grab series, below are the links and see for yourself what we discovered...and we believe it will put all the puzzle pieces together.

Don't miss RIGHT SIDE PATRIOTS today at 2 pm on CPR Worldwide Media http://cprworldwidemedia.com/live-radio/ and all will be explained...and it will absolutely blow your mind as this administration has totally run amok against 'We the People.'
Posted by Diane Sori at 12:16 AM